Comment on the effects of Dickens’ choice of language and form. Explain and discuss how these two sides of Scrooge reflect the society of the time and the treatment of the poor. In the book ‘A Christmas Carol’, by Charles Dickens, there is a stark contrast between Scrooge, the main character, in Stave 1 to the Scrooge he becomes in Stave 5. However, this change is not the only one, there is also a change in how Dickens uses his literary techniques to emphasize the change in Scrooge.

These techniques consist of Dickens’ use of verbs and adjectives intertwined with his abundance of similes and repetition. Dickens also uses punctuation to help the reader feel the atmosphere shown in the book. The book also hints at how the poor were treated at the time, the rich would refer to them as the ‘surplus population’ which are the exact words taken from ‘Essay on the Principle of Population’, written by Thomas Malthus, and are the precise words quoted by Scrooge in ‘A Christmas Carol’.

Books and films have been based on the book ‘A Christmas Carol’ long after it was written, all because of the moral behind the story. What I think Dickens’ intentions were when he wrote the story was to show everyone, that the poor are just as important as the rich. And I believe that his main influence for ‘A Christmas Carol’ would be because when Charles was 11, his father, along with his family (except for Charles) was sent to prison for being in debt.

Consequently, Charles had to work for 12 hours a day, six days a week in a shoe-blackening factory to pay off the debts. Scrooge, I consider, was created by Dickens to try to stop others from having to go through what he did as a child; which is why I think Scrooge is such ‘a squeezing, wrenching, grasping, scraping, clutching, covetous old sinner! ‘ in Stave 1. So that all the ruthless executives who paid their workers a minimum wage and forced them to work on Christmas day, might change their ways.

In Stave 1, Dickens portrays Scrooge as being miserly towards the poor and those who wish to do well for the poor, as is made apparent when the two ‘portly gentlemen’ ask Scrooge for a donation towards buying the poor some food and water for Christmas. Scrooge’s response is to suggest that ‘those who are badly off’ should go to the Union Workhouses or jail. This reflects on the treatment of the poor at the time and the contempt Scrooge has for the poor was popular amongst well-off people at that time.

In Victorian times, London was very unhygienic and full of disease. This is apparent in Dickens’ writing especially in the use of the verb ‘wheezing’, in describing the manner in which the peasants would move up and down the court. Scrooge is in his office by a nice warm fire at this moment, this emphasizes the extent of the divide between the rich and poor of Victorian London. Dickens uses verbs like ‘growled’ to describe what Scrooge’s feelings are at that time, which I find effective because it leaves more to the reader’s imagination.

Dickens also uses verbs to show the change between the miserly Scrooge in Stave 1 and the ‘fluttered and glowing’ Scrooge in stave 5. Similes tell us a lot about different characters moods and emotions. Similes are often found in Dickens’ novels, ‘A Christmas Carol’ is one such novel. Dickens uses similes like ‘Hard and sharp as flint’ to strongly emphasize how much of ‘a tight-fisted hand at the grindstone’ Scrooge is in Stave 1, this is effective because it informs the reader of Scrooge’s spiteful character.

which contrasts with Dickens’ use of similes in Stave 5, where Scrooge is described as being ‘as giddy as a drunken man’ which is striking because in Stave 1 he is described as being ‘as solitary as an oyster’. This shows a great change in Scrooge, from being a malicious ‘old sinner! ‘ to being ‘as merry as a schoolboy’. Dickens uses repetition to emphasize the feelings of a character at the time. ‘Scrooge ate his melancholy dinner in his melancholy tavern’, melancholy means sad and depressing, Dickens chooses to repeat this word (melancholy) to stress the point that Scrooge is sad depressed and lonely in Stave 1.

In Stave 5 the type of repetition is very different to the repetition used in Stave 1. Where Dickens chooses to repeat the word ‘melancholy in Stave 1, in Stave 5 he chooses to repeat the word ‘chuckle’ which is repeated six times in the one sentence. This emphasizes the fact that Scrooge is happy and full of laughter, this shows a huge change in Scrooge’s character, and helps end the novel on a high note. In ‘A Christmas Carol’, Dickens has acutely used language techniques to highlight the change in Scrooge and the treatment of the poor.

In Stave 1, Scrooge is very miserly towards the poor, however in Stave 5 Scrooge has a complete turn around in the way that he treats the poor. This also leads to some wealthy people in the real world to change their perspective of the poor at the time. This is very important to Dickens considering that he came from a very poor family but Dickens didn’t stop there, he went on to fight for free education for everyone. The moral of the novel is that everyone, rich or poor, is equal and this message still has a purpose in the world today, and will still have a purpose in years to come. 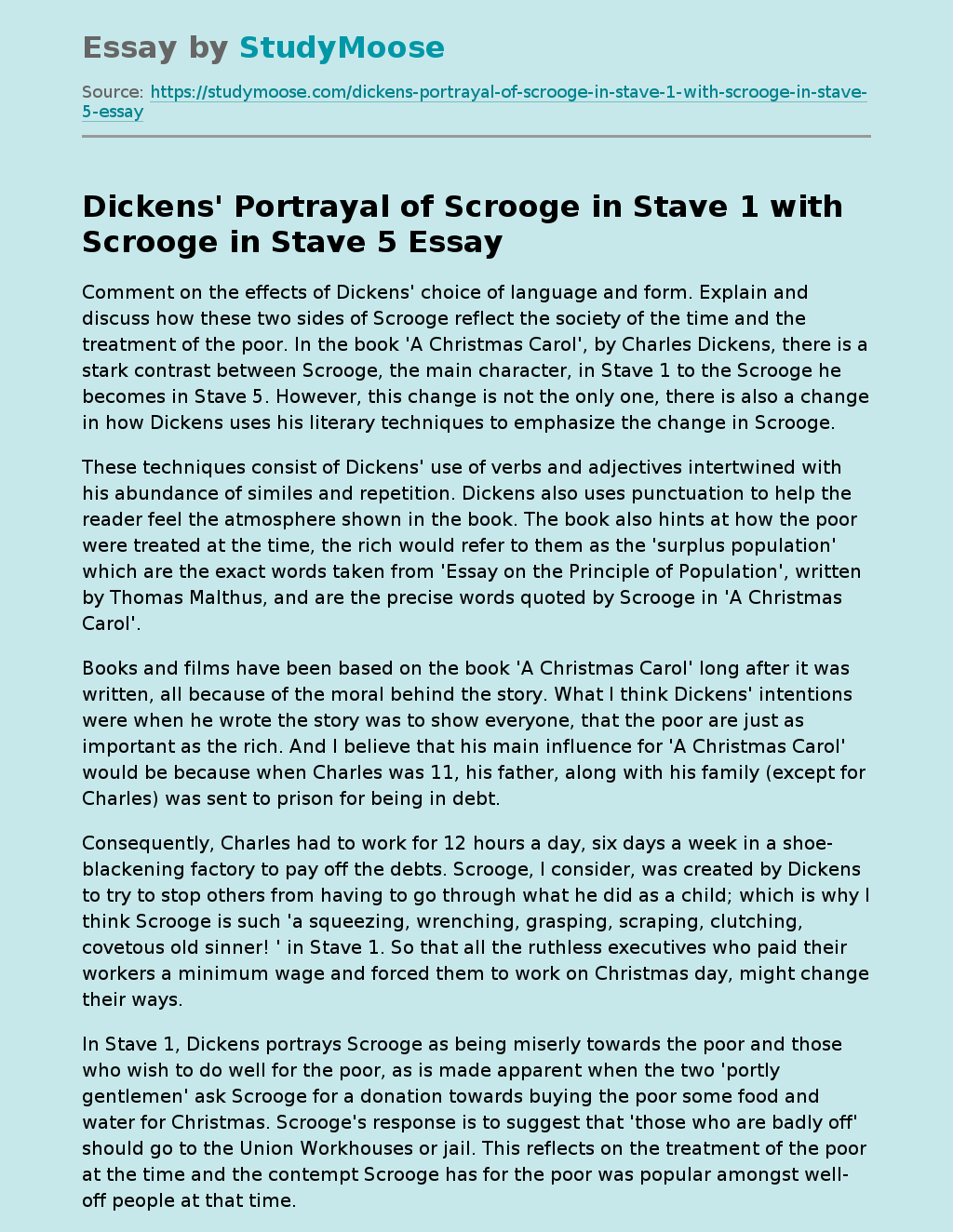