How Does Dickens Create Sympathy For Scrooge In A Christmas Carol?

Early in the book the reader is encouraged to take a negative view of Scrooge through the following type of descriptions “And even Scrooge was not so dreadfully cut up by the sad event, but he was an excellent man of business on the day of the funeral”, this quotation shows that Scrooge is so cold and disrespectful that he would prefer to attend his business than go to his “sole friend”, and partner’s funeral. He was supposed to be the “sole mourner” at Marleys funeral, which makes you pity Marley that no one was mourning his death and despise Scrooge for being so mean and not paying his respects to his dead friend and partner.

Don't use plagiarized sources. Get your custom essay on
“ How Does Dickens Create Sympathy For Scrooge In A Christmas Carol? ”
Get custom paper
NEW! smart matching with writer

Dickens paints a picture of Scrooge in your head with a string of rapid adjectives such as “a squeezing, wrenching, grasping, scraping, clutching, covetous, old sinner! ” This use of negative descriptive language immediately creates an image of him, which makes the reader dislike him.

Dickens uses words that relate to cold in his descriptions of scrooge, “The cold within him froze”, “A frosty rime”, “chill”, “No wind that blew was bitterer” and so on. He uses the word ‘cold’ to put forward a view of Scrooge as a dark, cold, bitter person, and often reminds us of this by using these words throughout the beginning of the text.

In fact between the pages 11 and 13 there are at least 30 words that are associated with the word ‘cold’. Most people enjoy Christmas but not Scrooge, “what’s Christmas… but a time for paying bills without money; a time for finding yourself a year older, but not an hour richer; a time for balancing your books and having every item in ’em through a round dozen of months presented dead against you”.

This outburst of bad points about Christmas shocks the reader. How can anyone despise Christmas so much? This makes you question whether he has any emotions at all.

We feel even more against Scrooge when he asked why his nephew got married and in reply his nephew answered, “Because I fell in love”. Then Scrooge replied, “as if that were the only one thing in the world more ridiculous than merry Christmas. ” So for all the romantics out there this is a very cold, heartless thing to say. There is a complete dichotomy between Scrooge and his nephew one a kind, caring, cheerful man the other a cold, greedy, lonely man Scrooge said one of the meanest comments in the book after being asked to give a donation to the poor.

He asked whether prisons and workhouses were still open and why the poor weren’t there. The men answered, “Many can’t go there; and many would rather die. ” And Scrooge said spitefully, ” If they would rather die … they had better do it, and decrease the surplus population “. At this point we have developed strong negative emotions and thoughts towards Scrooge. Even though the beginning of the story is packed with negative feelings about Scrooge there are some points where you sympathize with him ‘Nobody ever stopped him in the street to say, with gladsome looks, “My dear Scrooge, how are you?

When will you come and see me? ” This partly explains why he has turned out the way he has as he is very lonely. This leads us to reflect on his childhood. He had a very lonely and neglected childhood, “A solitary child, neglected by his friends, is left there still”. You can’t neglect children (this was a serious issue in Victorian Britain) and expect them to grow into caring adults. There are clear parallels between the lonely Christmases of his childhood and Scrooge’s current lifestyle, “solitary as an oyster”, “thin lips blue”.

We understand and sympathize with Scrooge when the ghost of Marley haunts him, Marleys ghost is a stereotypical Victorian ghost, rattling chains, wailing etc. Most people would be scared if his or her dead partner and friend came back to them as a ghost. So was Scrooge although he makes out he had no emotions, “Scrooge trembled more and more”. Marley tried to warn Scrooge not to make the same mistake he did, “I am here to-night to warn you, that you have yet a chance and hope of escaping my fate. ” Yet Scrooge still refuses to listen which shows he is stubborn, “I – I think I’d rather not”, But we can understand this, as he is very scared.

In stave four we are looking through scrooges eyes at people who are criticising him. We sympathise with Scrooge when the men are discussing ‘the dead man’ who we assume is Scrooge. We assume this because they imply the person is very ‘stingy’ even when dead, “Its likely to be a very cheap funeral. ” And that he is rich “What has he done with his money. ” These men are very hypocritical. They are very rich yet they are bickering over Scrooges wealth. These men are mocking and laughing at this ‘dead man’ and then considering just going to the funeral if food is provided, “I don’t mind if lunch is provided”.

This quotation shows that they have no respect for this man and makes us pity him. In the final stave there is a lot of humour behind Scrooge. He has become a kind, giving, joyful man, “I am as light as a feather, as happy as an angel, as merry as a schoolboy. I am as giddy as a drunken man. ” This quotation makes us laugh at Scrooge, but also with him. The reader shifts his emotions and sympathies for Scrooge from disliking him at the beginning of the book, to not being bothered what happens to him towards the middle and finally sympathizing with him by the end.

How Does Dickens Create Sympathy For Scrooge In A Christmas Carol?. (2017, Sep 30). Retrieved from https://studymoose.com/how-does-dickens-create-sympathy-for-scrooge-in-a-christmas-carol-essay 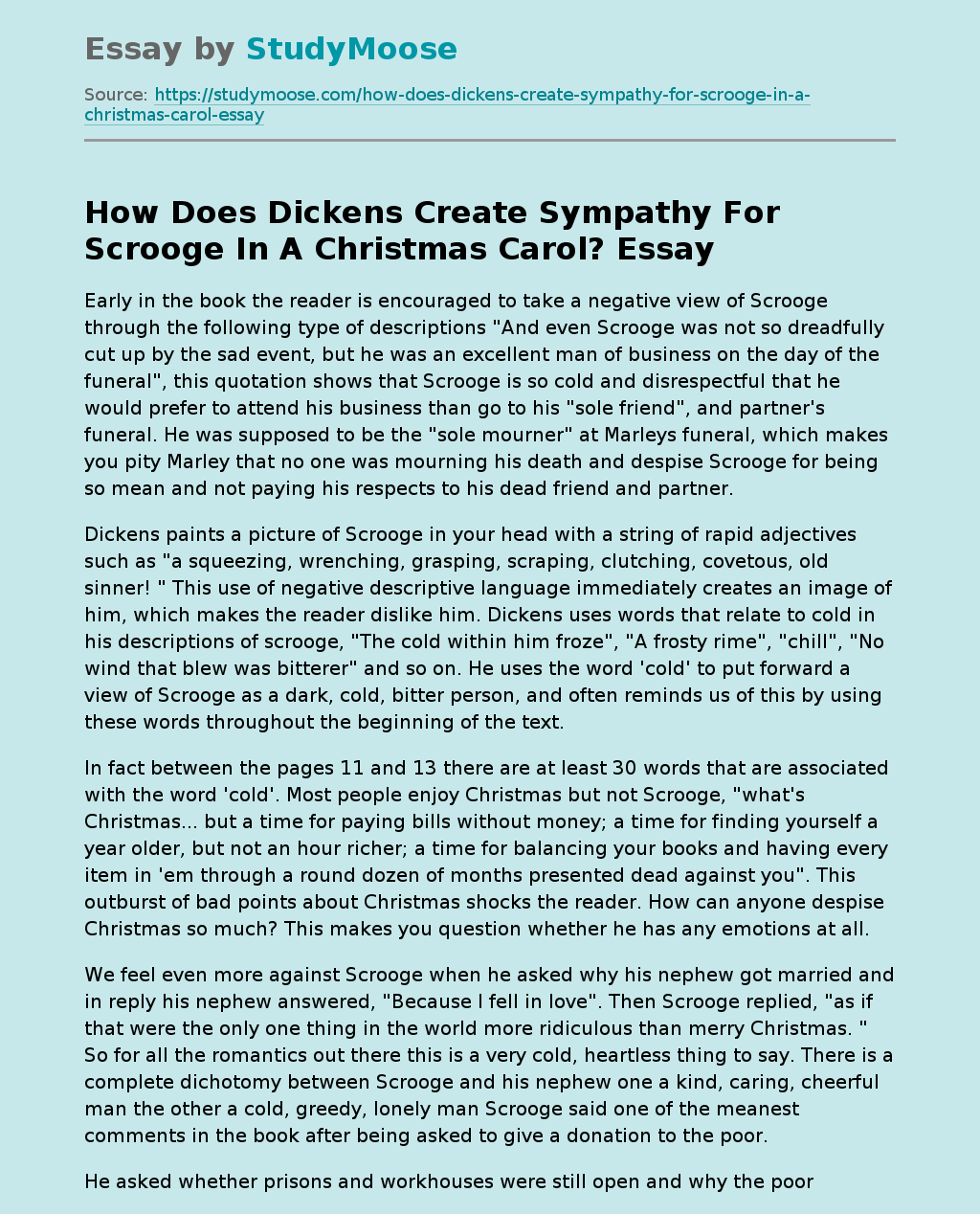