Describe and Evaluate the Multi-Store Model of Memory

Describe and Evaluate the Multi-Store Model of Memory The multi-store model of memory (MSM) is an explanation of the process of memory. Richard Atkinson and Richard Shiffrin first illustrated the multi-store model, in 1968, it explains how we hear, see and feel many things but only a small number are remembered and other aren’t. There is strong evidence of three different stores suggesting that the basis of the MSM is reliable. However there has been some criticism of the MSM, most importantly that the supporting research are not entirely valid.

Don't use plagiarized sources. Get your custom essay on
“ Describe and Evaluate the Multi-Store Model of Memory ”
Get custom paper
NEW! smart matching with writer

For example, memory research usually relates to semantic memory, which would relate to everyday memory activities, yet not all aspects of memory can relate to this. A strength of the MSM is that there is evidence to indicate the duration of the sensory store was collected in a study by Sperling (1960). Participants saw a grid of digits and letters for 50 milliseconds. They were either asked to write down all 12 items or they would hear a tone immediately after the exposure and they should write down al the letters of that row.

The findings showed that their recall was poorer than when asked to give one row only. This theory supported the MSM’s idea that information decays rapidly in the sensory memory store. The original multi-store model is highly criticized for a number of reasons, however the main criticism of the MSM is its oversimplification of the structure and process of the human memory.

The multi-store model is too simple and fails to reflect the complexity of the human memory. The MSM fails to explain how some information can enter the human brain without being rehearsed.

For instance a student can study for an exam for hours and still not remember the info but can read a magazine once and remember all the info. This relates to Craik and Lockhart’s (1972) proposal of a different model to explain lasting memories; they suggested that enduring memories are created by the processing you do, rather than through maintenance rehearsal; things that are processed more deeply are more memorable just because of the way they are processed – ‘elaborative rehearsal’ which a deeper or more semantic analysis.

Later in 1977, Glenberg et al showed that maintenance rehearsal does have some effect on creating enduring memories but not as much as elaborative rehearsal. Scoville and Milner (1957) conducted studies about different areas of the brain involved in different types of memory from studying individuals suffering with brain damage. One case involved a man referred to as HM. The damage of his brain was caused in an operation to remove the hippocampus from both sides of his brain to reduce severe epilepsy.

HM’s personality and intellect remained the same however he could no longer form new long-term memories but could retain memories he had before the surgery. This study suggested that the hippocampus acted as a memory ‘gateway’ through which new memories have to pass through in order to be retained in the long-term. The MSM suggests that short-term memory (STM) and long-term memory (LTM) operate in a single uniform manner, whereas the Working Model of Memory proposed by Baddeley and Hitch (1974) showed that short-term memory is more that just one simple store and consists of different components.

Evidence for a non-unitary STM came from the case study of KF by Shallice and Warrington (1970). KF suffered brain damage, which resulted in difficulty dealing with verbal information in STM but has the normal capability to process visual information, thus suggesting that STM is not a single store. In the case of LTM, the MSM describes it as one single store however this probes questions such as how can memorizing how to play a computer game, what we did yesterday etc are all stored within a single, long-term memory store.

Schachter et al (2000) suggested that there are four different components of LTM; semantic memory, episodic memory, procedural memory and perceptual-representation memory (PRM). Spiers et al (2001) studied into the memory of 147 patients suffering with amnesia, in all cases their procedural memory and PRS were the only two of the four components intact, thus concluding that LTM is not unitary. Another strength of the MSM is the theory that there are separate stores in the memory which are linked to STM and LTM, and specific areas of the brain.

Modern forms of scanning the brain allow images to be captured of activities of the brain, thus enabling us to see what region of the brain is active when a person is doing particular tasks. Research found that the prefrontal cortex is active when individuals are working on a task in short-term memory (Beardsley, 1997) whereas the hippocampus is active when long-term memory is engaged (Squire et al, 1992). Another weakness of the MSM is that it suggests that STM is involved before LTM. Yet according to Logie (1999) STM actually relies on LTM and therefore cannot come ‘first’ as suggested by the MSM.

Ruchkin et al (2003) demonstrated this theory by asking a number of participants to re-call a set of words and pseudo-words (words designed to sound like a real word but with no meaning). Throughout the experiment , brain activity of the participants was monitored and the findings concluded that there were large differences in the two conditions. The evidence showed that there was much more brain activity than if the words and pseudo-words just involved STM, the real words involved much more activity in other areas of the brain. Ruchkin concluded that STM was merely part of LTM which is activated at any given time.

Describe and Evaluate the Multi-Store Model of Memory. (2018, Sep 26). Retrieved from https://studymoose.com/describe-and-evaluate-the-multi-store-model-of-memory-essay 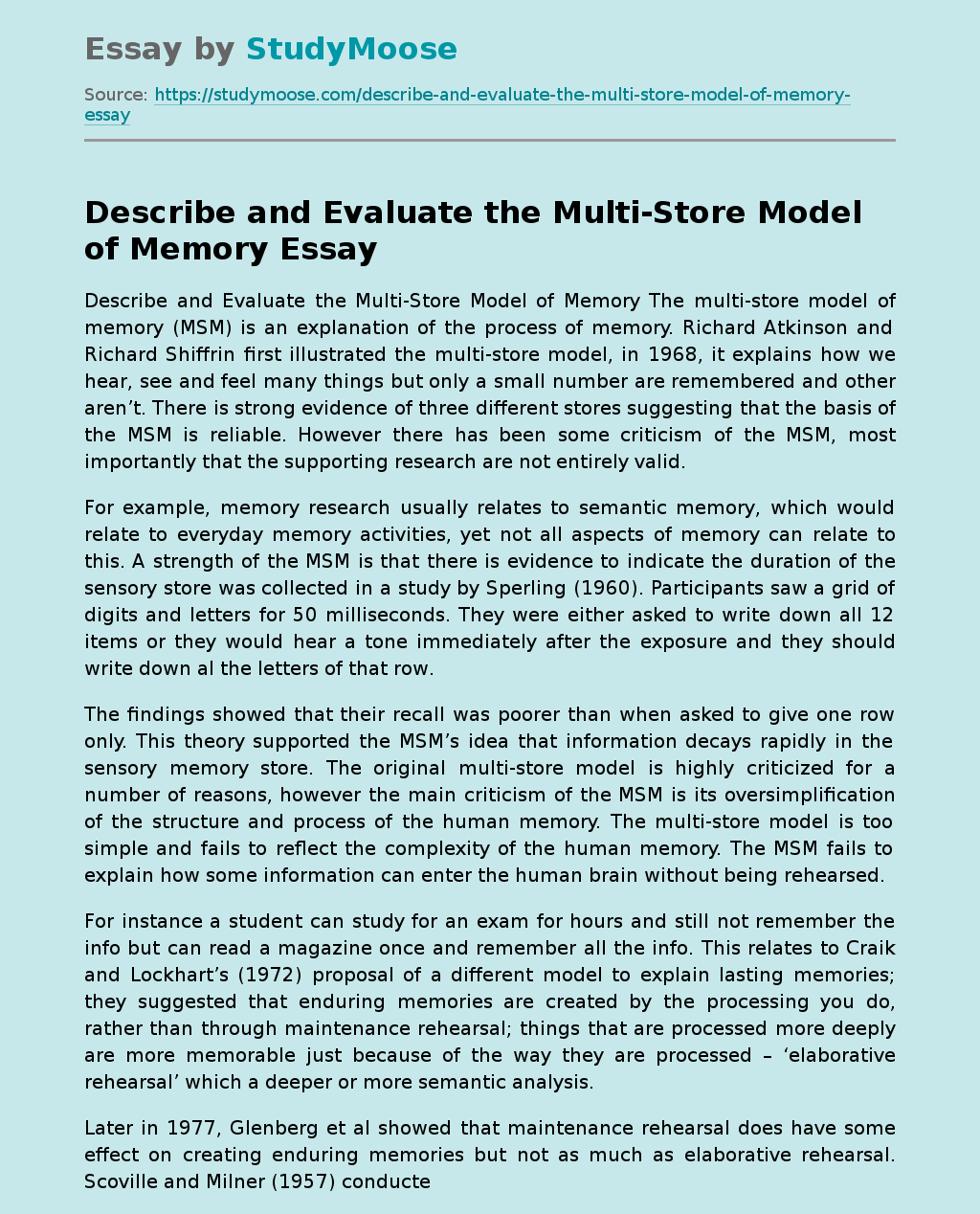