What if one day someone told you, you couldn’t continue studying or work because of your legal status? One day you are considered legal here in the U.S but then the next day you are told that in a few months you are no longer eligible for anything because of your legal status. Some on the opposing sides believe that ending DACA was very beneficial to the U.S because they argue that undocumented immigrants have taken away all Americans jobs and have abused the use of welfare.

Don't use plagiarized sources. Get your custom essay on
“ Deferred Action for Childhood Arrivals or DACA Dreamers ”
Get custom paper
NEW! smart matching with writer

However, the research I have done will prove otherwise through statistics and evidence that DACA dreamers were just trying to build a life here and obtain a better future.

Deferred Action for Childhood Arrivals also known as DACA was created by former President Barack Obama on June 15 of 2012.(ProCon) DACA was created to protect Dreamers, who are undocumented immigrants that were brought to the U.S as children. A campaign that supports dreamers states that DACA protected Dreamers from getting deported, allowed them to work legally, gave them an opportunity for a better education and they were eligible to apply for DACA protection every two years.

Proficient in: Immigration In The Us

This program was a chance for undocumented immigrants to have a better life and provide a better future for their families. As an ADL Article states on September 5 of 2017 current President of the U.S Donald Trump ordered an end to DACA Dreamers. About 800,000 lost financial aid for education, lost jobs and could possibly be deported according to the “Do Something Campaign”.

According to an Article by Todd Krainin, he states that President Donald Trump has said that illegals, who are mostly low-skilled, ‘compete directly against vulnerable American workers’ and that reducing legal immigration would ‘boost wages and ensure open jobs are offered to American workers first.’ Which means that Immigrants are the ones taking jobs away from Americans and that is why they should not be allowed to work. Most of the workers here in America who are defenseless, yes, in fact, are a lot of undocumented immigrants who are high school dropouts but because they weren’t allowed to continue their education, because they want to work hard for a better future. Immigrants have taken away jobs from Americans, they are doing the jobs that Americans aren’t willing to do. “Immigrants make things cheaper for all Americans by doing jobs such as picking fruit, selling the fruit on the streets and cleaning up on construction sites”. (ToddK) Immigrants have made our population growth, it has helped economic growth and it has improved standards of living. Undocumented Immigrants are doing the job for most of Americans. Americans want an easy way to economic growth. For example, when your driving between two lanes you see an undocumented immigrant selling flowers or fruit that is their way to make a living. On the other hand, Americans are the ones that are asking for money in the streets because they are considered “Homeless”. Immigrants aren’t taking jobs away, they are improving their standard of living.

Furthermore, “Immigrants are abusing on massive amounts of welfare”.(ToddK) According to the Article, Immigrants are not allowed to be part of the usage of welfare they can barely get access to Medical treatments. According to statistics since the 1990s, most legal immigrants are barred from any welfare assistance. The only way they are eligible to receive medical is if their children are U.S citizens, but even then its less than two percent of medical assistance that they receive. Most families are not even eligible to receive food stamps, which is something that many Americans use in the U.S. For example, I know some young US citizens that abuse welfare, they quit their job or don’t have one at all and they declare themselves homeless to obtain food stamps/cash aid. They exchange those food stamps for cash, while they have an opportunity to work legally and have a great education. Therefore, it is completely impossible for an undocumented immigrant to “abuse on massive amounts welfare” because most of them are not eligible for financial government assistance.

As a result, with help of the research, I have done I provided evidence and supported my position toward DACA dreamers. I strongly believe they shouldn’t have to lose the opportunity to have a better life. An article by the New American Economy “Dreamer: Given the opportunity, We Work Hard”, Leonel Nieto whom is an undocumented immigrant from Mexico in 2012 he received the legal right to live and work in the United States. He rapidly started making his dreams come true from buying a home, a car and earning his master’s degree. “DACA made a huge difference in my life,” “DACA gave me peace of mind,” “For a least a little while, I felt like I was American. It gave us the opportunity to show others that immigrants are good people and contribute to society.” (Nieto) This article proves he just wanted to live a better life and provide a better future for his family he had no intention of taking anyone’s job away. Now that Trump has announced that DACA will end Nieto like many other recipients of DACA are devastated because once again they are left with nothing. As he states “All we want to do is show our employers and neighbors our potential. We are Americans, and when given the opportunity, we work hard to raise our families and give back to the community.” (Nieto) Bryce Covert, a writer for The New Republic provides statistics on how Immigrants have achieved their goal in the economy. Allowing DACA dreamers to work legally, open up more economic opportunities to everyone, not just themselves. They are the ones that work hard for their financial stability, they have no financial assistance from the government and they are required to pay taxes. On the other hand, US citizens are eligible for many assistance food stamps, unemployment, and disability. They don’t have to work as hard as undocumented immigrants. Immigrants are just trying to be financially stable and without DACA it is impossible.

In conclusion, DACA dreamers have proved that they don’t take anyone’s job nor abuse of welfare assistance. They were brought to the US without knowledge of how life would be here, they are trying to have a great education and a better future. Its given to them for awhile and then its been taken away. It shouldn’t be like that, DACA Dreamers should be given the opportunity every US citizen has because they aren’t hurting anyone while seeking for a better future. 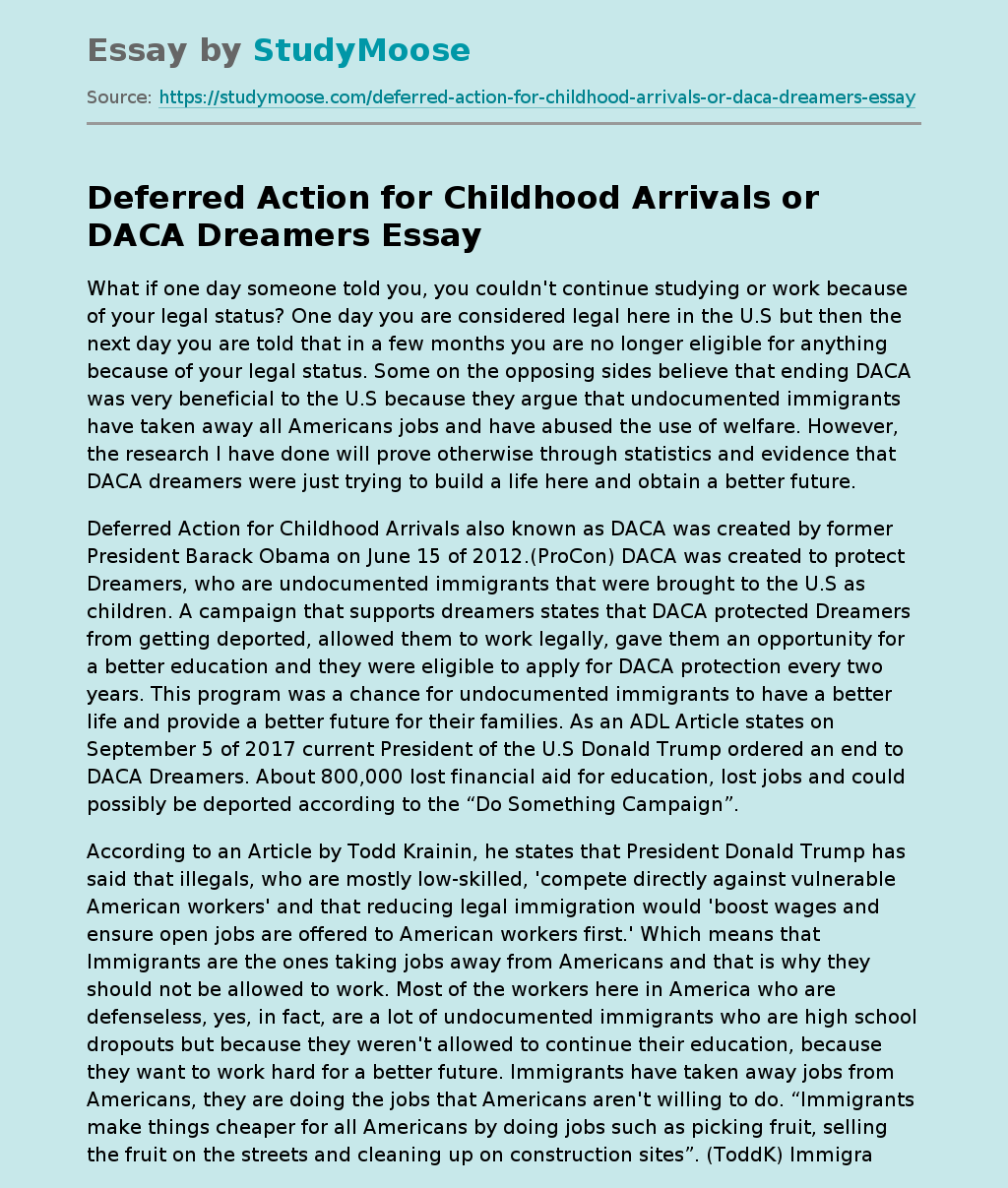