Declaration of Principles and State Policies

The Philippines is not only a republican but also a democratic state. Every individual is a reservoir of sovereignty.
While sovereign powers are delegated to the agencies of the government, sovereignty itself remains with the people, by whom and for whom all government exist and acts.

Don't use plagiarized sources. Get your custom essay on
“ Declaration of Principles and State Policies ”
Get custom paper
NEW! smart matching with writer

Manifestations of a Democratic and Republican Sate:

The observance of election through popular will or the right of suffrage 9. Supremacy of civilian authority over the military

10. Separation of Church and State

What kind of war is renounced by the Philippines?

What is the manifestation that civilian authority is supreme over the military?

The making of the President, a civilian as such, as the commander-in-chief of the Armed Forces of the Philippines Armed Forces – the protector of the people and the State, and the purpose of which is to secure the sovereignty of the state and the integrity of the national territory A simple democratic principle intended to avoid authoritarianism and dictatorship

What is the prime duty of the Government as enunciated in Section 4 of Article II?

Established to protect and to serve the welfare of the people The government has an inherent right to existence and self-preservation, and as such, he may call upon the people to defend the State What blessings of democracy do the Filipinos enjoy?

1. Maintenance of peace and order
2. Protection of life, liberty, and property
3. Promotion of general welfare

What does the principle of separation of Church and State mean?

The State is prohibited from interfering purely ecclesiastical affairs; on the other hand, the Church is banned from meddling in purely secular matters In conformity with the provision in the Bill of Rights that “no law shall be made respecting an establishment of religion or prohibiting the free exercise thereof”

1. The State shall have no official religion.
2. The State cannot set up a church (whether or not supported with public funds), aid one religion, aid all religion, or prefer one religion over another.
3. Every person is free to profess belief or disbelief on any religion.
4. Every religious minister is free to practice his calling.
5. The State cannot punish a person for entertaining or professing religious belief or disbelief.
6. Religious sect cannot be registered as a poltical party [Art. IX-C, Sec. 5 (2)].
7. No sectoral representatives from the religious sector [Art. VI, Sec. 5 (2)].
8. Prohibitation against appropriation for sectarian benefit [Art. VI, Sec. 29 (2)].

Foreign policy – the basic rules underlying the conduct by a state of its affairs with any other State The government should not allow to be dictated by any foreign power in the making of our foreign policy Considerations:

What is the policy of the State pertaining to nuclear weapons?

Republic Act 69696 establishes the Philippines as a Nuclear-Free Zone (Art. II, Sec. 8) Nuclear power or nuclear medicine is not covered with the provisions

What are the underlying premises of Section 9?

The enactment of measure that shall provide adequate social services in the field of housing, education, health, and employment is actually a ministrant [optional] function of the government which, under the 1987 Constitution, is now considered as a mandatory function The society “must ensure that the prosperity and independence of the nation will free the people from poverty” How can social justice be carried out in all phases of national development?

Social justice – giving what is due to an individual such as food, clothing, shelter, and even a little dignity; the promotion of the welfare of all the people; the adoption by the government of measures calculated to ensure economic stability of all component elements of society; the humanization of laws and the equalization of social and economic forces so that justice in its rational and objectively secular conception may at least be approximated (Art. II, Sect. 10)

Up to what extent does the State value the human dignity?

The State values the dignity of every human person and guarantees full respect for human rights (Art. II, Sec. 11)

What is the meaning of family and why is the protection of the State begins from the time of conception?

What is the constitutional duty of the State in promoting the well-being of the youth and women?

Declaration of Principles and State Policies. (2016, Mar 17). Retrieved from https://studymoose.com/declaration-of-principles-and-state-policies-essay 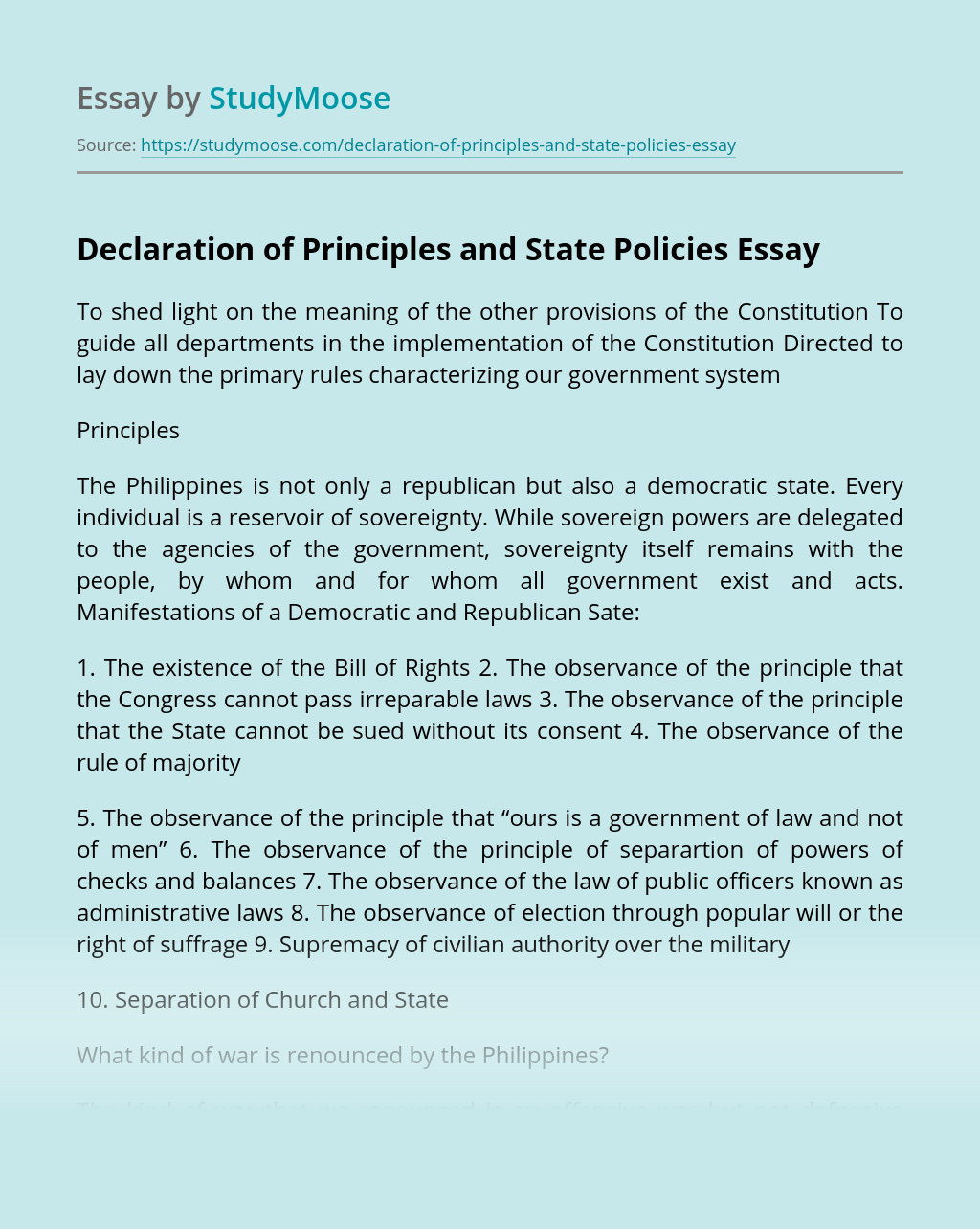