Advertising is considered one of the most important tools of marketing for attracting customers towards the company and increasing the sale of its products and services. Advertising is done in a number of ways, the most effective being the television and print media. Though the main purpose of advertising is to attract customers and increase the profits of a company through increased sales, it has often been regarded as false and misleading.

Don't use plagiarized sources.
Get Your Custom Essay on Deceptive Advertising Just from $13,9/Page

In today’s world a majority of customers are being wary of advertisements since it contains information which is actually false and misleading.

People who most frequently use deceptive advertising are retailers and shopkeepers when they advertise for low-price products available in their shop just to get the customers in the shop but fail to produce them when asked for. There are many forms of advertisement which fall under the category of being deceptive. These include false promises, unsubstantiated claims, incomplete descriptions, false testimonials, partial disclosure or visual distortion of products.

Deceptive advertisement includes all those ads which induce a person to make a purchase on the basis of false claims and promises about the price and quality of competitive products. The Federal Trade Commission is responsible for enacting laws against unfair and misleading advertisements and punishing the companies involved in the offense (Yeshin, 2005). Deceptive advertisement is not a new concept, instead it was practiced since the beginning of time and the trend is increasing in the business society with the passing time.

This has led advertisement to become an ethics issue since it is sometimes being done unintentionally whereas most of the times the intention is to fool the customer in making the purchase through attractive and misleading advertisements. The customers are made to believe that they are getting some great benefits from the product however; this is not so the case after the purchase has been made. Deceptive advertisement is used for targeting customers of all age groups through intelligent marketing tricks and tactics therefore, people need to be aware.

Retailers, airlines, weight loss programs, mobile phone warranties are some of the few companies who use this tactic for gaining sales. Such advertisements are illegal and unlawful in the eyes of law and legal action is taken against such companies even if the ad actually fooled the people or not. The overall impression counts in front of law which if false will create legal problems for the company besides its technical truthfulness (Davis, 1994). Consumers are faced daily with countless ads instigating them to try the product due to which they are unable to differentiate between true and false advertisements.

People ponder why companies need to make use of false and misleading tactics to attract the customers since truth can also get them enough customers to make high profits. Often companies produce products which have a very low quality and are not competitive so they won’t demand high prices. For making their product sale in the market as a competitive one, they mark down its price and use eye-catching advertisements which mislead the consumers in making the purchase. This doesn’t mean that every other new company or others existing in the market adopt this strategy.

Some of the advertisements are based on true and honest information while some others deceive the customers with false information. Educated customers can often see through such false claims but most of them fail to do so and end up wasting their money on deceptive products and services. According to the Federal Trade Commission, the ad must not always entail a purchase for it to be counted as deceptive; just the presence of misleading information or a false claim can demand an action against the company.

These are: • Fraudulent Advertising which is also termed as ‘outright lie’ where the ad states a lie clearly about the product which is disclosed when the customer makes the purchase and does not finds the benefit promised. • False advertising includes ‘a claim-fact discrepancy’ where all the conditions for receiving a promotion or a prize are not disclosed beforehand. • Misleading advertising also called ‘claim-belief interaction’ where an ad can make people believe about a claim which is not want the product provides.

The Better Business Bureau once stated that an advertisement can be misleading when seen complete though every single sentence treated separately might be true. Secondly, the representation, omission or practice is examined from the eyes of a reasonable consumer or a particular target group like the youth or elderly. This means that the misrepresentation, omission or practice in the advertisement has been introduced in order to attract a particular group of customers.

For example, the weight loss programs target the fat people through false and misleading claims of reducing weight in 15 days etc. Thirdly, the representation, omission or practice must be analyzed from the perspective of being a material one. This means that the misrepresentation is a material one if it influences the consumer decision of buying the product or not. The consumer must have decided for something different if he would have not come across the deceptive advertisement (Richards, 1990).

Furthermore, internet also falls under the category of deceptive advertisement since most of the websites often collect the personal information of the user without his or her consent. Deception through internet is mostly related to the privacy issues. Some examples of companies who have been cited for deceptive advertising include United Weight Control, Nutri-System, Inc. , The Diet Center, Physician Weight Loss Clinic, Weight Watchers International, Inc. , and Jenny Craig. Action was taken against these companies and they were made to modify their advertising and marketing practices.

The liable companies are subject to penalties by the law which may be stopping the ad immediately, paying for damages to the customers, correcting the ad or even requiring the company to leave the industry or banning it for a certain time period in extreme cases of deception. Besides Federal Trade Commission, Better Business Bureau and National Advertising Review Council has been also given the responsibility of monitoring the truth in advertisements.

A question that comes to our mind is that is there anything which helps in identifying boundary between truth and deception in advertisements. When we see a number of advertisements daily flashing in front of our eyes, it is very difficult for us to pierce through the flash and identify the element of deception in them. This influences us to buy the product and to ultimately find that the benefit promised is not attained or that we have paid much more than what we got. However, if advertisements are watched carefully then consumers can keep an eye out for deception constantly.

One should know of the many ways in which advertisers can trick the customers in buying the product they want us to buy. Advertisers usually incorporate into their ads the feelings, reactions and responses of customers which they obtained through tests and surveys in creating advertisements. They use these to trick the customers by including in their advertisements those claims which consumers want the most. There are several things which customers can look for while identifying a boundary between truth and deception in advertisements (Stern, 2000).

You may also be interested in the following: frosts simple style is deceptive and a thoughtful reader 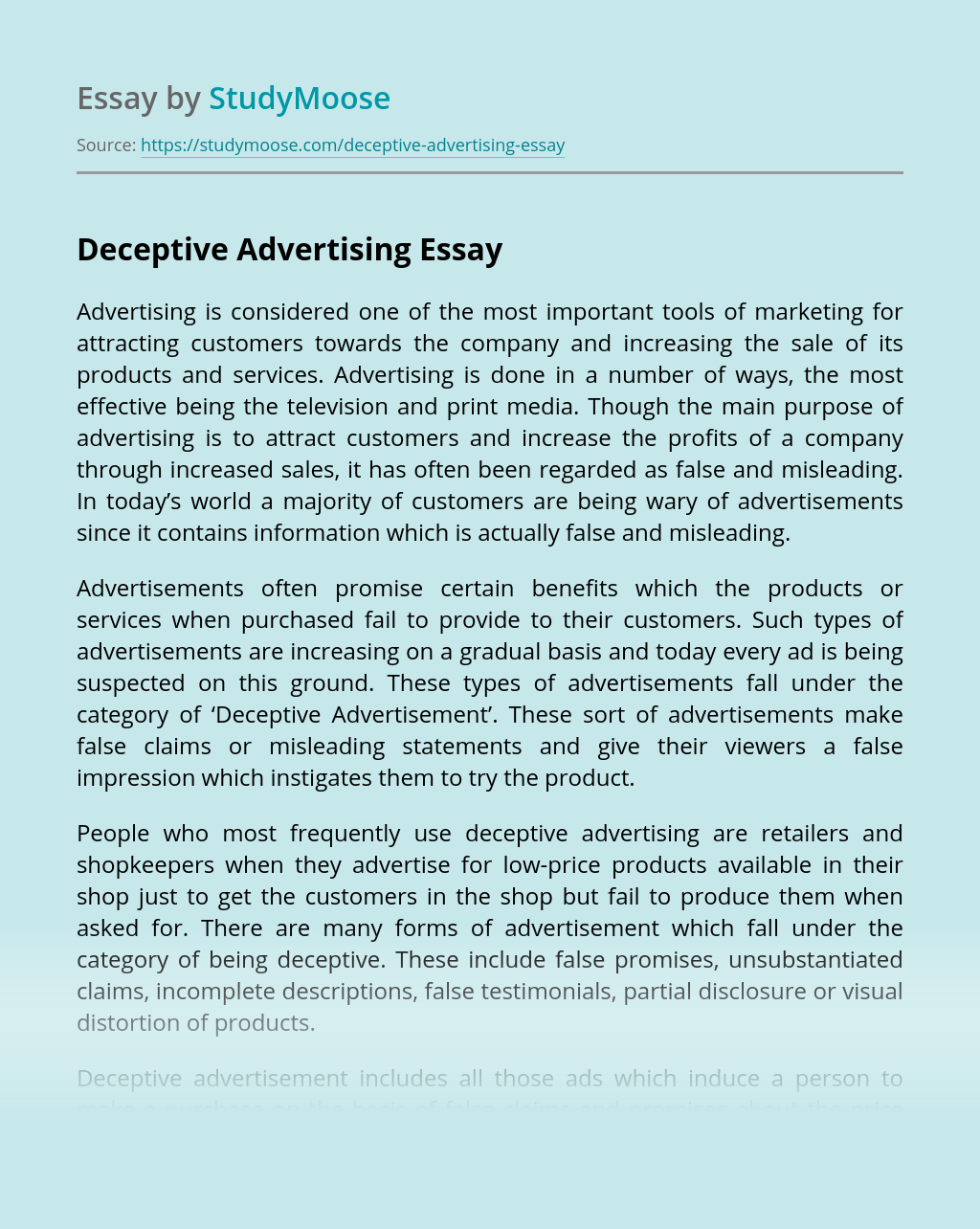 “Shooting Stars” is a horrific and moving poem written by Carol Ann Duffy. She adopts the persona of a female Jew speaking out from beyond the grave about her terrifying ordeal before she died in the Holocaust. A powerful impression is left on the reader after reading Duffy’s dramatic monologue and visual descriptions of her... VIEW ESSAY

1. Bizrate.com (1996) is the US Internet service involving a portfolio of shopping web sites as a price comparison service. It also collects consumers’ feedbacks and reviews of stores and products. Later on, the Red October company also created price comparison toolbar where people can search and compare the products’ prices no matter which website... VIEW ESSAY

Martha Coston was born in Baltimore in the year of 1826. She was left with four children to take care of after the death of her husband. This happened when she was only 21. Even though her husband was now gone she was determined to make money so she could raise her precious children. She... VIEW ESSAY

The downturn has rendered budgets agreed last year largely irrelevant. Analyse Managers in business make decisions that affect profitability of business. For the decision to be effective and successful, it is important for organisation to plan and coordinate the decision. (CIMA official terminology, 2005) defines budget as an expression of a plan that is quantitative... VIEW ESSAY