Appearance vs Reality in The Crucible

Appearance vs. Reality is a prominent theme in The Crucible as some people are carried and blinded by appearance while others actually look at the facts, John Proctor and Elizabeth are not carried away by lies while Abigail and the rest of her friends are ignorant and spread lies. The town of Salem, Massachusetts went through a yearlong period of witch trials. A group of girls led by Abigail the reverend’s niece manipulated the people of Salem to make them believe that witchcraft was happening in Salem.

Turn in your highest-quality paper
Get a qualified writer to help you with
“ Appearance vs Reality in The Crucible ”
Get high-quality paper
NEW! AI matching with writer

It began with Mrs. Puttman wanting Tituba to conjure up spirits of her dead babies, Abigail and her cousin Betty joined in along with other girls. “She always sings her Barbados songs, and we dance.”(Act1 line102)This is when she is trying to explain to her uncle what was actually going on in the woods. They were caught by Parris, Betty became sick and the girls decided that they were going to convince everyone this was witchcraft.

This led to Abigail spreading rumors about people she did not like in the town. “We must tell the truth Abby!”(Act1 line 318) this was Mary Warren trying to convince Abby to tell the truth.

It appeared that Elizabeth was committing witchcraft because of the voodoo doll found in her house when Cheever went to her house to arrest her. “Tis’ hard proof?(To Hale)I find here a poppet Goody Proctor keeps. I have found it, sir.(Act2 lines 812) Marry Warren told her she was mentioned in court but not yet accused and she attempted to clear her name but clearly failed.

She knew that Abigail just wanted to get rid of Elizabeth because she wanted John for herself. “It’s a bitter woman, a lying, cold, sniveling woman”(Act1 line138) Abby was bitter that Elizabeth had fired her from the job but it was all Abby’s fault as she was getting to close to John. She needed Elizabeth in jail or killed for that to happen. So Abigail started the rumor that Elizabeth was doing witch craft on her.

“Why Abigail Williams charge her.”(Act2 lines753) and that the voodoo doll was for her, she even went as far as stabbing herself with a needle. “And in the belly of the poppet a needle’s stuck.”(Act2 Lines813) Mrs. Putman is also adding to the fire of the hysteria, she brings up her even dead babies he makes a big deal to reverend Hale “They were murdered, Mr. Parris! And mark this proof! Mark it! Last might my Ruth were ever so close to their little spirits”(Act1 lines232) She wants everyone to believe it wasn’t a coincidence all but one of her babies died. And now Betty is sick and so she is blaming it on an unholy cause. She is representing the appearance of things.

The reality is Ruth is faking being sick and maybe she wasn’t making healthy babies, enough for them to be alive and well. Another example of appearance vs. reality is when john proctor finally gives in and admits he is a witch, he goes to the court. “He’s only playin’ you! He means to hang us all!” (Act3lines 382) He realizes that the truth will set you free he confessed but later took it back because he didn’t want his name soiled in the town “I have given you my soul; leave me my name!” (Act4 lines728) He doesn’t want his children to grow up having a father with a soiled name a blackened name. He prefers to be hung rather than lie to keep his life.

In conclusion Appearance and reality are too different things it is one thing to see something but another to understand it. Appearance is never enough you must know the facts before jumping to conclusions. Most of the town would be better of knowing this lesson before they got carried away with silly stories made up by bored teenagers. They should look at the facts before getting carried away with appearance.

Appearance vs Reality in The Crucible. (2016, Oct 22). Retrieved from https://studymoose.com/appearance-vs-reality-in-the-crucible-essay 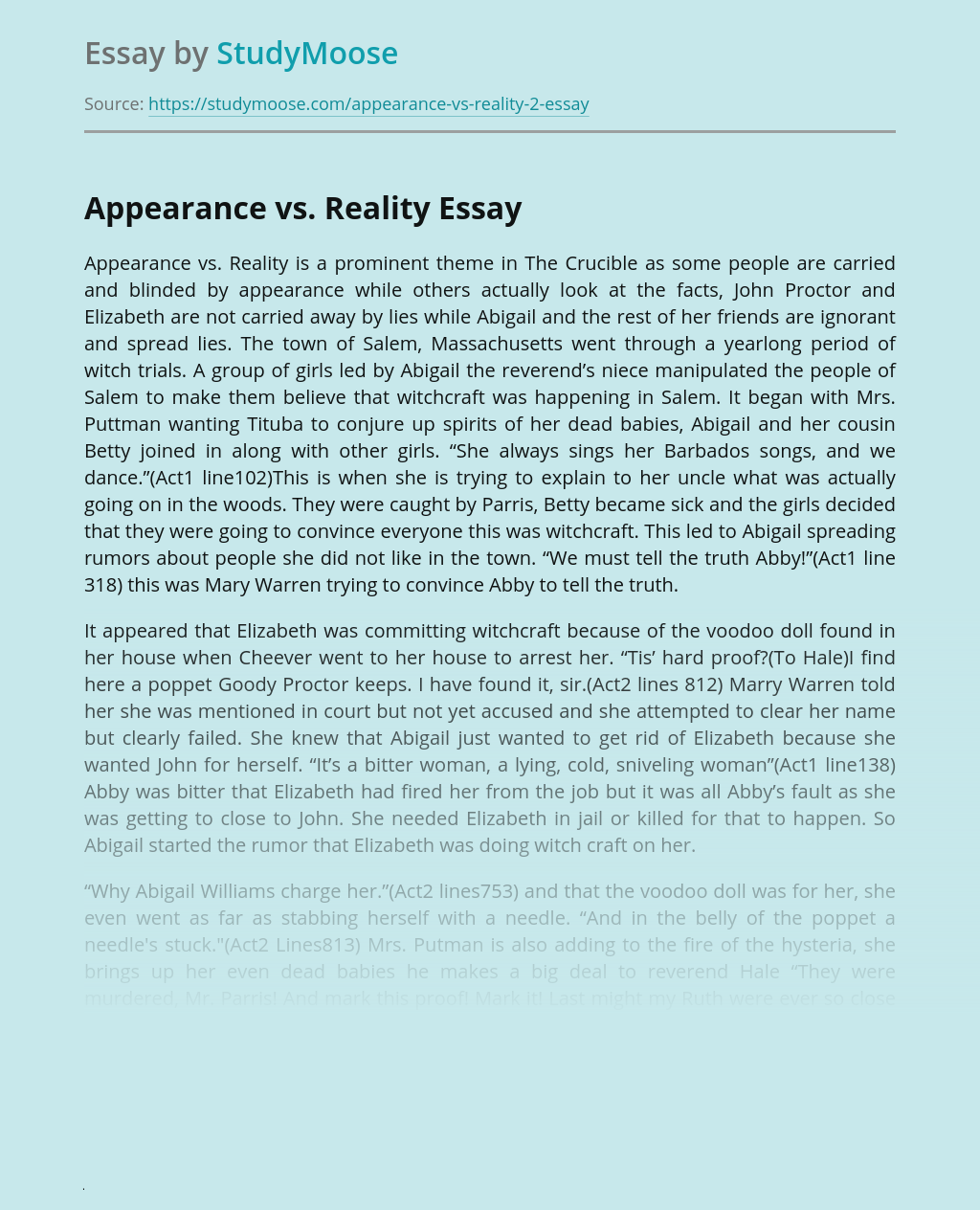 Turn in your highest-quality paper
Get a qualified writer to help you with
“ Appearance vs Reality in The Crucible ”
Get high-quality paper
Helping students since 2015
Stay Safe, Stay Original