During the period of 1850-1861, America was struggling to stay united as debates over several major issues started to take the forefront. After the war with Mexico ended in 1848, America gained the territories of Texas, New Mexico, and California through the Treaty of Guadalupe Hidalgo. Soon after, disputes over whether these states should be free states or slave states erupted. By 1850, a solution was found in the Compromise of 1850 where California would become a free state, and New Mexico and Texas would have popular sovereignty, allowing them to decide for themselves whether they would be slave states or not.

The Fugitive Slave Act was also written in 1850 in an effort to satisfy southern slave owners by requiring northerners to return any runaway slaves back to their owners in the South. The combination of the Compromise of 1850 and The Fugitive Slave Act, along with debates over the Constitution and popular sovereignty, started to impact the unity of the nation and potentially split the North and South even more.

The actions of the government during the period of 1850-1861 contributed to the deteriorating conditions of America, particularly in the Constitution and the Fugitive Slave Act. In 1852, William Lloyd Garrison expressed the idea that the Constitution influenced slavery in America despite the fact that nothing about slavery was directly mentioned. He feels that a government in support of slavery is corrupt and cannot be trusted and that the people need to overthrow it. The Constitution’s inability to stop slavery leads to division among the people who support slavery and the people who do not.

In this way, the government played a part in the weakening of the Union (Doc. E). The Fugitive Slave Act, a part of the Compromise of 1850, helped intensify tension between the pro-slavery South and anti-slavery North. In Boston, freed slaves had to be warned to avoid any interaction with watchmen and police in Boston, who now had the ability to send them back into slavery.

The Fugitive Slave Act further divided the North and South because it forced the anti-slavery North to go against its beliefs and involve itself in the institution of slavery instead of preventing it (Doc. C). Ralph Waldo Emerson further describes the immortality of the Fugitive Slave Act by comparing the government’s varying disciplines on the institution. In 1807, Congress had banned the importation of slaves into America, but by 1850, they encouraged the capturing of freed slaves in the North and sending them back into servitude. This contradiction adds to division because it proved to northerners that the government would bend to the South’s desire to keep slavery. Emerson viewed this act as immoral and felt that if the government implemented it, the Union would immediately fall apart. In a way, Emerson’s view was not wrong, as the Fugitive Slave Act did contribute to increasing division between the North and South over slavery (Doc. D).

Another issue that led to the crumbling of the Union was the debate over popular sovereignty. Popular sovereignty embodied the idea that the new states coming into the Union should be allowed to decide for themselves whether they would allow slavery or not. This belief is rooted in the Compromise of 1850, which was basically an effort to maintain the balance between the slave states in the South and the free states in the North. A map depicting the Compromise of 1850 shows the slave states in the South, the free states in the North, and the new territories that could be swayed either way. The reason the possibility of popular sovereignty in these territories caused controversy was because whatever way they went, they could potentially upset the balance between the North and South, which could lead to serious conflict over slavery (Doc. A).

President Jefferson Davis further explains the debate over popular sovereignty in terms of the Constitution. Although the Constitution does address state power through amendments, it was unable to prevent opinions regarding a lack of state sovereignty from developing in the North. This proves that the Constitution was becoming weak and unable to meet the conditions of that time period. Also, the states are beginning to feel entitled to their rights and are forgetting that the Union existed based on a combination of the states (Doc. H). The Kansas and Nebraska Act of 1854 created the territories of Kansas and Nebraska and gave the settlers of that land the right to decide whether they would be slave states or not.

This act increased tensions around slavery amongst the settlers and thus led to violence because some settlers were advocates of slavery and then others were against slavery. The artist of this cartoon depicted a freesoiler being held down by Presidential nominee James Buchanan and Democratic senator Lewis Cass on the “Democratic Platform,” which was a shot at the Democratic Party because many blamed them for the increase in violence towards anti-slavery settlers in Kansas. The platform is labeled with “Kansas,” “Cuba,” and “Central America,” which represents the alleged Democratic goals of spreading slavery outside of America. The freesoiler is being fed a slave by Democratic senator Stephen A. Douglas and President Franklin Pierce. This cartoon shows that many people felt that the new states were being forced to accept slavery by the Democratic Party (Doc. F).

Sectionalism increased tensions between the North and South and thus contributed to the failure of the Union by splitting the nation apart on several key issues. Sectionalism is when a part of the nation, either the North or South, puts their owns interests over the whole nation’s concerns. Sectionalism can often lead to states breaking apart from the Union. From the period 1850-1861, the North and South were split over slavery and whether the new territories being added to the Union should be slave or free. The only way to prevent conflict over sectional issues is to have a strong Constitution that addresses the needs of each area of the country. Without that, the Union will inevitably fail (Doc. B). President James Buchanan, who felt that in order to preserve the Union, the Constitution must protect the rights of the South, further explains this idea. If the needs of the states are not met, then the states have the right to withdraw from the Union because of their own sovereignty.

To prevent the succession of the South, Congress should recognize slavery, protect the right of slavery in new territories, and support the Fugitive Slave Act (Doc. G). President Abraham Lincoln felt that sectionalism and succession would lead to the demise of the Union. To even consider leaving the Union, a state has to feel that it is better than all the others and will be more successful on its own. However, no state in America had ever been on its own, leading President Lincoln to believe that no state can truly fend for itself (Doc. I). Because it was believed that succession would lead to the failure of the Union, sectionalism was discouraged because it would split the country apart. In reality, sectionalism occurred anyway and resulted in the North and South being divided based on slavery. 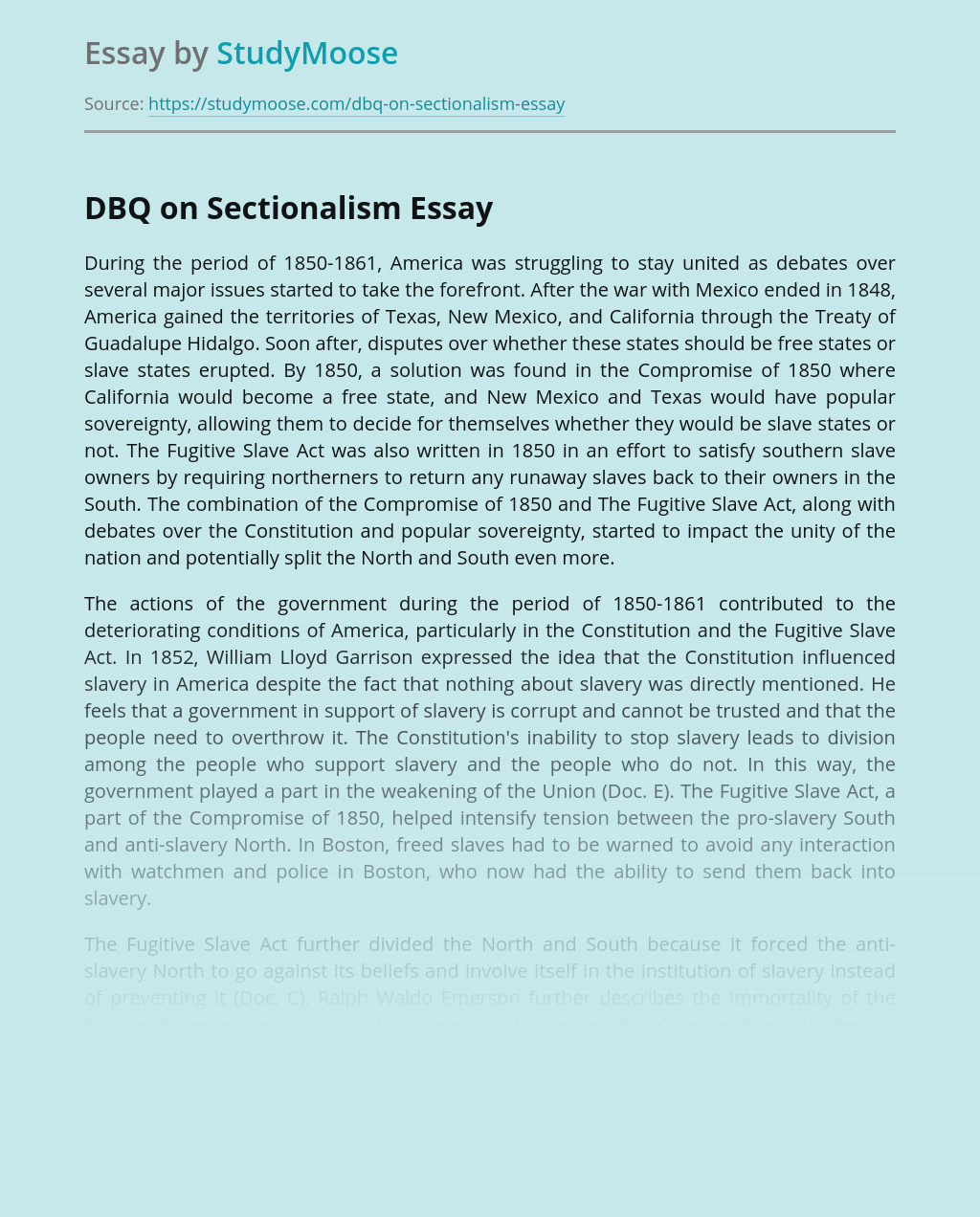