Over the course of history, immigration has played a critical role in American politics and society. Commonly referred as a nation of immigrants, the United States remains a center of social and economic opportunity that has attracted foreigners across the globe. With such a large desire of people to immigrate to the United States, laws have been passed to regulate this influx. Earlier this decade, a prominent example of immigration’s political role was the implementation of Deferred Action for Childhood Arrivals (DACA) in 2012 by the United States Department of Homeland Security.

Don't use plagiarized sources. Get your custom essay on
“ Daca and Dream Act: Implementation of Deferred Action for Childhood Arrivals ”
Get custom paper
NEW! smart matching with writer

Under President Barack Obama, DACA was initiated as a means of deferring the action of deportation on illegal individuals brought here as children that actively contribute to society in hopes of earning their citizenship.

DACA arose from the Development, Relief, and Education for Alien Minors (DREAM) Act of 2010, a bill passed by the House of Representatives which would have provided legal status to undocumented migrants brought to the United States as minors.

Proficient in: Immigration In The Us

Under the DREAM Act, illegal immigrants would be able to work, attend a public school, and register for citizenship. However, widespread opposition from the Republican-majority Senate, most of whom prioritized secure borders over a simplified pathway to citizenship, perceived DREAM as an amnesty bill, building an obstacle between the bill and its success. After approximately two years of failure to reach the sixty votes that would bring cloture to the filibusters regarding the DREAM Act, in addition to the lack of bipartisanship in immigration reform, President Barack Obama sought to enact the bill through a presidential directive rather than congressional law, resulting in what is currently known as DACA.

It is very interesting to note how President Barack Obama and the executive branch of the United States government played such a critical role in the implementation of DACA by the United States Department of Homeland Security. President Obama himself defined his own motives in a press release he gave proclaiming, “Now, let’s be clear — this is not amnesty, this is not immunity. This is not a path to citizenship. It’s not a permanent fix. This is a temporary stopgap measure that lets us focus our resources wisely while giving a degree of relief and hope to talented, driven, patriotic young people.” While President Obama clearly declared his own motives, there is no doubt that there existed other considerations, such as how to carry out such an executive policy change or how it will affect his relations with his constituents that ultimately drove the executive branch toward implementing such a policy.

The notable aspect of the executive branch’s role in DACA’s implementation manifests itself in the form it was given as. Since DACA was unable to pass the Senate, President Barack Obama implemented it as a directive rather than through a formally written and signed executive order. As such, President Obama did not change law, he changed how it was executed without portraying his policy change in the manifestation of an executive order. Despite not having been formally written and signed as an executive order, President Obama was completely fair and just in issuing his directive. It is well known in the Constitution that the executive power is vested in the President of the United States of America. With such a vesting of the executive power, the President is able to fulfil their duties. One duty of the president, significant enough to have been incorporated into the oath of office outlined in the Constitution, is to “faithfully execute the Office of the President of the United States.” By the exact wording of the Constitution, President Obama had the legal authority to enact such a change to government policy pertaining to the execution of the law, even if it was not formally presented as in the form of an executive order.

However, exterior motives present themselves in policies as lurking variables do in scientific research. There were exterior motives lurking behind the scenes in regards to the 2012 decision to enact DACA by the United States Department of Homeland Security under President Obama’s administration. Thomas Dye, in his book Top Down Policymaking, describes agenda-setting as the most important stage in his policymaking process. Dye explicitly states, “conditions in society that are not defined as a problem and for which alternatives are never proposed never became policy issues.” Therefore, it can be asserted that there existed some sort of agenda set by an influential elite that drove the executive government to implement DACA. Thomas Dye himself was well aware, convincing the reader that agenda-setting does not “just happen,” but that agenda-setting tactics are employed by a number of influential elite actors, culminating with the mass media as being the most influential of all.

Unsurprisingly, it turns out the mass media had a huge influence on the administration of President Obama to implement DACA under the United States Department of Homeland Security, though it is much easier to notice this in hindsight rather than in foresight or while it is happening. In research done as a part of The Opportunity Agenda, it is evident that the media began to portray immigration in a much more positive light. Key findings of the research include noticing a media focus on immigration politics, Latino voting patterns, and increased sympathetic coverage of immigrants and their stories. Likewise, the research found there to be less coverage of enforcement issues, less disagreement in regards to immigration policy, and less use of the term “illegal” when describing immigrants.

The changes to the media found in the aforementioned research are critical because it indicates a shift in the mass opinion of the public. As the constitutional republic that the United States presents itself in, principles of democracy uphold the very importance of public opinion. Furthermore, the political actions of the citizens are driven by their opinions. As John Zaller states in his work, The Nature and Origins of Mass Opinion, there exists two notable phenomena with regards to the formation of mass opinion. These phenomena are how citizens get their information and how they form opinions from it. He then suggests that the media makes use of persuasive and cueing messages in order for the media to convince their audience to take a side on a particular political issue.

Ultimately, DACA was seen by many as a victory for civil rights nationwide: it built an easier pathway to citizenship for undocumented immigrants while allowing immigrants to live, work, and learn as any naturalized citizen. Pondered thoughts on being in the shoes of both legal and illegal immigrants, hence acknowledging the complexity and longevity of the American migration process, was why most Hispanic Americans favored DACA and supported President Barack Obama in the 2012 presidential election. A study of exit polls from the Pew Research Center showed that, during the presidential election, seventy-one percent of Hispanic voters favored Barack Obama over Republican candidate Mitt Romney. Since the Hispanics were part of a Latino base which made up ten percent of the electorate, it was easier for Barack Obama to win his second term as the president of the United States through the additional support he received from his views and actions on immigration reform.

On the contrary, DACA’s opposition feared less economic and educational opportunities for native-born citizens. Leniency towards the annual number of the immigrants entering the country meant potential limits in employment. Less jobs would be available, especially minimum wage jobs which is often assumed that most immigrants apply for. Furthermore, applying to college would be more competitive since many educational institutions seek out students of different backgrounds. However, empathy towards those seeking to escape suffering or poverty abroad influenced the moral compasses of most Americans, especially those on the left of the political spectrum. Some believed that the arrival of more immigrants meant a more expansive labor force, thus creating an economy that benefits both unnaturalized immigrants and citizens.

As heated conversations over the correlation of immigration and violence make the stage in current politics, DACA continues to be an important aspect of the immigration debate. In 2017, President Donald Trump claimed that President Obama’s decision to implement the bill through his presidential directive to bypass the Senate was unconstitutional saying, “The legislative branch, not the executive branch, writes these laws.” In addition to President Trump’s disapproval towards DACA, he called for immigration reform that would enforce border laws and deport illegal immigrants. Regardless of his stance, it is possible for the bill to make a comeback, that is, if a new form of DACA is agreed upon by both Republicans and Democrats.

Plenty of actors in the political realm posed an influence on the 2012 DACA implementation by the United States Department of Homeland Security under the administration of President Obama. Such actors included the legislative branch which, through failure in the Senate to reach cloture to vote on the DREAM Act, motivated the executive branch to take direct action to implement the policy of DACA as it is known. Further actors influencing the executive branch include political candidates, organizations, interest groups, but none as prevalent or effective as the media. It is overwhelmingly evident that the media has a huge impact on the mass opinion of the public with regards to immigration.

This change in public opinion not only pushed President Obama and his administration to implement DACA, but it also rewarded him for it helped him overpower his opponent, Republican candidate Mitt Romney, in the 2012 presidential election. The role of the media as a political actor is only becoming more powerful and prevalent as social media continues to expand and reach out to more people, shaping the information they receive, manipulating how they form opinions based on given information, and then encouraging them to go out and vote. While DACA no longer exists today as it was implemented by President Obama in 2012, there is no doubt that the executive branch and the media will remain as two highly influential actors in bringing about future reform to immigration and possibly the reinstatement of DACA as congressional law or even as executive policy once more. 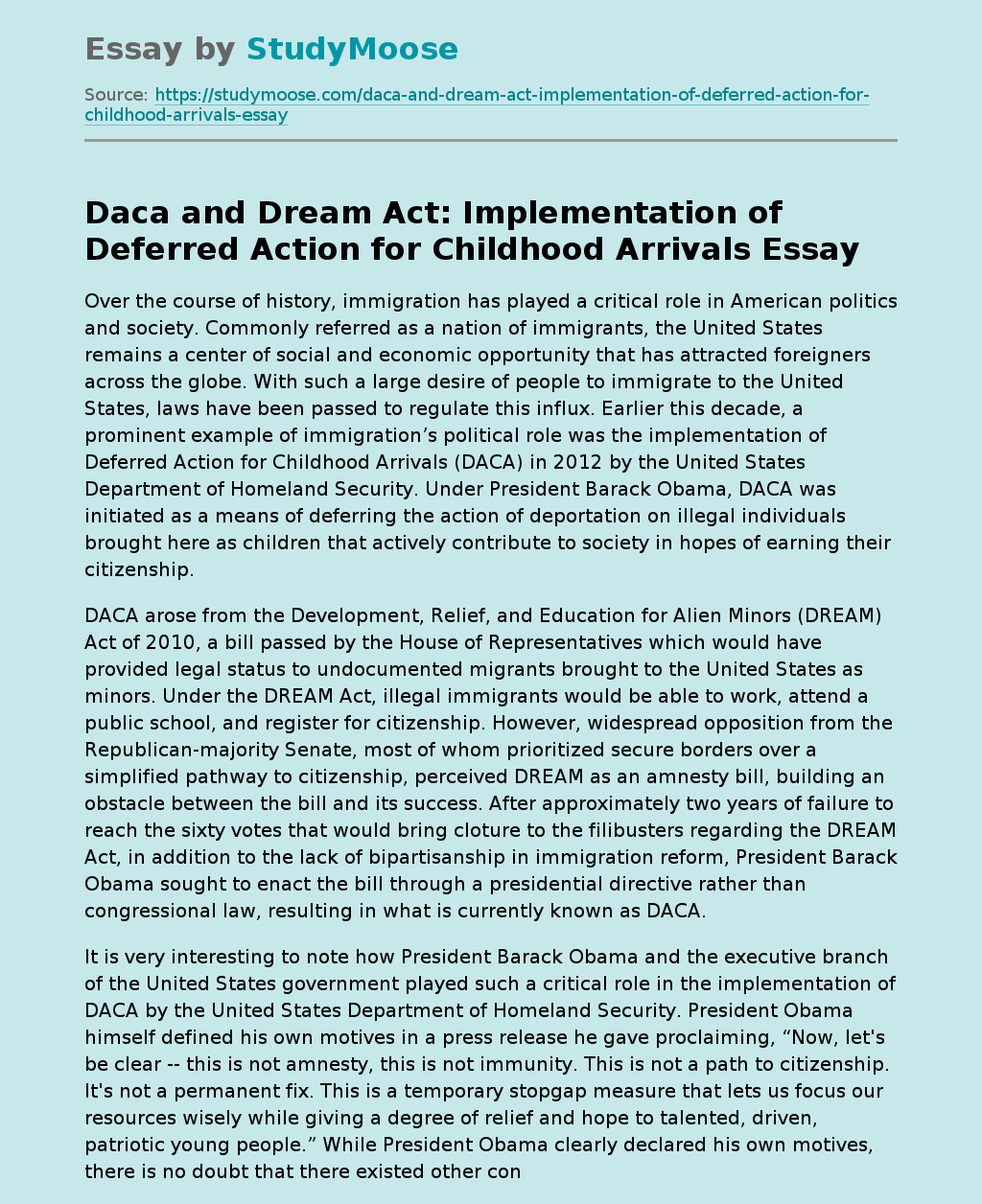