The Crucible takes place in Salem Massachusetts during 1692. It takes place during the tragic time of the so called Salem witch hunts when many innocent people were accused of being a witch or dealing with the devil. As a result of these convictions many people confessed to save their lives, others who would not confess to a lie were hung or executed by other methods such as being pressed. The play the Crucible was wrote by Arthur Miller during the “Red Scare”, which was almost parallel with the Salem witch hunts in that many innocent people were accused of actions of communism and espionage that they did not take part in.

Don't use plagiarized sources. Get your custom essay on
“ Crucible essay ”
Get custom paper
NEW! smart matching with writer

The Crucible is not so much about a witch hunt as it is an illumination of human weakness, hypocrisy, and vindictiveness.

In the Crucible there is quite a bit of human weakness. This can easily be seen through all of the people in the story who admitted to being a witch or dealing with the devil instead of being strong and denying the fact that were not a witch and be put to death.

When this all begins, Abigail, the reverends own niece, blames Tituba, the reverends slave from Barbados of being a witch. When she is accused on page 847 she first denies it, “I don’t compact with no devil,” later on after Mr. Putnam says “this woman must be hanged”, Tituba gives into her natural human weakness and cries out “… I tell him I don’t desire to work for him(the devil) sir.

” That is just one of the many cases where human weakness is illuminated in the play, it is also the most common, many people gave in to the pressure so they wouldn’t be hung.

Another way human weakness was illuminated in the Crucible is that John Proctor will not admit his affair with Abigail because he is afraid he will lose his farm and ruin his name. Mary Warren also gives into human weakness when John Proctor asks her to go to the court and tell that the girls are all faking there so called sickness caused by the accused witches. When she tries to tell Judge Danforth Abigail interferes and Mary pretends to go crazy again. Amongst all the human weakness there was a lot of hypocrisy mostly amongst the people who seemed strong and pure.

The Crucible may take place during the Salem witch trials of 1692, however the illumination of weakness, hypocrisy, and vindictiveness are what the play is actually about. Just like what was going on during the Red Scare during Arthur Miller’s time. 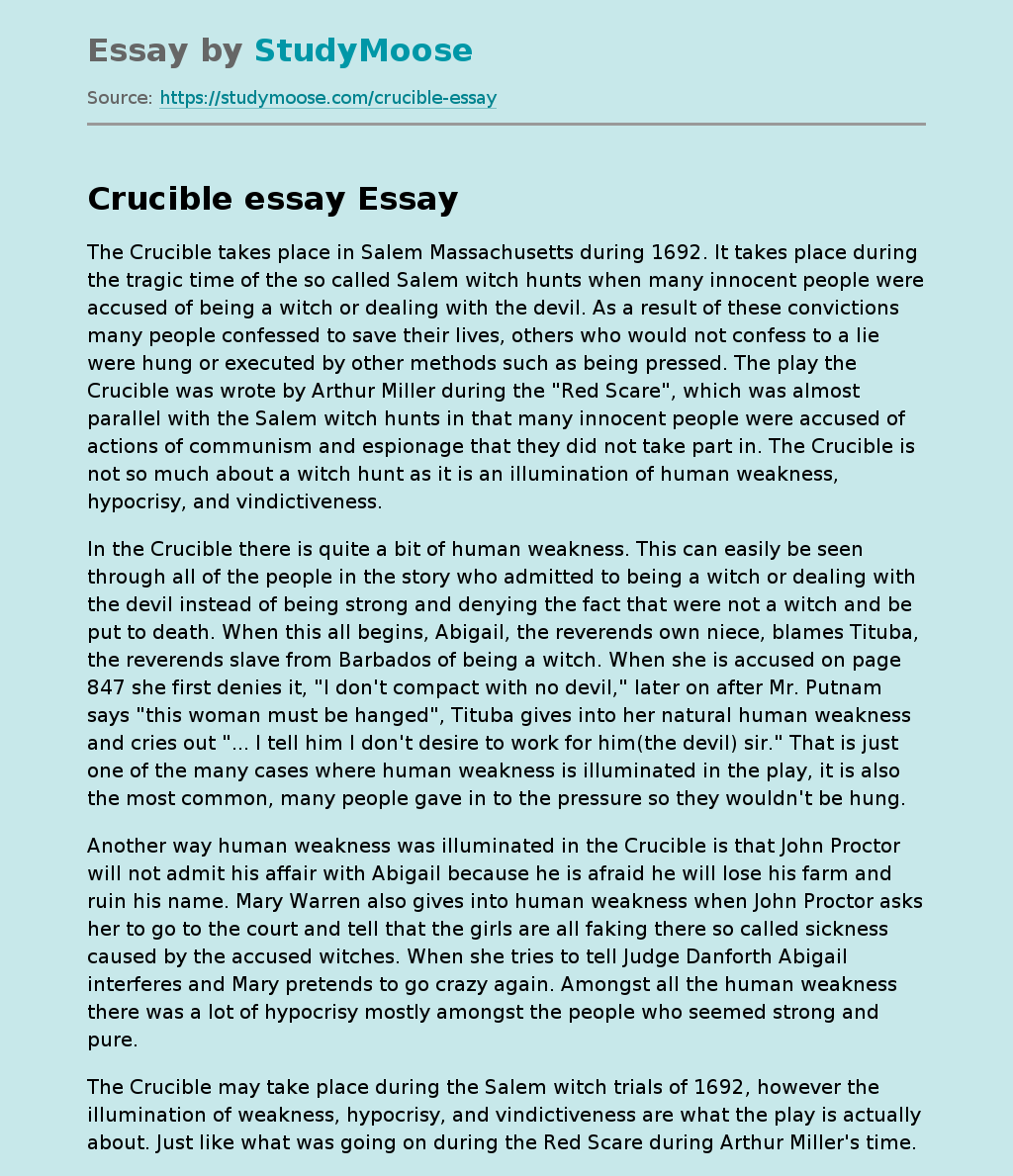