Cromwell and the Queen: Desires of People and Monarchs

In regard to Cromwell and the Queen, two modern films about British royal families from the mid 1600s and the late 1900s respectively, it is clear that the struggles of the British people with their monarchs have been evolving over time. The public does not like it when members of the royal family do things which aggravate the desires and thoughts of the people. In the case of King Charles I from the 1600s, the people did not want him to take tax money from the people to fight wars, when he was uncommitted to making governmental reform.

Don't use plagiarized sources. Get your custom essay on
“ Cromwell and the Queen: Desires of People and Monarchs ”
Get custom paper
NEW! smart matching with writer

In looking to Queen Elizabeth II, the British were against the idea that the divorce of Princess Diana from Price Charles should be held against her in any way. In both situations, the people defend the common man against the insults of over lording ideas which do not match their own concept of principled ethics. In the 1600s, Charles I of England believed he needed money to fight the Scots and the Irish, yet the Parliament did not want to grant him his request unless he agreed to reforms which would lead to a constitutional monarchy.

Since Charles I was a staunch believer in the Divine Right of Kings, he refused the demands of Parliament and attempted to arrest several members. Civil war broke out in England, with both sides assured that they were spiritually and ethically correct. Under Cromwell’s New Model Army, he and Parliament supporters were able to quell the king and his forces.

When the king attempted to garner strength and forces from neighboring countries, Cromwell helped to have the king tried for treason and executed. The series of events ended in a triumph of the demands for national democracy over the desires for dictatorial monarchy.

During modern times, the British royal family experienced the tragic death of Princess Diana in 1997, and Queen Elizabeth II argued that Diana’s death should be treated as a private affair, resisting demands for an official royal burial. Due to Diana’s divorce of her husband, Prince Charles, the Queen insisted that Diana not be treated as royalty any longer, and, subsequently, the Queen experienced a decline in popularity in the eyes of the British people. Most British people sided with the prime minister and Prince Charles, in the sense that a former princess and mother of a future king should be treated with the highest respect.

Although the Queen wanted to make a firm demonstration that divorcing a royal spouse ends with the removal of one’s royal status, the people demanded that Princess Diana’s importance be acknowledged despite the separation from her husband. The people assumed Diana as one of their own, as an equal, while also presenting her as unwaveringly royal. Both movies touch on issues which are close to the heart of all people in democratic times. Many people in the mid 1600s felt as if a king should respond to the demands of the people, and many people in the late 1900s felt as if a queen should heed the commands of the people.

Both issues resonate with the cries of a community who insist on being taken notice of and respected. The people of Britain, during the time of the British Civil War, made the message known that their priorities would not be ignored and that a shift in the monarchy must take hold. They also made the same statement in a different way during the time of Diana’s death, requiring that Diana not be cast down in status, rather be held up as the beautiful and awe inspiring person who she was to many people across the world.

These timely situations which test the relationship between the monarchy and the citizenry both ended with a triumph of the people, and continual march down the road to reducing the exaggerated powers of the upper classes. Sometimes the royal families of the United Kingdom need to be shown that they are not the only royal people residing in Britain. King Charles was effectively shown that his royal aspirations in demanding war tax money from the people did not supersede the interests or importance of the people of his own country.

In an effort to level the playing field, King Charles was effectively usurped and the people were triumphant in their demonstration against elitist greed and self interest. Although the royal family returned to power after Cromwell, the fact that the voice of the people demanded to be heard was a situation never again to be forgotten. Queen Elizabeth was also markedly informed that her royal decision to treat Princess Diana as non royalty did not sit well with the people of Britain.

In demanding that Diana be heralded in the most elaborate of ways, the citizens were saying to the Queen that Diana was just like them, equally important, royalty. By requiring that her death be respected and honored in the highest fashion, the royal family felt the pressure of the people being imposed upon them. The citizens wanted Diana to be treated as royalty, and so, in the end, she was. Even the queen could not resist the wave of passion which swept through the people and buoyed Diana up as one of them, as so very important.

Cromwell and the Queen: Desires of People and Monarchs. (2016, Sep 05). Retrieved from https://studymoose.com/cromwell-and-the-queen-desires-of-people-and-monarchs-essay 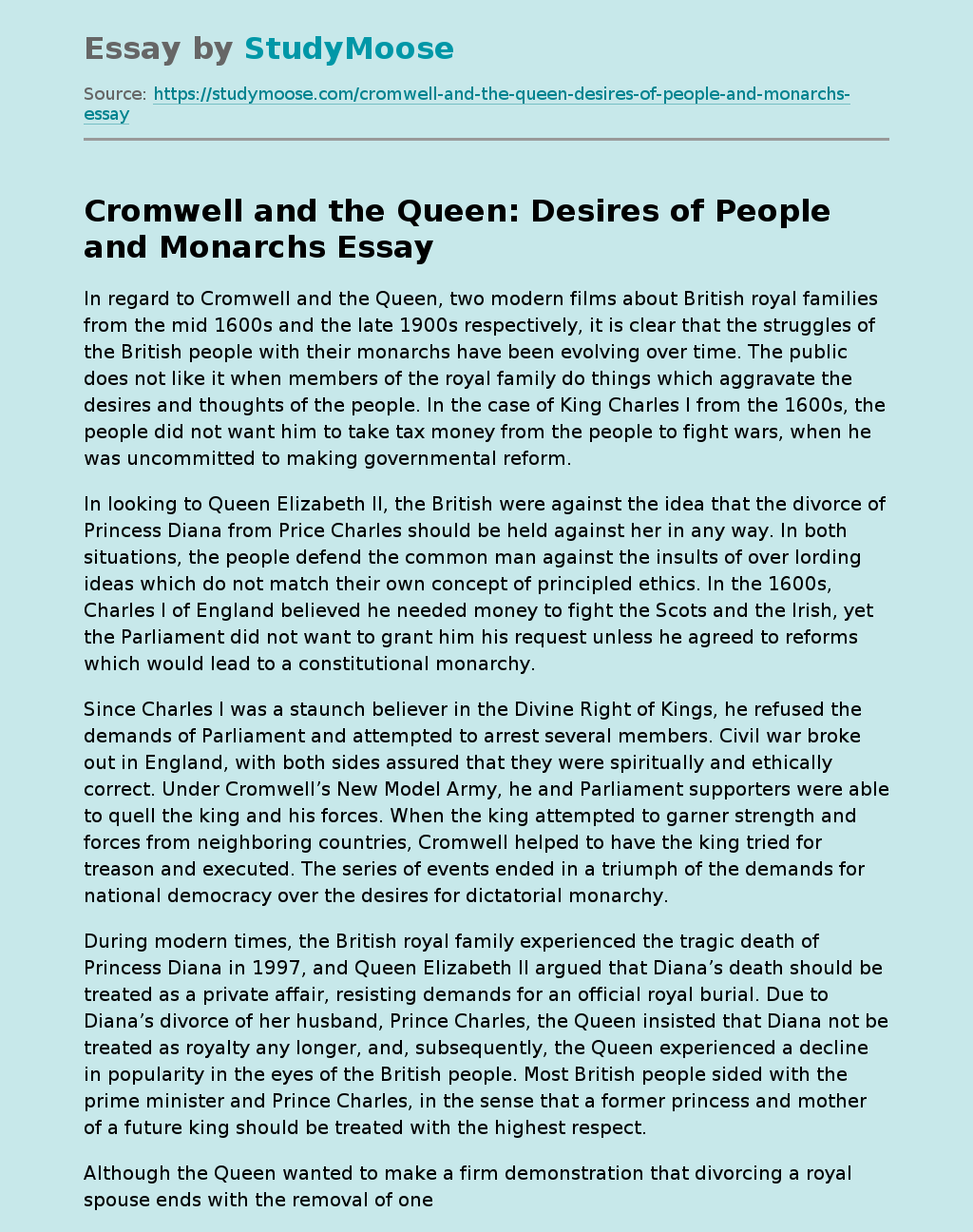