A number of scenes in “Antigone” are equally significant. These include the confrontation between Antigone and Creone, the confrontation between Creon and his son, Haemon, and the death of Haemon, which signifies the fall of Creon. However, there is one scene that cannot be omitted from the play. In fact, it is the scene that everyone awaits, when the king cries in agony for the great tragedy that happens in his kingdom. This is the final scene showing Creon’s soliloquy as he reflects upon his ill-doings and his ill fate.

Don't use plagiarized sources. Get your custom essay on
“ Creon’s Soliloquy: A Cathartic Ending ”
Get custom paper
NEW! smart matching with writer

The scene is very sensitive. Any actor performing it cannot overdo it or underperform because doing so would lead to a different interpretation. Considering that Creon is a king, the actor cannot overdo the performance because it will destroy the characterization that Sophocles established from the very beginning. Therefore, the actor should act it out with much intense demonstrating the depth of Creon’s emotional suffering and at the same time with some poise, somewhat showing the king’s apathetic nature.

Some may argue that the final scene in the play demonstrates nothing but Creon’s remorse over the deaths of his loved ones but reading between the lines will give one the perception relating to his apathy towards his wife and the tragedy that happened. His inquiry about his wife’s death illustrates his apathetic nature. As he questions the messenger, “In what wise was her self-destruction wrought?” he shows an example of a hardened man, who can accept news about the death of his wife.

Similarly, the inquiry he makes could also be due to the confusion he suffers from at the moment. He is taken aback by what happened, thus unable to accept it, he suddenly becomes tongue tied, unable to express his real emotions. This may be the reason why the author chose to end the play in this way, with some degree of silence, unlike other tragic plays or movies where characters scream upon discovering the death of their loved ones.

Aside from the confusion that he experiences, Creon is subdued at the end due to his status in the kingdom. Because of his reputation as a king, he cannot express his agony by screaming or weeping out loud because he is trying to conceal his shame from all who would scorn at him. In his heart, this arrogant king knows that the tragedy in his own house would cause others to ridicule or laugh at him, especially since he once ignores the prophecy of the wise old man Tiresias, who warns him of his fall before it occurs. In this consideration, the scene showing Creon’s soliloquy must be performed exactly with some blend of temperance and agony to show confusion and pride.

Despite the temperance that King Creon shows in his soliloquy, the scene is very important because it signifies Creon’s purgation of remorsefulness and fear. The scene adheres to Aristotle’s requirement for catharsis (as mentioned in Matthews) because it shows that despite the cruel and malevolent behavior of Creon, he is still capable of love, self-reflection, and sorrow. From the beginning till the death of Antigone, Creon is pictured as a fierce and strong’s king, which somehow dehumanizes the character. However, at the end, as he utters his sorrow for the deaths of his son and wife, the audience realizes that behind this man is a heart that can love, a mind that can bend when his loved ones’ welfare is at stake.

Even though the remorse is expressed only at the end, it is very important and cannot be omitted. Without it, people will not be pleased by the ending, because they have to experience catharsis at the end. Catharsis is achieved by the king’s pouring out of emotions, although restrained to the very end. What happens is, as the character feels sorry for his fate, the audience reacts and agrees to his penitence, making them feel the catharsis at the same time.

The cathartic ending will not be complete without the element of music. To make the scene convincing to the audience, it is important to choose a dramatic melody, one that suggests requiem not only for the deaths of the mother and son but also due to the fall of the king and his death-like sadness. Also, the scene will not be complete without dimming lights, which slowly vanishes on the part of Creon as the scene ends. 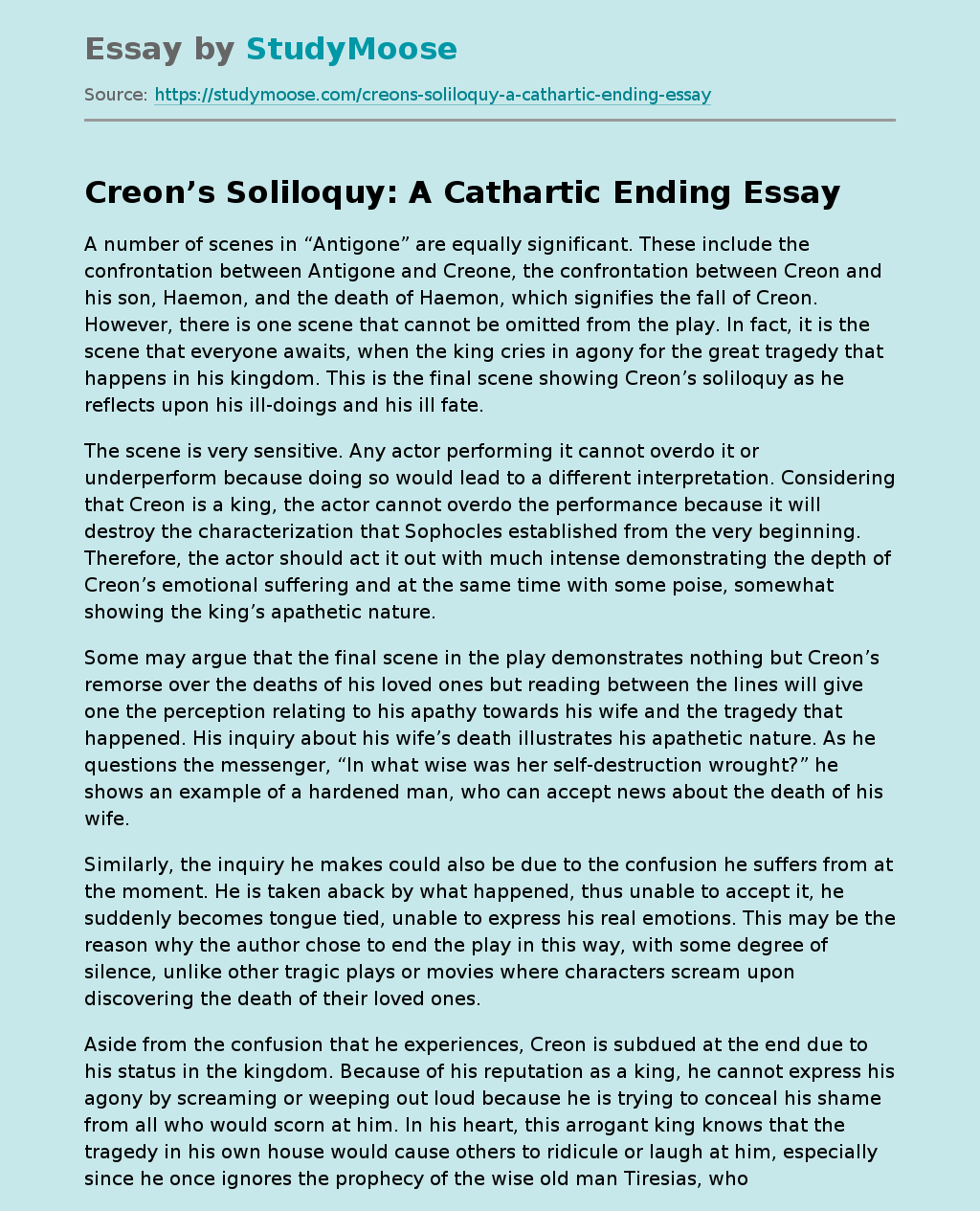