Creativity mainly comes from the person’s faculty.  And every person’s mind is different from each other.

Don't use plagiarized sources.
Get Your Custom Essay on Creativity Reflection Just from $13,9/Page

This signifies that the level creativity varies greatly among individuals. Some people are naturally more creative than others. Currently, a method of measuring creativity is being developed. To know one’s creative level, individuals are subjected to the creativity quotient checking program, which works same the way when a person’s intelligence quotient is measured. A person’s creativity is quantified according to his fluency, originality, elaboration, and flexibility.

Creativity is innate and can be further enhanced by the person’s environment, upbringing, preferences, and experiences.

Everybody is born with different seeds of creativity. Several researches had shown that creativity can be inherited. People, who are inclined to the arts and the music, for instance tend to pass their talents to their children, who more often than not, do excel that field in their own way and capacity (Creativity 2006).

Although creativity is assumed to be hereditary, it is further enhanced by a person’s environment. A person who exists in a place where music is a way of life, there are higher chances that he will grow up with the inherent desire to learn the craft. And that desire, coupled with his parents, as well as other people’s influence, will mold him to do extremely well in it; hence, he will undoubtedly be more creative in it.

Creativity can also be brought about by frustration, as well as emotional tension. The very people that failed one time or another in their personal conquest of love, fame, and fortune, are more likely to adapt creative ways to hoist themselves into the particular stature that they were not able to achieve right on. And for as long as they posses the same amount of desire, they will keep on trying and will keep on looking for other ways to be closer to their goal. By doing that their creativity is enhanced (Creativity 2006).

Criticisms are actually helpful in boosting creativity. In fact, it is helpful in other things and not just creativity alone. The term constructive criticism is very applicable here. Criticisms can further push people to be creative. The act of criticism, either by an expert or a contemporary, is one form of interaction between people. And this interaction will work positively to somebody with an open mind. Criticism dished out to a person who can’t accept it for the purpose of improving his work and his ideas, is useless for he is not capable of improvement. His creativity, as well as his point of view, will remain stagnant and will not thrive. Only a person open to change can accept criticisms. And change is the whole idea of creativity.

In line with this, all criticisms should be delivered in the right way. It should be given out in a positive manner. Criticisms are not meant to put a person down. Excessive criticisms are never helpful to a person, for his creativity or otherwise.

Creativity should be express in all available avenues and places. Children are highly encouraged to express it in schools. Schools are learning institutions, and it would greatly help them in enhancing the creativity they had discovered within themselves. Creativity should be brought forth at an early age. Doing so will give that person a longer time to hone it so as to fruitfully use of it in his chosen career and industry. People with high levels of creativity are seen to be more successful than those who do not possess it much. Students, who perfected their creative instincts while still young, will make them a victory in whatever field they choose.

Creativity is essential in a person’s everyday life. In fact, several bestselling self-help books are focused in enhancing this important trait. And that’s because without creativity, the probability of the things and instances around changing for the better is close to nil. 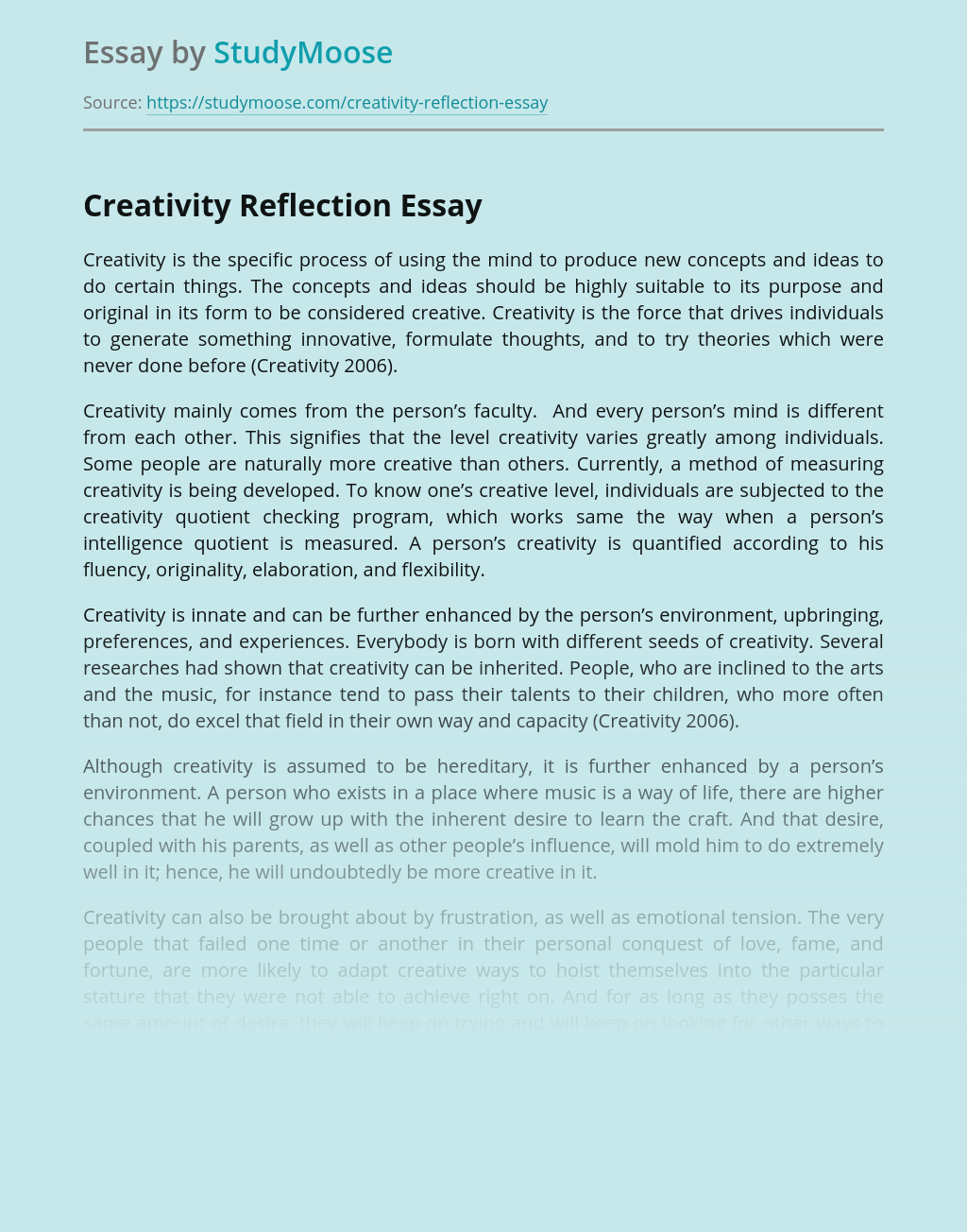 Bruno - "Boy in the Striped Pajamas"

Rate this post TALKATIVE Bruno is represented as talkative in the unique The Boy in the Striped Pajamas due to the fact that when he went exploring he found a boy, called Shmuel on the other side of the fence he was not scared to not just speak to him but, to have a little...

Rate this post Innovation Innovation is a buzz word that many hear, but fewer understand. The success of a culture that embraces innovation is limitless, but how is that done? This essay will define innovation and compare it to the similar concepts of invention and creativity. Related to those concepts is problem solving. Don't use...

Rate this post In this “TED talk” segment by Ken Robinson, an English born professor explains why the educational system in the U.S. is remaining stagnant and unfulfilling to students needs. Robinson begins his arguments by stating, “The educational system of the United States has been accompanied by the same curriculum for the past 125...

Rate this post William J.J. Gordon & George Prince developed the synectics approach to problem solving in 1960. They observed that business meetings had inconsistent results. After hours of studying tapes from meetings, they determined the success factor to be free-form brainstorming. This brainstorming process in an open, non-judgmental climate paired with analogies and metaphors...

Rate this post Abstract School kills creativity – Ken Robinson In his speech at the TED conference in February 2006, Sir Ken Robinson explains his idea that education is an important and essential part of everyone’s life for the progression and prosperity of a better life for the individual and a better world for humankind....