Macbeth is strongly associated in most imaginations with the peculiar and picturesque costume of the Highlanders, as that common to all ancient Scotland. Walter Scott relates with great satisfaction, how with his own hand he plucked the huge bunches of black plumes from the bonnet in which Kemble was just about to appear as Macbeth, and substituted the single broad eagle-quilled feather of the Highland chief, sloping across his brow. Scott is an authority not to be appealed from on any such point; and Macbeth, from his name, was of Celtic race.

Don't use plagiarized sources. Get your custom essay on
“ Costume Design in Macbeth ”
Get custom paper
NEW! smart matching with writer

Yet there may be some exaggeration in the idea of the universal prevalence of the Highland costume in the courts and camps of the ancient Scottish kings. The Lowland Scots were a mixed race, more Teutonic than Gaelic, as is testified by their language in its several dialects, so far back as it can be traced, evidently drawn chiefly from the same sources with the dialects of the north of England; and they must have resembled their Saxon, or Saxo-Danish, neighbours in other habits as well as in language.

The very name as well as the rank of thane, seems to come from the Saxons, and not from the Celts; and the border Scotch thane differed probably but little in appearance from the English chiefs of Northumberland and Cumberland. Still, in the reigns of Duncan and Macbeth, (A. D. 1034 to 1060) there may have been a predominance of the ancient Gaelic costume. Besides, whatever antiquarian industry may determine as to the barren fact, the Highland costume is unquestionably the poetic and romantic attire of old Scotia’s children.

This is thus described by Charles Knight, following and abridging the work of Mr. Skene on the Highlanders: “It would be too much, perhaps, to affirm that the [Scottish] dress as at present worn, in all its minute details, is ancient; but it is very certain that it is compounded of three varieties in the form of dress which were separately worn by the Highlanders of the seventeenth century, and that each of these may be traced back to the remotest antiquity. These are: First, the belted plaid; Second, the short coat or jacket; Third, the truis.

With each of these, or at any rate with the first two, was worn, from the earliest periods to the seventeenth century, the long-sleeved, saffron-stained shirt, of Irish origin, called Leni-croich. Piscotie, in 1573, says ‘they (the Scotch Highlanders) be cloathed with ane mantle, with ane schirt, saffroned after the Irish manner, going barelegged to the knee. ‘ Nicolay d’Arfeville, cosmographer to the King of France, 1583, says, ‘they wear, like the Irish, a large full shirt, coloured with saffron, and over this a garment hanging to the knee, of thick wool, after the manner of a cassock (soutane).

They go with bare heads, and allow their hair to grow very long, and they wear neither stockings nor shoes, except some who have buskins (botines) made in a very old fashion, which come as high as the knees. ‘ Lesley, in 1578, says, ‘all, both nobles and common people, wore mantles of one sort (except that the nobles preferred those of different colours;) these were long and flowing, but capable of being gathered up at pleasure into folds…. They had also shaggy rugs, such as the Irish use at the present day….

The rest of their garments consisted of a short woolen jacket, with the sleeves open below, for the convenience of throwing their darts, and a covering for the thighs of the simplest kind, more for decency than for show or defence against cold. They made also of linen very large shirts, with numerous folds and very large sleeves, which flowed abroad loosely on their knees. These the rich coloured with saffron, and others smeared with some grease to preserve them longer clean among the toils and exercises of a camp.

Here we have the second variety–that of the short woollen jacket with the open sleeves; and this confirms the identity of the ancient Scottish with the ancient Irish dress, as the Irish chieftans who appeared at court in the reign of Elizabeth were clad in these long shirts, short open-sleeved jackets, and long shaggy mantles. The third variety is the truis, or trowse, ‘the breeches and stockings of one piece,’ of the Irish of the time of Giraldus Cambrensis, and the bracch? of the Belgic Gauls and southern Britons in that of C? sar.

The truis has hitherto been traced in Scotland only as far back as the year 1538; and many deny its having formed a portion of the more ancient Scottish dress: but independently that the document of the date above mentioned recognizes it as an established ‘Highland’ garment at that time, thereby giving one a right to infer its having long previously existed, the incontrovertible fact of a similar article of apparel having been worn by all the chiefs of the other tribes of the great Celtic or Gaelic family is sufficient, to give probability to the belief that it was also worn by those of the ancient Scotch Highlanders.

With regards to another hotly disputed point of Scottish costume, the colours of the chequered cloth, commonly called tartan and plaid (neither of which names, however, originally signified its variegated appearance, the former being merely the name of the woolen stuff of which it was made, and the latter that of the garment into which it was shaped), the most general belief is, that the distinction of the clans by a peculiar pattern is of comparatively a recent date; but those who deny ‘a coat of many colours’ to the ancient Scottish Highlander altogether, must as unceremoniously strip the Celtic Briton or Belgic Gaul of his tunic ‘flowered with various colours in divisions,’ in which he has been specifically arrayed by Diodorus Siculus.

The chequered cloth was termed in Celtic, breacan, and the Highlanders, we are informed by Mr. Logan, in his History of the Gael, give it also the poetical appellation of cath-dath, signifying ‘the strife,’ or ‘war of colours. ‘ In Major’s time (1512) the plaids, or cloaks, of the higher classes alone were variegated. The common people appear to have worn them generally of a brown colour, ‘most near,’ says Moniepennie, ‘to the colour of the hadder’ (heather). Martin, in 1716, speaking of the female attire of the Western Isles, says the ancient dress, which [was] yet warn by some of the vulgar, called arisad, is a white plaid, having a few small stripes of black, blue, and red. 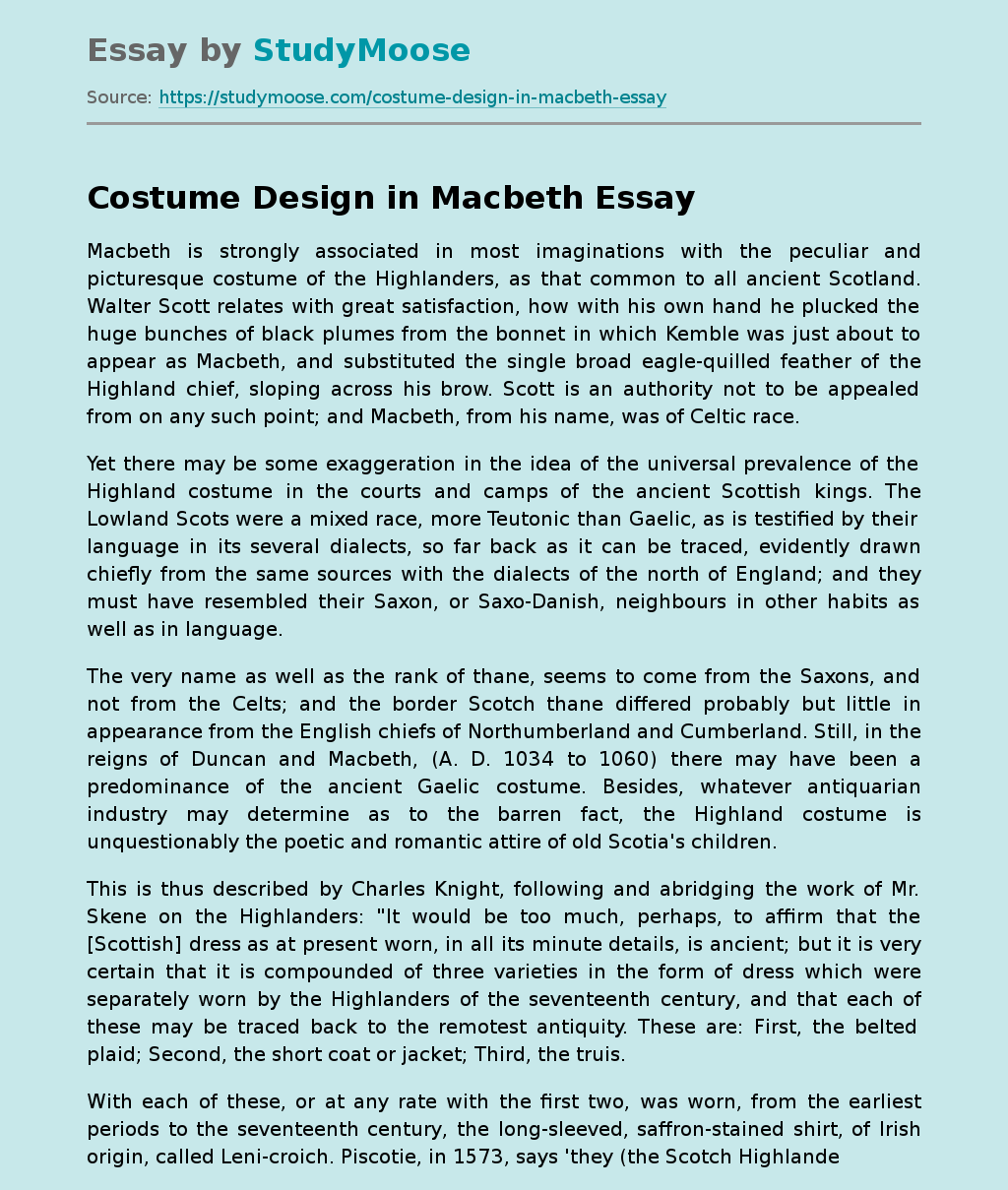