“The Tell-Tale Heart”, is a thrilling short story by Edgar Allan Poe. It is about the narrator’s attempt to convince us that he is not crazy, just have keen senses as we realize when he says: “Why will you say that I am mad? The disease had sharped my senses” (The Tell- Tale Heart, p.

44). He tries to persuade us of his innocence and his sanity telling how he was able to kill an old man, proprietor of the house where he lives, with a good planning and craftiness.

Don't use plagiarized sources. Get your custom essay on
“ Consequences of Phobia in Edgar Allan Poe’s The Tell-Tale Heart ”
Get custom paper
NEW! smart matching with writer

The story shows how the eyes of the old man were like the eyes of a vulture, how it disturbed the narrator, and how it made him paranoid. Every night he enters in the bedroom of the old man in order to get rid of those eyes, however he always keeps himself paralyzed when he realizes that the old man’s eyes are closed. We notice the narrator couldn’t commit such a crime in this situation when he says “I found the eye always closed; and so it was impossible to do the work; for it was not the old man who vexed me, but his Evil Eye” (The Tell- Tale Heart, p. 5).

One night, the old man sat down on the bed and began to call him, but he had no reaction. The sight of the old man’s eyes starts to terrify him. The narrator begins to hear the sound of the old man’s heart accelerated and thinks the neighbors are listening to it too, so he smothers the old man under his bed.

He opens up some planks in the living room floor and buries the old man there. Now everything is clean. However the old man’s scream waked up a neighbor, and three police officers arrived at the house.

Afraid of being arrested, the narrator invites them to come and shows that everything is fine and that the old man wasn’t in town. He offers a drink and the police officers sit in the room, and they keep satisfied with the manners of the narrator: “My manner had convinced them. I was singularly at ease” (The Tell- Tale Heart, p. 47). But the narrator begins to hear the heartbeat of the old man again, so he decides to confess to the police and asks them to take the body away from the house, and so the story ends.

Analyzing the short story “The Tell-Tale Heart”, Lisa Fritscher reaches some conclusions about the narrator, such as he is really paranoid, with the words “He is constantly convinced something about the old man is out to get him – first the eye and then the heart. ” The narrator’s paranoia is first embraced by the obstinacy of the narrator with the eyes and when it ends, he becomes obstinate by the heart beating. There are strong reasons to think the narrator is really paranoid. In addition, Lisa brings a new idea to our eyes, the fact that our narrator has a phobia of the eyes of the old man.

The old man probably has an eye disease called cataract and Lisa goes on to state that the narrator’s phobia would not have been enough reason for murder and adds “Clearly the narrator suffers from deep mental health issues beyond a simple phobia. ” Summing up, we can conclude saying that the Poe’s short story is electrifying and for those who suffer of phobia, it can cause different reactions. With his writing that makes us always on the verge of taking scares, it makes us think of our fears and phobia in a frightening and very exciting way. 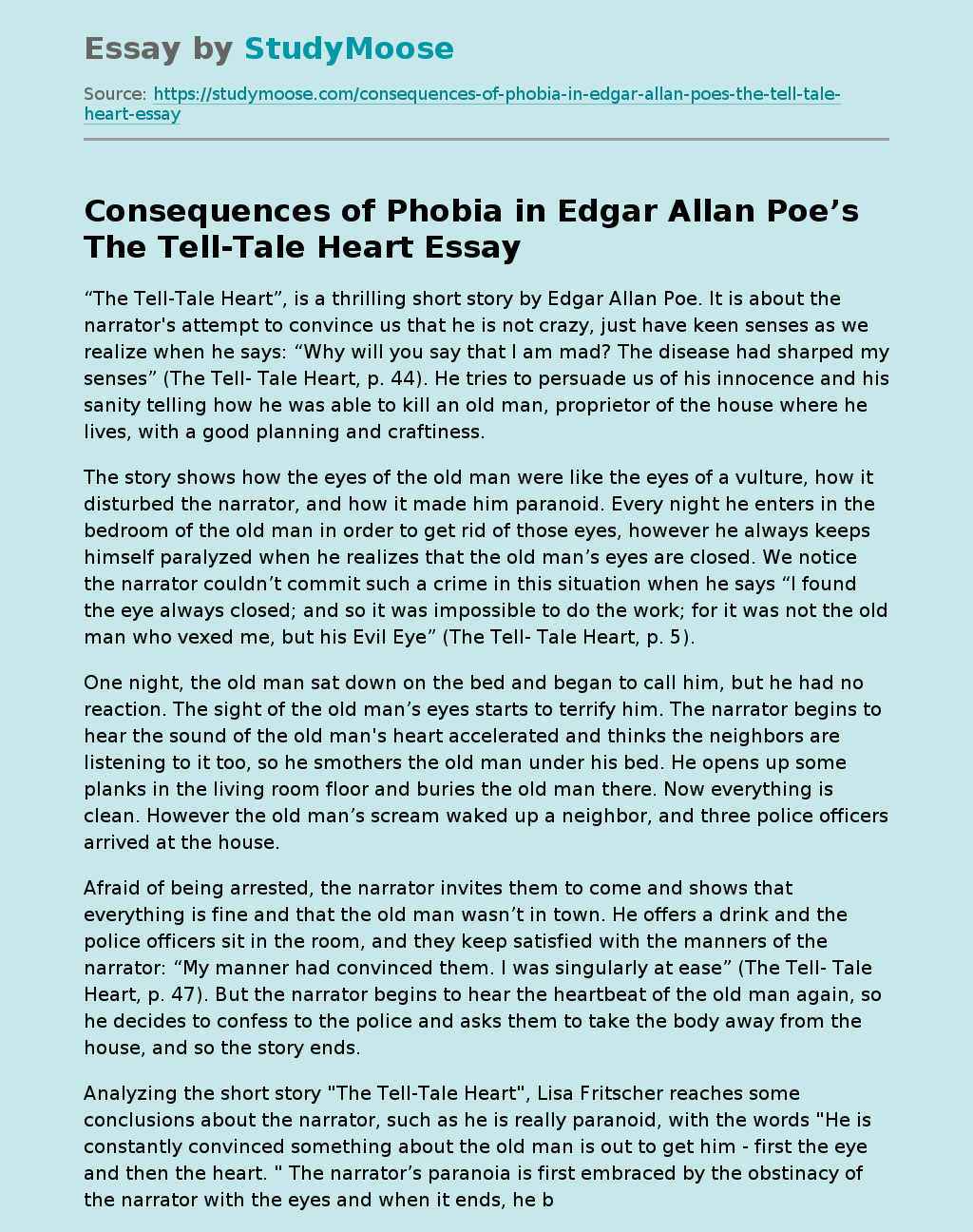