Congo River In Heart of Darkness

The Meaning of the Congo River for Marlow, the journey on the Congo River is one of the most difficult and ominous journeys he will ever take. The fact that it takes him around and not completely into the jungle is significant of Marlow’s psychological journey as well. He never really goes on land but watches the shore from the outside. The only time he goes on shore he finds a wasteland. For Marlow the jungle of the Congo is representative of evil that man is capable of.

Don't use plagiarized sources. Get your custom essay on
“ Congo River In Heart of Darkness ”
Get custom paper
NEW! smart matching with writer

He goes to find Kurtz on his deathbed and is given he choice to take over for him as a god among an African tribe.

Marlow is faced with the ultimate choice between good and evil. For a moment it is uncertain what choice Marlow will make. But, unlike Kurtz, Marlow picks the good over evil, as he rescues Kurtz back to the steamer. The fact that Marlow sailed along the Congo River, around the jungle, and not actually into the jungle is an important symbol also.

Marlow never walks the path that Kurtz did to self-destruction. He went around the jungle to avoid getting captured by evil. Kurtz was a decent Englishman until he gave into the desires of his heart of darkness. Kurtz spent all his time in the jungle and eventually forgot all of his self-control, manners, and upbringing. He truly looked in the deepest part of himself and found that his evil desires would reign. This is symbolic because he was deep inside the jungle. In this respect Conrad uses to men to show the reader both the good and bad of humankind.

He shows the true evil and good that man is capable of If proper restraints had been there would Kurtz have done things differently? The fact that no one was around to keep Kurtz in check helped him succeed in becoming capable of the immense evil he became. Marlow had his shipmates there to keep him responsible. When he left the steamboat there wasn’t anyone to restrain Marlow. He was face to face with himself and his human desires, but as he looked at Kurtz and what the evil had done to him he saw the consequences of choosing evil. If Marlow hadn’t seen the consequences would he have acted differently? In the beginning of the novel, Marlow talks of things as if they are happening far away from him and not actually happening close by which represents that he is on the outside looking in.

He also talks about a fog that settles over the river. This fog represents a distortion of what lies ahead. As he makes his decisions based on what he thinks is right but really he has no idea of what will happen to him or his crew. As the novel progresses the reader will start to understand all of these themes and symbols that the Congo River represents. It represents the shedding of layers of the soul and taking a look into the desires of the heart. By the end it seams as though the reader has taken a look into their own soul to find out what ultimately dominates them. Will they find themselves to be a Marlow; a person who exercises their capacity for good, or will they find themselves to be a Kurtz; a person capable of an immense heart of darkness?

Congo River In Heart of Darkness. (2017, Jan 18). Retrieved from http://studymoose.com/congo-river-in-heart-of-darkness-essay 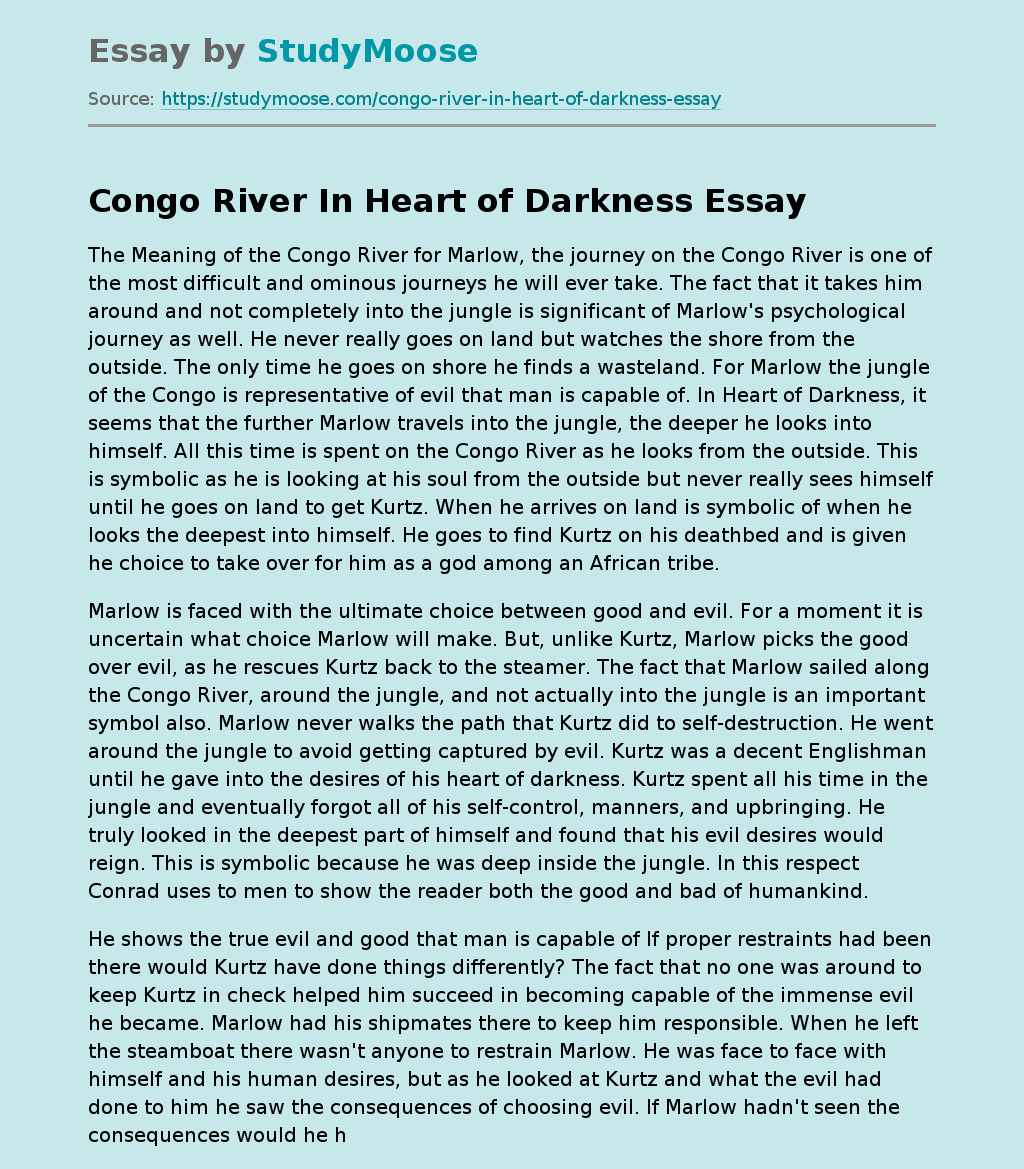