A Journey into the Darkness: Symbolism in “The Fall of the House of Usher”

Throughout Edgar Allan Poe’s life, he wrote many short stories with deeper meanings that could be found through psychology, “The Fall of the House of Usher” being one of them. When looking at a story from a psychological standpoint, the unconscious mind of the author can be interpreted and shown in the stories that the author has written. The psychoanalysis of a story simply builds on this by using Freudian’s theories of psychology. Edgar Allen Poe’s “The Fall of the House of Usher” can be seen through a psychological point of view because of the Freudian theories found throughout the story such as the psycho-sexual analysis of the Usher siblings, and Poe’s ego, id, and superego psyche shown through the characters of the story.

Don't use plagiarized sources. Get your custom essay on
“ A Journey into the Darkness: Symbolism in “The Fall of the House of Usher” ”
Get custom paper
NEW! smart matching with writer

In Poe’s short story, psycho-sexual development plays a very big role in the relationship between the Usher siblings. Roderick Usher’s relationship with his sister is seen as an incest connection which happens to support Freud’s theory of the unconscious mind involving Oedipal dynamics.

Although the Usher family dynamic is not between a mother and child, it is still a family dynamic with psychological issues behind it. In John L. Marsh’s analysis of the psycho-sexual theme, he states, “The idea that “The Fall of the House of Usher” is in part an investigation into sexual motivation and sexual guilt complexes has often been hinted at but never critically pursued as the dominant theme in the tale. But such a reading is at least prepared for in important essays by D.

H. Lawrence and Allen Tate which make the essential recognition that “The Fall of the House of Usher” is a “love” story. Lawrence and Tate, however, mistakenly attempt to purge the love concerned of all physical meaning. What they see Usher wanting is the possession not of Madeline’s body but her very being (Lawrence, p. 86)… In this view, then, the letter from Usher to the narrator takes on a new meaning. The nervous agitation, the acute bodily illness, the oppressive mental disorder which he hints at are no longer ambiguous or unexplainable. They rise from and are the aftermath of a longstanding, deliberately incestuous relationship with his sister, the Lady Madeline, in which she no less than he is a participant.” (Marsh). This is proven in “The Fall of the House of Usher” when we see that Roderick Usher completely tries to control his sister or lover’s life by keeping her in a bed because of her so-called illness. We also see this through his body language and mental disorder.

While reading Poe’s famous short story through a psychoanalytic perspective, it is clear that Edgar’s psychological being was more than likely not stable at the time he wrote the story. After reading the critique “The Fall of the House of Usher” from a Freudian Perspective” by Chloe Borut and with the understanding of Freud’s model of the psyche, it can be interpreted that Edgar Allan Poe’s psyche was split up into different characters. This model of the psyche includes the ID, ego, and superego. The ID psyche is the “completely unconscious part of the psyche that serves as a storehouse of our desires, wishes, and fears. The ID houses the libido, the source of psychosexual energy.” This completely unconscious part of the psyche can be associated with Madeline, who acts out only on emotions and remains the same throughout most of the story. From what we know of Freud’s model, the ID and superego never interact. The superego psyche is “often thought of as one’s ‘conscience’; the superego operates ‘like an internal censor [encouraging] moral judgments in light of social pressures,’ which can be associated with the unnamed Narrator, who connects the outside to the unconscious and is the voice of the society while being judgemental of the Ushers. The last part of the psyche is the ego psyche which is the “mostly to partially conscious part of the psyche that processes experiences and operates as a referee or mediator between the id and superego,” which can be associated to Roderick Usher. From Freud’s model, we know that the ego psyche communicates with the ID and the superego psyche just as Roderick communicates with the narrator and Madeline. We also know that the ego psyche acts as a mediator as does Roderick with his internal issues and the outside world. After this explanation of how Poe’s psyche was divided between the characters of his short story, it is possible to see how “The Fall of the House of Usher” can be seen through a psychological standpoint using Freud’s theories of the unconscious mind.

After reading Poe’s work and after knowing Poe’s life story, it can be construed that the author’s psychological being at the time the story was written was not stable. This story is filled with Poe’s unconscious and conscious mind so much that he probably did not even notice which brings the conversation back to Freud. Freud believed that ‘…the notion that human beings are motivated, even driven, by desires, fears, needs, and conflicts of which they are unaware.” An article about Poe by sciELO states, “Poe suffered from recurrent depression, suggesting a bipolar disorder, as well as alcohol and drug abuse, which in fact led to his death from complications related to alcoholism… Poe tried to understand the human mind in health or disease. By observing and analyzing his own mental activities, by objective scrutiny, and by reading some of the authorities of his time, he added to his knowledge of psychology. … At least three of his stories turn on psychological tricks.” It is proven through “The Fall of the House of Usher” that Freud’s theory that a person’s childhood and unconscious mind affects that person’s behaviour because in the story, we can see similarities between Poe and some of the characters in respect to mental illness and the incestual relationship.

From a psychoanalytic outlook on Edgar Allan Poe’s “The Fall of the House of Usher”, it is very clear that there are multiple deeper meanings behind the story that includes the author’s conscious and unconscious, and the theories of Sigmund Freud. Those deeper meanings prove that the well accredited short story can be seen through a psychological point of view because of those Freudian theories such as the psycho-sexual analysis of the Usher siblings, and Poe’s ego, id, and superego psyche shown through the characters of the story.

A Journey into the Darkness: Symbolism in “The Fall of the House of Usher”. (2020, Nov 26). Retrieved from https://studymoose.com/a-journey-into-the-darkness-symbolism-in-the-fall-of-the-house-of-usher-essay 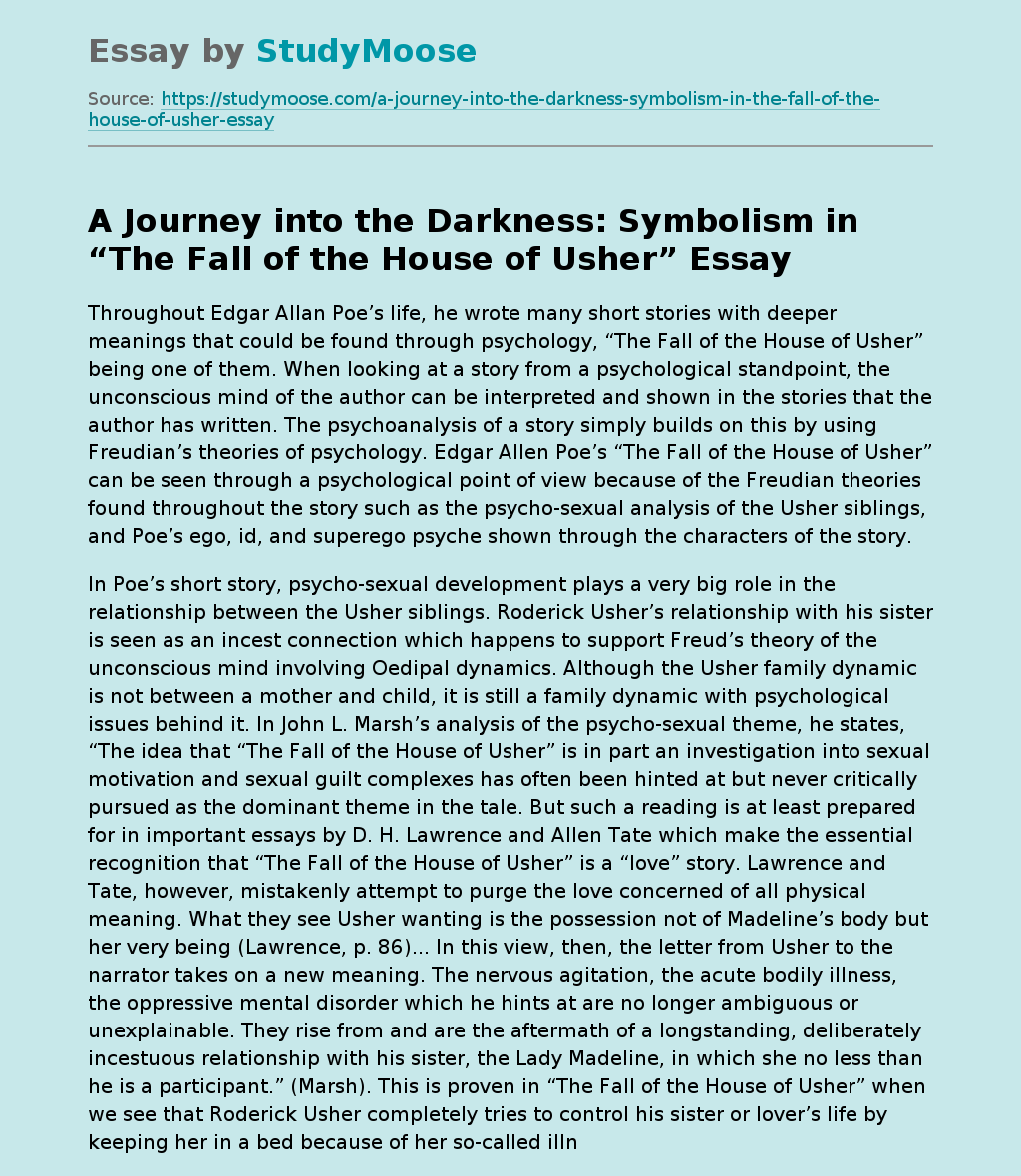