Computer Storage Devices Storage devices are used in order to store various items such as programs, data and instructions. Storage was used as early as 1804 by hole punching paper cards in order to control machinery. Without storage, the computer programs and files that exist now would not be possible. There are many different devices used for storage today such as hard drives, floppy drives and CD-Rom drives.

Hard drives come in all computers and are the main storage device. An average hard drive usually stores from four to fifty gigabytes, but there are hard drives with much greater capacities available.

Turn in your highest-quality paper
Get a qualified writer to help you with
“ Computer Storage Devices ”
Get high-quality paper
NEW! AI matching with writer

A hard drive works by using multiple platters which are made of glass, aluminum or ceramic which has been coated with a magnetic material. The data is recorded by arranging the magnetic particles in order to form bytes on the disk.

Floppy drives are another type of storage unit in which the information is stored on a separate removable disk. There are two different types of floppy drives: a 3.

The third type of storage that I am going to talk about is a CD-Rom (Compact Disk) drive which also uses a removable disk in order to store data.

A CD-Rom works by using a laser lens in order to burn pits into the surface of the CD. The surface of the disk, called land, reflects light back to the lens which is read as 1. The pits in the CD absorb the light and reads to be 0. A CD can store up to 700 megabytes of data.

In addition to a CD-Rom, there is also a DVD (digital video disk) Rom which can store up to seventeen gigabytes of information. A DVD is different from a CD because the disk is denser due to the fact that the pits are packed closer to each other. Also, A DVD uses two layers of pits and can be double sided.

Another method of storage is the Zip drive which uses a 3.5 inch zip disk and was created by Iomega. The disk can hold the equivalent of seventy floppy disks or 250 megabytes. The Jazz drive, which was also made by Iomega, can store up to two gigabytes. The drive with the largest capacity is the Tape drive which can store several terabytes. The only problem with this drive is that the information is only read/wrote in one direction which means that it takes an extensive period of time to retrieve data. Due to this inconvenience, this drive is primarily used for back up purposes.

This paper describes the many different storage units that exist today due to the new advances in technology. There are even more drives that are available which were not listed because they are not as widely used today such as the Orb drive. A few decades ago people would only dream for a device that was capable of storing terabytes of information, but now that dream has become a reality. With the amount of new discoveries that are made every day, the future may possibly bring a device capable of storing exabytes of information. 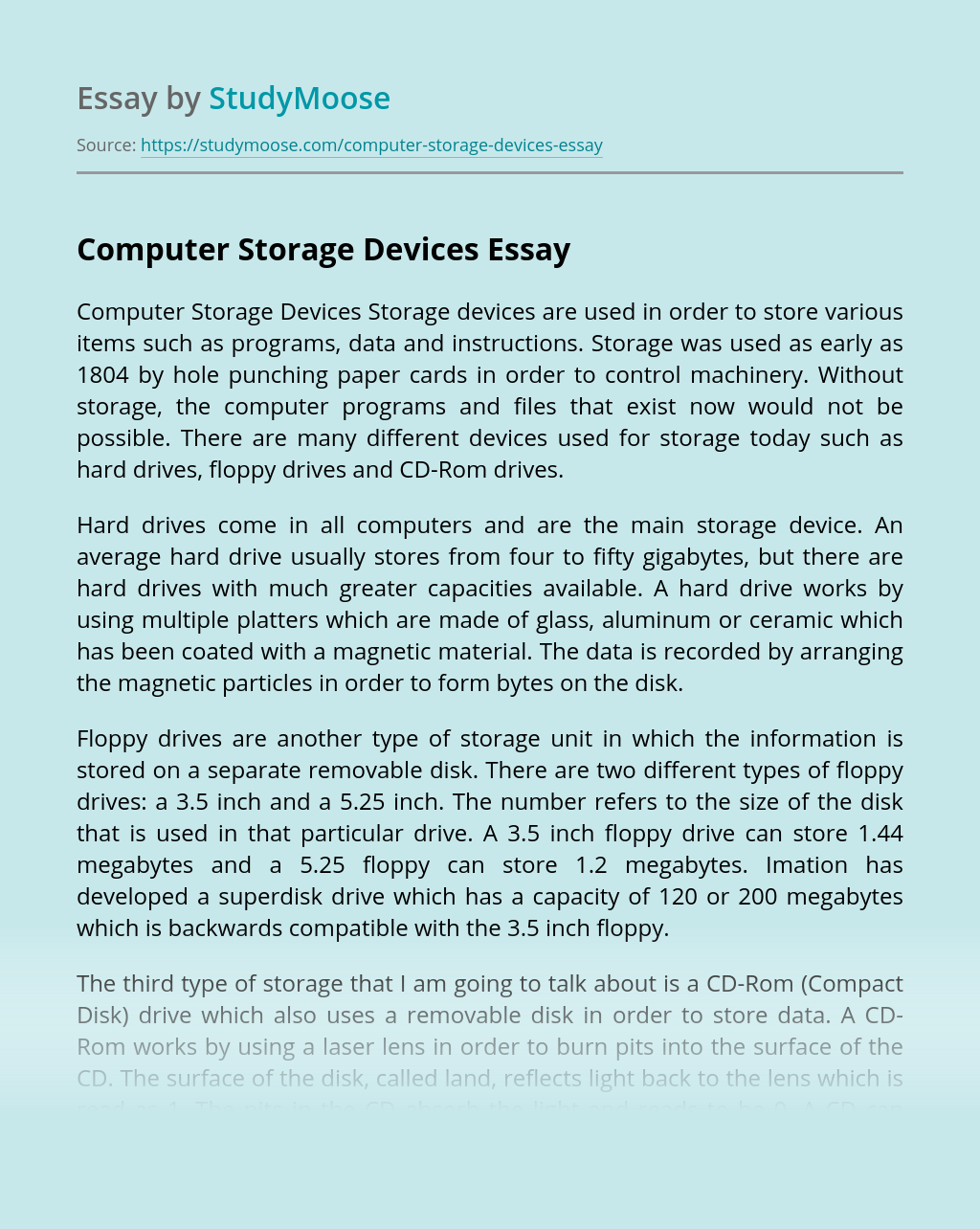 Turn in your highest-quality paper
Get a qualified writer to help you with
“ Computer Storage Devices ”
Get high-quality paper
Helping students since 2015
Stay Safe, Stay Original