This history of computers started long before it emerges in the 20th century. Computer was a man made device that acts as string from mechanical inventions and mathematical theories towards the modern concepts and machines formed a major academic ground and the basis that became a worldwide phenomenon.

It is true that any great invention that is created to solve human lives will always have its negative side that will serve as a prey to embellish and cause catastrophic impact in a perfect device.

Don't use plagiarized sources.
Get Your Custom Essay on Computer Security Risk for Home Users Just from $13,9/Page

As computer became to replace human brains, business partners, our media devices, our financial advisors, connection to the world and computer has also became our number one security threat.

According to the class textbook, “A computer security risk is any event or action that could cause a loss of damage to computer hardware, software, data, information, or processing capability.” (Vermaat, 2010) Some of these security risks have caused users millions of dollars due to identity theft and at the same time computer has helped law enforcement agent captured convicted felons.

Computer Security risk can be classified into two main categories which are computer crimes and cybercrimes. Computer crime involves knowingly interfering with computer security which involves a deliberate act against the law and cyber crime is defined as “Traditionally, crime has been defined as an intentional violation of the legal code that is punishable by the state”. (Vermaat, 2010) Cybercrime has become a serious crime and the FBI as include this into their top three priorities. The perpetrator of cybercrime and computer crimes has fall into seven basic categories which are hacker, cracker, Script Kiddie, corporate spy, unethical employee, cyber extortionist, and cyber terrorist. Home users are mostly exposed to security threats today because they do not have the financial means to protect themselves and also home users think their level of vulnerability is small.

“While the risks to standard home computer users are not as catastrophic in cost as those of small businesses and home office computer users, they are still substantial enough to not ignore. The cost in lost data, missed emails, and possibly the theft of your identity all are significant enough to warrant consideration.” (EITS, 2008) It is better to spend few dollars now to take proactive measures to protect your computer and its information will out weight the time it will take to recover from the losses you likely will suffer without an adequate protection. There are several typical technical issues and risks involving computer networks and computer users. One of which is a commonly used term called computer “virus”.

A computer virus is potentially negative and damaging computer programs that affects or infect a computer negatively by altering the way the computer works without the user’s knowledge or permission. Once the virus infects the computer, it can spread throughout the computer and damage important programs and folders in the operating system. Another computer threat for home users is a “worm”. The book defines a worm as a “program that copies itself repeatedly, for example in memory of on the network, using up resources and possibly shutting down the computer or network”.

The third computer threat for home users is a “Trojan horse” this type of attack is derived and named after the Greek myth and its define as “a program that hides within or look like a legitimate program. A certain condition or action usually triggers the Trojan horse. Unlike a virus or worm, Trojan horse does not replicate itself to other computers.” (Vermaat, 2010) The last known computer or network risk for home users is “rootkit” define as “a program that hides in a computer and allows someone from a remote location to take full control of the computer. Once the rootkit is installed author can execute programs, change setting, monitor activity and access files on the remote computer”. (Vermaat, 2010) How to safeguard against Computer viruses and other Malware:

Home users can take several precautions to help prevent intruders into their personal home computers and mobile devices from malicious infections. These programs can help detect problem that might affect home computers before they occur. Install a quality antivirus application such as, AVG, McAfee, Norton, and Avira antivirus programs are sufficient enough to protect a computer against virus and spyware infections. Some of these antivirus programs are provided for free, however may not be sufficient enough to protect a computer from virus and spyware infections “Pro-grade antivirus programs update more frequently throughout the day thereby providing timely protection against fast-emerging vulnerabilities, protect against a wider range of threats such as rootkits, and enable additional protective features such as custom scans.” Install real-time anti-spyware protection is a way to have a real time program on a computer that will help protect against the skyrocketing number of spyware threats on a timely manner.

Free antivirus program do not provide a real-time protection against Trojan and other spyware and that is why a fully paid antivirus protection is recommended. This fully paid program can detect problems before it occurs. Keeping anti-malware applications current is another way to protect a computer against viruses or malware. “Antivirus and anti-spyware programs require regular signature and database updates. Without these critical updates, anti-malware programs are unable to protect PCs from the latest threats. In early 2009, antivirus provider AVG released statistics revealing that a lot of serious computer threats are secretive and fast-moving. Many of these infections are short-lived, but they’re estimated to infect as many as 100,000 to 300,000 new Web sites a day.

Computer users must keep their antivirus and anti-spyware applications up to date. All Windows users must take measures to prevent license expiration, thereby ensuring that their anti-malware programs stay current and continue providing protection against the most recent threats. Those threats now spread with alarming speed, thanks to the popularity of such social media sites as Twitter, Facebook, and My Space” (Eckel, 2009) Once an antivirus has been installed on a device it is crucial to perform a daily scans. This can be programmed directly by the owner to either perform a scan on a hourly bases, daily or monthly bases. “The sheer number and volume of potential and new threats make it inevitable that particularly inventive infections will outsmart security software. In other cases, users may inadvertently instruct anti-malware software to allow a virus or spyware program to run.” (Eckel, 2009)

Don’t click on email links or attachments it’s a tune most every Windows user has heard repeatedly: If an email link looks fishy, most likely it is, don’t click it. Antivirus software will trigger a warning sign if a link appears to be dangerous to a computer system. Sometimes a “distracted, trustful of friends or colleagues they know, or simply fooled by a crafty email message, many users forget to be wary of links and attachments included within email messages, regardless of the source. Simply clicking on an email link or attachment can, within minutes, corrupt Windows, infect other machines, and destroy critical data. Users should never click on email attachments without at least first scanning them for viruses using a business-class anti-malware application.

As for clicking on links, users should access Web sites by opening a browser and manually navigating to the sites in question.” (Eckel, 2009) The quote that says “protection is better than cure” makes perfect sense even in the computer work. The only way to protect a computer is by playing it safe. Invest a little after a purchase of a PC by buying a powerful antivirus protection to protect the PC from intruders. It is also very important to be very watchful of the type of programs you download or upload into the system. One of the advantages of having that extra protection for a PC is the auto scan option that’s offered by the antivirus program. The software will automatically scan all the files or virus that might cause a negative impact on the computer. 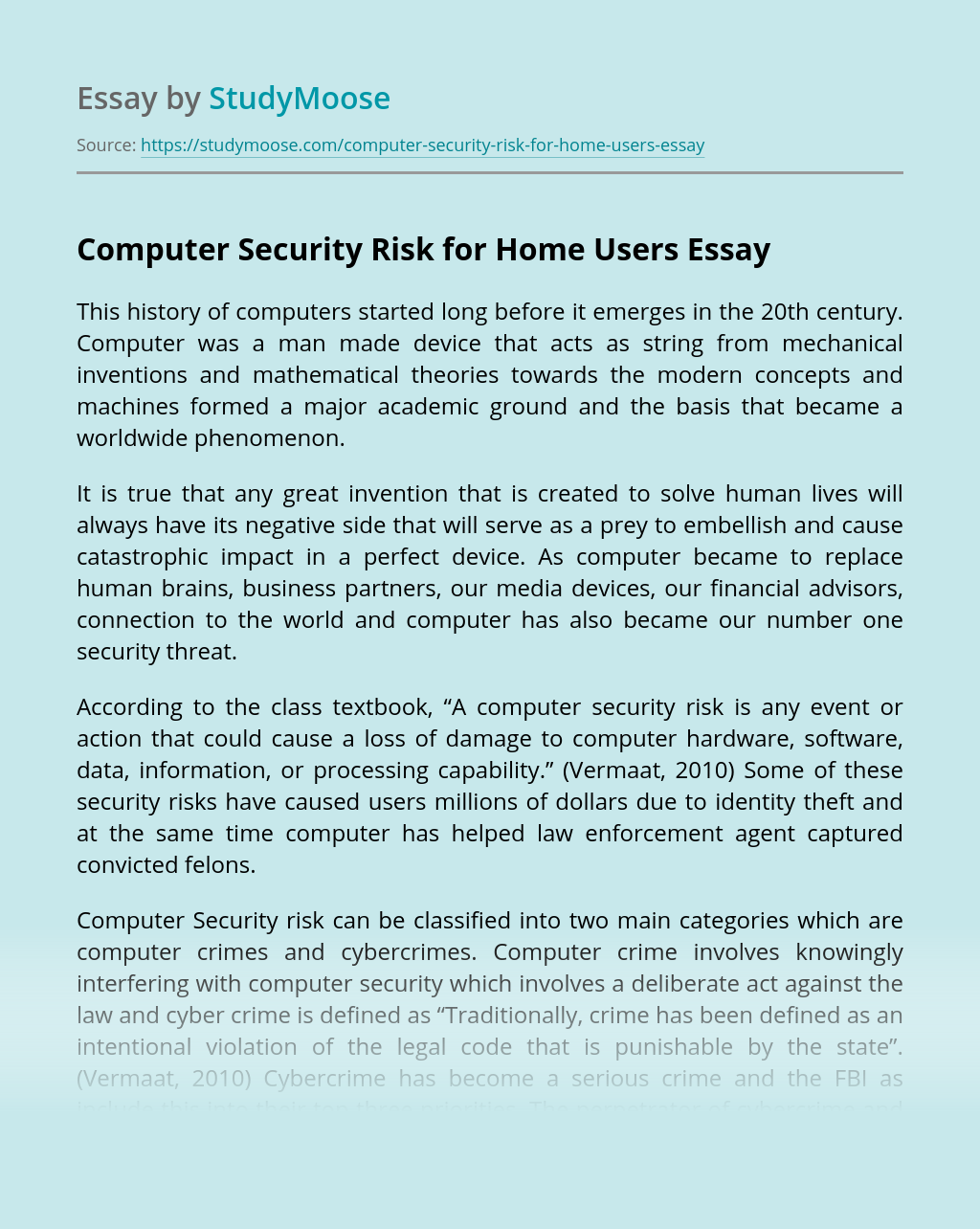 Background of the study (DISCUSSION OF MAIN TOPIC, PROBLEM STATEMENTS AND SPECIFIC TOPIC) VoIP is a revolutionary technology that has the potential to completely rework the world’s phone systems. VoIP is often referred to as IP telephony (IPT) because it uses Internet protocols to make possible enhanced voice communications. Objectives of the study General Objectives:...

Technology is a major problem in society

Get Essay
Impact of computer on society

What is o.s? An operating System (OS) is an intermediary between users and computer hardware. It provides users an environment in which a user can execute programs conveniently and efficiently. In technical terms, it is software which manages hardware. An operating System controls the allocation of resources and services such as memory, processors, devices and...

Objective Function vs Constraints in Mathematics

Linear Programming Model in Operation Research study is usually mathematical type of model which contains set of equations that represent objective function and constraints. The keywords in this article are Objective Function and Constraints, according to Heizer & Render (2008) Objective Function are mathematical expression expressed in linear programming designed to maximizes or minimizes some...