Social work is a field that focuses and concerns individual people and wider society, working with people who are vulnerable and may be struggling in some way to participate fully in society (Warren, 2007). Indeed, a job of a social worker is not as easy as some might perceive it to be. To attain the desirable qualities and attributes of a qualified social worker, one must be knowledgeable, highly skilled and be well trained in the field. Social workers must have the capabilities to work with people and assess their needs and circumstances.

Don't use plagiarized sources. Get your custom essay on
“ Discuss the advantages and disadvantages of involving service users and carers in the education and training of social work students ”
Get custom paper
NEW! smart matching with writer

Certainly, learning from classroom or discussing a theory would not be enough without involving the important element in social work – service user and carers. Beresford (2000) defined service users as people who are eligible to receive social care and social work services. They are considered as people who are currently receiving services and support or have done so in the past. Older people, people with physical disability, mental health services user or even refugees are some examples of the service user.

To define carer is something rather subjective in its own context. A carer is referred to a person who provides care for others on an unpaid basis, from those who are paid (Warren, 2007). The Princess Royal Trust for Carers gave their own definition: A carer is someone, who, without payment, provides help and support to a partner, child, relative, friend or neighbour, who could not manage without their help. This could be due to age, physical or mental illness, addiction or disability.

The involvement of both service users and carers, can certainly provides an essential feedbacks and may persistently gave a huge impact towards the education and training of social worker students, either in a positive or negative ways. Firstly, let’s take a look at the advantages of having the involvement of service users and carers in a lecture room. A social work student should be aware and know that the job as a social worker will allow themselves the opportunity to engage with people from many faces and personalities, background, ethnics and religion.

Thus, sensitivity here plays a vital role. They must be alert that the person, family or society that deals with them may have different ideas, values and opinion. By sharing experiences, giving feedbacks and participating, the social work students will certainly have a good exposure with the service users and carers. Consequently, the exposure will open a new perspective in their life and will benefiting them in the future. This is mainly because social workers do not practice in void.

They work and liaise with various types of organizations, public and private sectors. In addition, ‘each social worker undergoes a thorough process of learning in which he/she develops his/her unique style in forming professional relationships and employing techniques and interventions for the benefit of clients’ (A. Zeira et al. , 2008) Warren (2007) suggested that the key to involvement and participation of service users and carers is to create a range of opportunities.

She emphasizes that service users and carers must have a choice about how and when they become involved, and they can also contribute whatever they feel able to. This leads us to the next advantage of having involvement from service users and carers, which is, for the benefit of themselves. They can promote their ideas, voices out their needs, shares their main concerns and throw out their hopes to the social work students. Definitely, this is a win-win situation.

Not only the students, but the service users and carers as well may share ‘the cream of the cake’. However, Carr (2004) argues that there is a general lack of research into and evaluation of the impact and outcomes of service user participation. But, one thing for sure that the involvement of service users and carers: provides opportunities for learning – ‘participation can increase knowledge and enhance skills, education and employment opportunities’. (Danso et al. 2003, cited in Warren 2007 p26).

Another key advantage of the involvement is the exposure received by students of some under-represented people or group in the society. Often, these kinds of group are minorities and sometimes were the one that hard to be reached. People who are gay or lesbian, gypsy-roma-traveller, asylum seekers, people with positive HIV/Aids and many more are as important as any other people or groups that the social work students might be working with. Rightfully, we do not want social workers who do not understand or even unaware of these sort of groups do exist.

These people or group feels that they are often unheard. Carr (2004) suggests that the findings from a recent series of literature review about user involvement in promoting change and enhancing the quality of services for older people, children and young people, people with learning difficulties, mental health issues and disabled people show that service users who are marginalized from mainstream services are also found to be under – or unrepresented in participation initiatives that are intended to develop those services.

Surely they are few, and to start with is – ‘the human weaknesses’. Basically, not all people from the service users and carers are good orator; excel in communication skill, wise in giving lectures or sharing their ideas and thoughts. Without proper supervision, a number of 40 students in a lecture room may have wasted 2 or 3 hours of their valuable time, listening nothing but complaints of a service user towards the government. Or even a carer who mumbles whenever he or she speaks and ends up with the students could not even comprehend a word he or she says.

Let alone the knows-it-all type. Instead of creating critical thinking atmosphere to the students, this so-called-experienced speaker, give students tips on how to select a supervisor for the dissertation. Or to make things even worse, a person who demoralized the social work students, by repeatedly saying how bored the job was. To ensure that participation is meaningful and not tokenistic, it would be particularly important for service users and carers to be involved at the very beginning of the initiative (Warren, 2007).

We may presumed, there are some groups that have their own hidden agenda and the opportunity to convey the message unconsciously to the students, do exist. Webb (2008) suggests that ‘the rules of the game are such that agencies often adopt a ‘pool of service users’ that are ‘trained’ to work within participatory agendas’. Later, he concludes, that participation becomes unconscious collusion or even pseudo-consensual to produce false agreement.

To conclude, I would rather say that the advantages of involving service users and carers are far more concrete than its disadvantages. Social work practice requires many decision to be made, including the assessments of needs, selecting the settings in which interventions take place and providing people in need with the appropriate resources and interventions (A. Zeira et al. , 2008). Students are therefore required to get to know and master themselves with the people and group that they are going to deal with.

I do believe that in getting knowledge, there are no boundaries should be associated with it. It is entirely up to us to accept the reality of life and tries to make the most out of it. There might be certain assumptions about professional expectations or expert knowledge of the service users and carers, but nevertheless, we must be mindful and ready to challenge these views so that they did not get in the way in shaping the social work students.

Discuss the advantages and disadvantages of involving service users and carers in the education and training of social work students. (2020, Jun 01). Retrieved from https://studymoose.com/discuss-advantages-disadvantages-involving-service-users-carers-education-training-social-work-students-new-essay 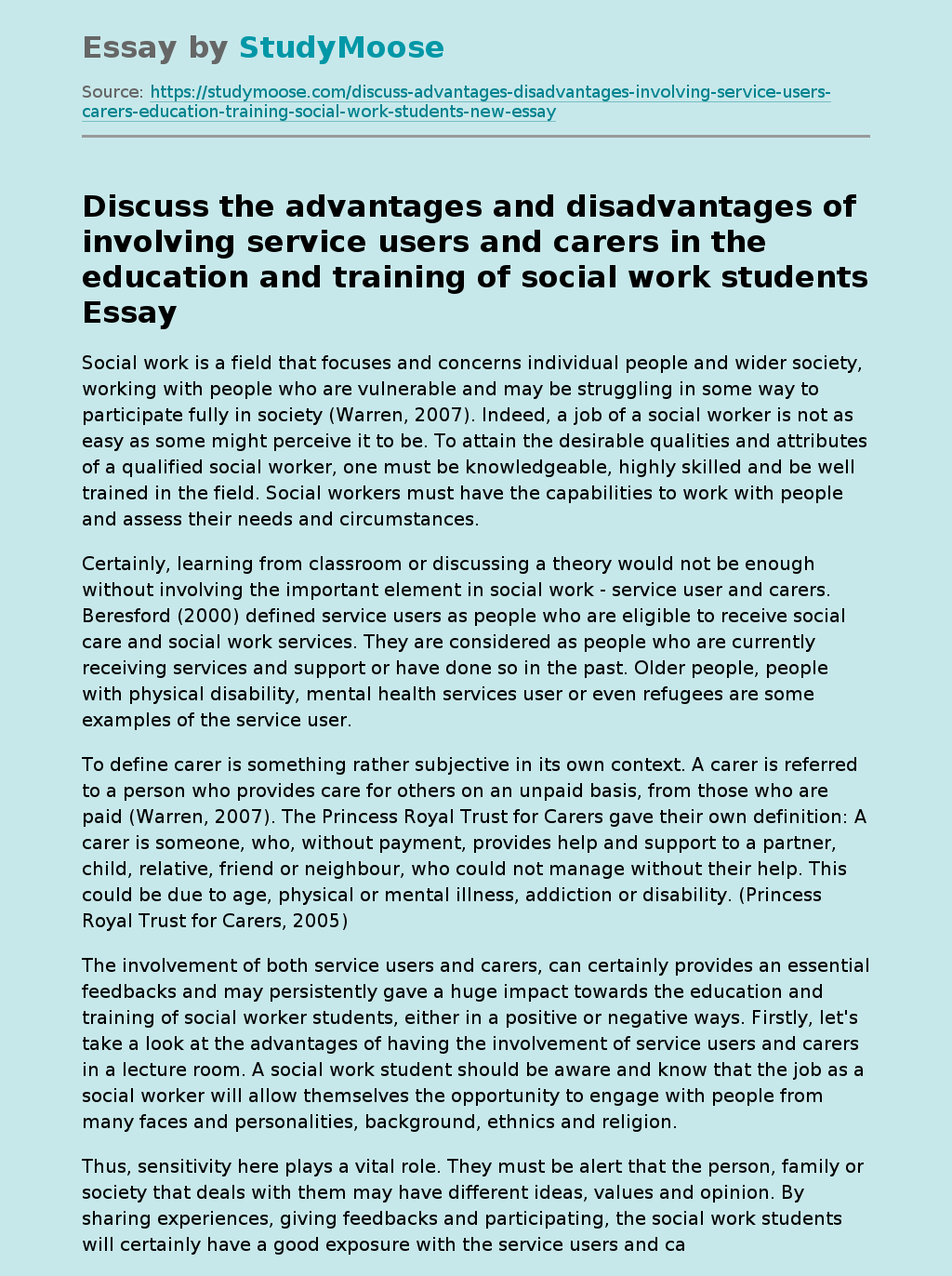