Comparison of "Interpreter of Maladies" and "Underground Railroad"

From the Stories in Interpreter of Maladies and Underground Railroad which I comprehend. In general, the short stories from Interpreter of Maladies focal point is based on communication demonstrating how it can be the key to triumph or failure of relationships. The author Jhumpa Lahiri uses a lot of dramatic irony making the reader understand more than the characters. On the other hand, Colson Whitehead novel The Underground Railroad is horrifying about the struggles of slavery, racism and trying to gain freedom.

Don't use plagiarized sources. Get your custom essay on
“ Comparison of “Interpreter of Maladies” and “Underground Railroad” ”
Get custom paper
NEW! smart matching with writer

Metaphorically, the Underground Railroad is the pathway towards freedom which led a numerous amount slaves to escape brutality and head towards North to be emancipated. The two stories which I found to be attentive is A real Durwan (pages 70-82) written by Jhumpa Lahiri and Ajarry (pages 3-8) written by Colson Whitehead. Both of these stories have a lot of similarities in terms of a firm background between the characters facing hardship in society, sorrow and depressing tone, disconnection from their families and cultural differences.

The comparison of these two stories which I selected opens up with a significant setting and society giving the reader a mental state back in time of slavery and how it works for black Americans (Underground Railroad). In my opinion, Ajarry is unlucky of gaining freedom in Africa as she is kidnapped and held captivate. This reflection is African identity were erased like speaking their own language or engaging in religious practices by the white Americans. Society also plays a role in the Real Durwan of the skeleton keys which Boori Ma carries.

It is the ultimate key giving a person the ability to bypass any lock. The key can only become a real tool of power and entrance if Boori-Ma is prepared to avoid the rules in her society and break the law. The setting is a vivid image of the surrounding the characters is located. For instances, the setting in Underground Railroad takes place in South on the Cotton planation tracing to Cora’s heritage and in a Real Durwan is in an Indian apartment building.

Another element is the theme. Conflict and struggle were demonstrated in both stories, Boori-Ma and Ajarry is unofficial, unpaid of a lower-middle class. Their old age is a major cause of miseries and harsh realities of their life did not turn them into a bitter annoyed character but a calm and good hearted one. Performing a lot of tasks on the planation or in the building both characters is not rewarded for hard work as there are kept from the outside world. Boori-Ma is elderly ascribed as a sixty-four year old Indian woman. Every day she walks up each flight of stairs and sweeps the stairwells where she would have conversation with the residents of her building. The struggle I assume she faced walking the stairs is the difficulties in her life. In these conversations, Boori-Ma flash back to her past life as she reflect of telling the stories of her life and religious differences loosing her husband and children was due to the effect of the partition of India. Cultural differences is seen when analyzing the behavior of the residents. Lack of understanding the majority and brought up in a different time the cultural difference between them and Boori-Ma is a daily struggle with reality consequences of Partition which most of them do not understand fully. The residents accused her of being the poorest an outsider. Reflecting of Ajarry life in the Underground Railroad, she is also separated from her relatives when she was captured, sold many times and bearing the loss of her three husband and four children.

The tone and mood for the short story A Real Durwan is sorrow and depressing. The loss of her skeleton keys and life savings gives us the mood of her life coming to an end. The ending of her being blamed for robberies and kicked out of the apartment ends it on page 82. In the Underground Railroad it is Sarcastic, bitter and reality.

In conclusion, there were a few similarities between Boori-Ma and Ajarry in terms of grieving for the loss of husband and children, cultural differences and sad tone. The characters went through hardship in the past life as well in the present and trapped having no escaped.

Comparison of "Interpreter of Maladies" and "Underground Railroad". (2021, Aug 06). Retrieved from http://studymoose.com/comparison-of-interpreter-of-maladies-and-underground-railroad-essay 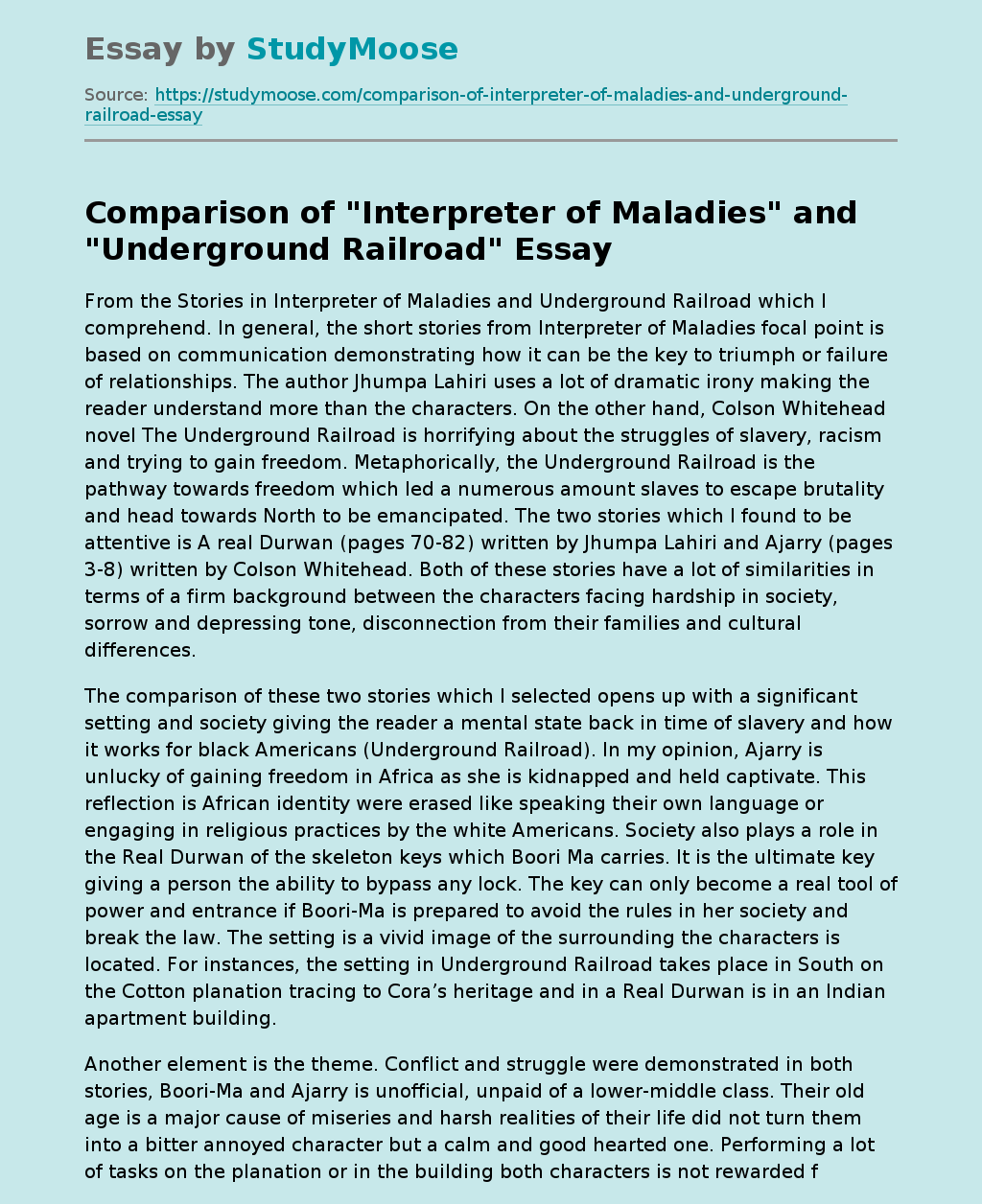