Comparison Between Vampire and Werewolves

Don't use plagiarized sources. Get your custom essay on
“ Comparison Between Vampire and Werewolves ”
Get custom paper
NEW! smart matching with writer

This is because of the numerous novels, television shows and movies about them.

Apart from this vampires and werewolves cannot be killed easily. They recover from any injury within seconds. But like all other creatures they have their own weaknesses.

Vampires can be slowed down with an herb called vervain and for werewolves it is wolfsbane. A wooden stake in the heart will kill a vampire and a silver bullet to the heart will kill werewolf. These two creatures are more different than similar. Firstly, vampires and werewolves are arch enemies. To become a vampire one has to die first. They have to die with vampire blood in their system and then when they are woken up from their death they need to feed on human blood in order to complete their transition.

Anyone who wishes to be a vampire can become one. But becoming a werewolf is genetic.

The werewolf gene has to be passed on to you to become a werewolf. So even if you do not want to become a werewolf and you have the werewolf gene in you, you will become one. Because the vampire has died before becoming one, his/her heart does not beat. And if it does not beat it will not pump blood. So vampires drink human blood to survive. The second difference is that vampires are burned by the sun and werewolves can only transform when there is a full moon. This is known as the sun and the moon curse. There are some powers that vampires have that werewolves do not have.

Vampires have the power to compel human beings, meaning that they can tell you what to do and you have to obey them. You are under their total control. Unfortunately, werewolves have no similar powers. Also the blood of vampires can cure any human of injury. If you are badly hurt and about to die vampire blood can save your life. But then again vampires cannot enter your house unless they are invited in. So you have to be careful who you invite into your house. Because once invited they cannot be uninvited. Also one bite from a werewolf can kill a vampire.

Vampire bites do not have any effect on werewolves. Another special attribute of vampires is that they can turn off their emotions. In my opinion I think this is bad because if you turn off your emotions, you turn off your humanity. So you feel no love, no hate no anger, no happiness. At that time you are just a creature without a soul. Personally I prefer vampires over werewolves because firstly, you can choose to become a vampire but you cannot choose to become a werewolf. Secondly, a vampire can just survive on the blood of animals and so you do not have to kill human beings for food.

Whereas werewolves cannot control what they eat because they are not in their correct frame of mind when they turn into werewolves. Finally, a vampire can compel human beings so you can make a human being do whatever you want him or her to do. Also you can always be a vampire each and every day, throughout the whole day. Even in the sun you are vampire though you cannot go out. But when you are a werewolf, you are a werewolf only once a month, when there is a full moon. So which monster would you rather choose to be, a vampire or a werewolf?

Comparison Between Vampire and Werewolves. (2016, Oct 22). Retrieved from https://studymoose.com/comparison-between-vampire-and-werewolves-essay 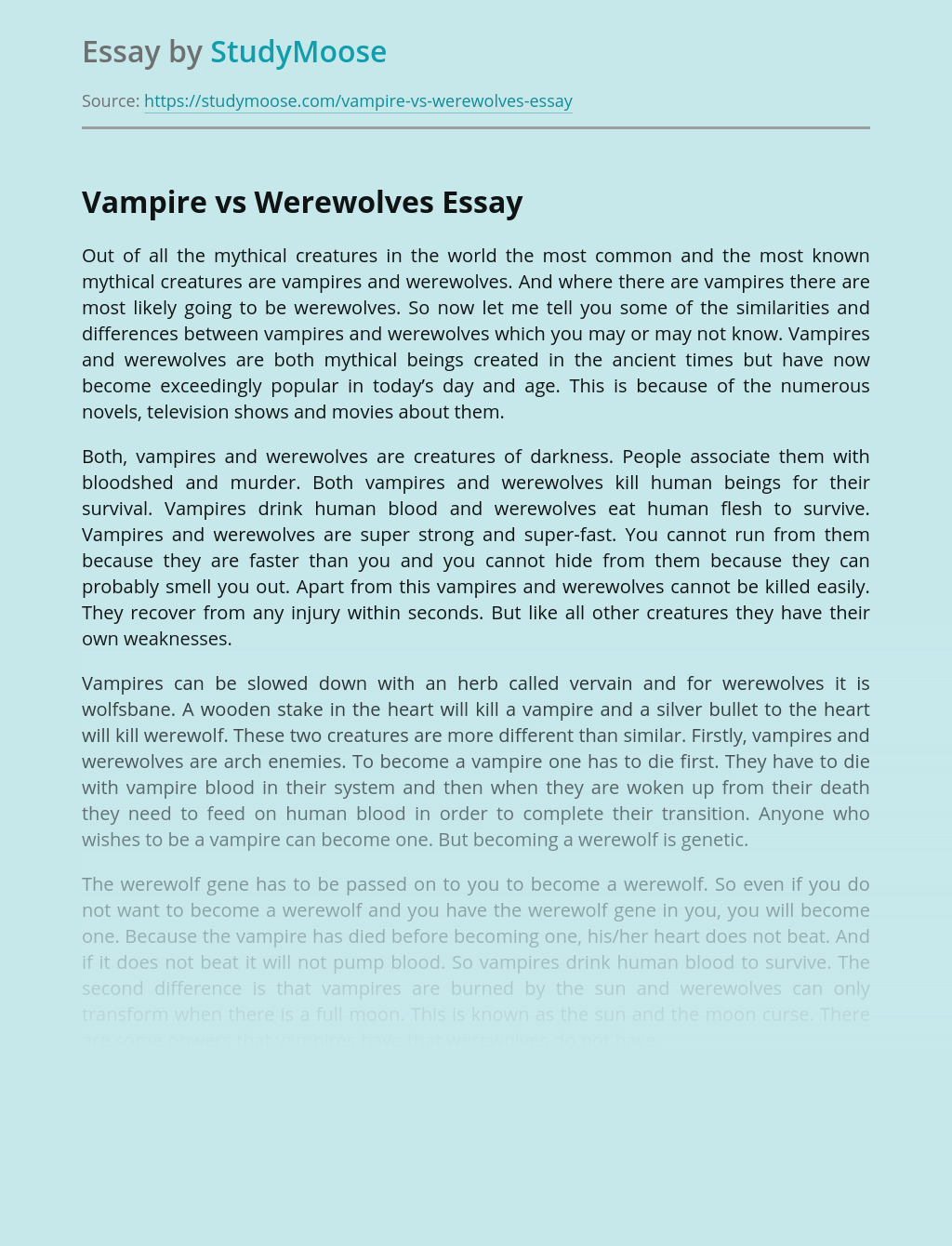