The Wild Evolution of Vampires

Bram Stoker’s “Dracula” is the story of Count Dracula who moves from Transylvania to England because the people of his country have learned that he is a vampire. In order to continue his reign over a new population, he must start anew. However, a few men discover his plan and in order to stop him, they must learn about his powers and weakness and why they are what they are. To Dracula, everything seems to be going exactly as planned until Van Helsing arrives in Carfax.

Don't use plagiarized sources. Get your custom essay on
“ The Wild Evolution of Vampires ”
Get custom paper
NEW! smart matching with writer

This may seem like a new action-packed thriller coming to the big screens, but it is the vague summary of an epistolary novel written in 1847. The image of vampires has changed throughout history and the reason why is that people’s idea of vampires has changed. While many things have changed about vampires, some things remain the same.

In modern times, according to Emyr Williams, “It has been argued that the growing resurgence of contemporary vampire literature has resulted in the re-emergence of the vampire as a new sexy modern beast not seen in fear but rather seen as a creature that is respected, desired and even wanted”(359).

In Dracula, he is made out to be a brute whose only desire is that of drinking blood and perhaps building a harem. In the movie Twilight, a modern adaptation of vampires maintains a very human day to day life. Going to school regardless of their unapparent age, maintain intimate family and emotional relationships, etc. are all characteristics that exist to replicate a normal domesticated human existence.

Families of vampires can live among each other and help each other maintain normalcy while staying true to their need to feed on blood. Both modern-day vampires and Stoker’s classic vampire usually must relocate many times due to their ability to never appear older under certain circumstances. In some modern-day entertainment, creations of vampires have advanced economically to have access to blood without needing to feed straight from a human blood source. Ultimately, this ability to obtain nourishment further civilized and domesticated today’s vampires.

The satanic image of a bloodthirsty monster that lay resting on earth native to his home in a ruined place of worship is replaced by an evolved version of modern-day vampires. An entire culture of vampires exists in the media today. Today’s undead is more admirable for being overall attractive and therefore marketed to a much larger audience. According to Dijana Vuckovic, “Dracula was intended solely for adult readers and today an obvious shift of focus is made towards younger readers (teenagers and even children). This is supported by the introduction of children’s characters of vampires” (5). Dracula’s appearance was noted as very pale and that has stayed true in modern-day vampires as well as the ability to maintain a youthful appearance only when well fed. Although today’s vampires maintain their looks over the decades, their strength and health can decline if they are unable to maintain their liquid diet. Modern-day vampires usually stay the same age (throughout the duration of whichever movie or book series they appear in) as when they were turned into a member of the undead population. Another similarity in both vampires in history and those in today’s literature is that they do more than just feast on blood. Their victims, maybe better known as meals, lead to another person becoming undead eventually.

Action, chaos, adrenaline, and adventure are the theme of most appearances of vampires in today’s movies, books, and even games. According to Noel Koh “a propensity for spectacular physical action, a narrative structure involving fights, chases, and explosions, and in addition to the deployment of state-of-the-art special effects, an emphasis in performance on athletic feats and stunts” (250). In modern times, with advancements in technology, vampires have been able to evolve from the slow reading horror of the past into an action-based movie or show. Instead of an action scene, Dracula reads like “After a while, there was the low howl again out in the shrubbery, and shortly after there was a crash at the window, and a lot of broken glass was hurled on the floor.” (122) according to Lucy. Movies such as Blade introduced a race known as a Dhampir: one that had all strengths of a vampire, but none of its weaknesses which provided a chance for high action fight scenes along with actual risk. The main character, Blade, built on the character that Van Helsing may have started as far as a vampire slayer is concerned.

In Stoker’s novel, Dracula can change forms from a “tall, thin man” (246), to a “bat” (246), to “thin, white mist” (245). Although vampires in general have several strengths that help them obtain their food source, they have many limitations. When Dracula steps into the sunlight, he loses his strength. In some books and movies, vampires’ skin exposed to sunlight will set off a glimmering light show. In others, the vampires may burst into flames or burn them if their skin comes into any ray of daylight sun. A stake has always been a typical weakness among all vampires: white oak is preferred by Dracula. He is also defenseless while he is sleeping.” I could not say which- for the eyes were open and stony, but without the glassiness of death- and the cheeks had the warmth of life all their pallor; the lips were as red as ever. But there was no sign of movement, no pulse, no breath, no beating of the heart.” (41). Jonathan Harker. Several other weaknesses could be fatal for Dracula in Stoker’s novel; decapitation, fire, holy symbols, running water, and the lack of an invitation inside. Obviously, some of those weaknesses would be relevant to modern-day vampires as well. Decapitation and fire remain a central weakness among all vampires while holy symbols, running water, and the lack of an invitation are rarely all seen together in modern day vampire literature. Another weakness specific to Dracula is his obsessiveness and childlike mind. “Well, in him the brain powers survived the physical death; though it would seem that memory was not all complete. In some faculties of mind he has been, and is, only a child” (259) Dr. Seward. His child-like mind causes him to do the same things repeatedly. The cause of this was reportedly due to his brain not developing past the age that he was turned into a vampire. He seems to always achieve the same result, never having a new or different purpose. Today’s vampires seem to build knowledge over their never-ending lives and appear mentally above average in comparison to others that seem their age. Dracula was smart in his own way. Would today’s vampires be considered weaker or stronger than Dracula in comparison? Each variation of vampires imagined throughout history each has its own weaknesses and strengths.

Dracula was a King in Bram Stoker’s novel. He has his own country which he amassed over generations of life. Most vampires are seen today and in past literature have been alive long enough to gain wealth and quality material possessions. They seem to be attuned to a rich, fancy lifestyle with the latest technology. In the movie Day Breakers, for example, all the characters were vampires. The protagonist was a vampire doctor that was wealthy. Edward Cullen’s family had lavish homes and vehicles in the movie Twilight. Insecurity free and wildly confident, the new version of vampires makes it easy to wish one could be a vampire instead of the horror and fear that came with being turned into the past versions of vampires caused. In the show Santa Clarita Diet, one of the main problems that the main characters in the show have is everyone wanting to be turned into an undead person to receive all the attractive benefits.

In conclusion, today’s vampires reflect what it means to be a human in the society we live in. History’s vampires reflected the fear of being discovered as being different in a sexist, feminist, and less accepting or forgiving time period. The disrupted vampire personality of Dracula appeared as uncontrollable around the scent or view of blood or like a vicious, lunging predator. “Vampires have become domesticated, and have ended up in safe zones, occupying a space in marketed mainstream literature, and also making their related characters, as well as the readers, feel safe in their presence. Especially in the past two decades vampires have become “defanged”—not only in the sense in which Susannah Clements uses the term, applying it to the spiritual content of the vampire metaphor but in a broader sense, which understands bite as a synecdochic expression of a metaphorical act.” (268) per Ildikó Limpár. Vampire characters today refer to several traits of history’s version of the classic vampire. The changes in the depiction of vampires in today’s media and literature are to attract a much larger audience. Adults, teenagers, and children each have a mental image of vampires directly related to the books, tv shows, and movies they have seen recently. As explained, these entertaining and admirable versions of vampires are a far cry from the origins of Dracula and Camilla. As a nation, we have become desensitized to the danger and fear that was caused by history’s vampire characters. The image of the undead has changed, yet some characteristics will always remain tied to the beginning of the literary creation of vampires.

The Wild Evolution of Vampires. (2020, Oct 30). Retrieved from https://studymoose.com/the-wild-evolution-of-vampires-essay 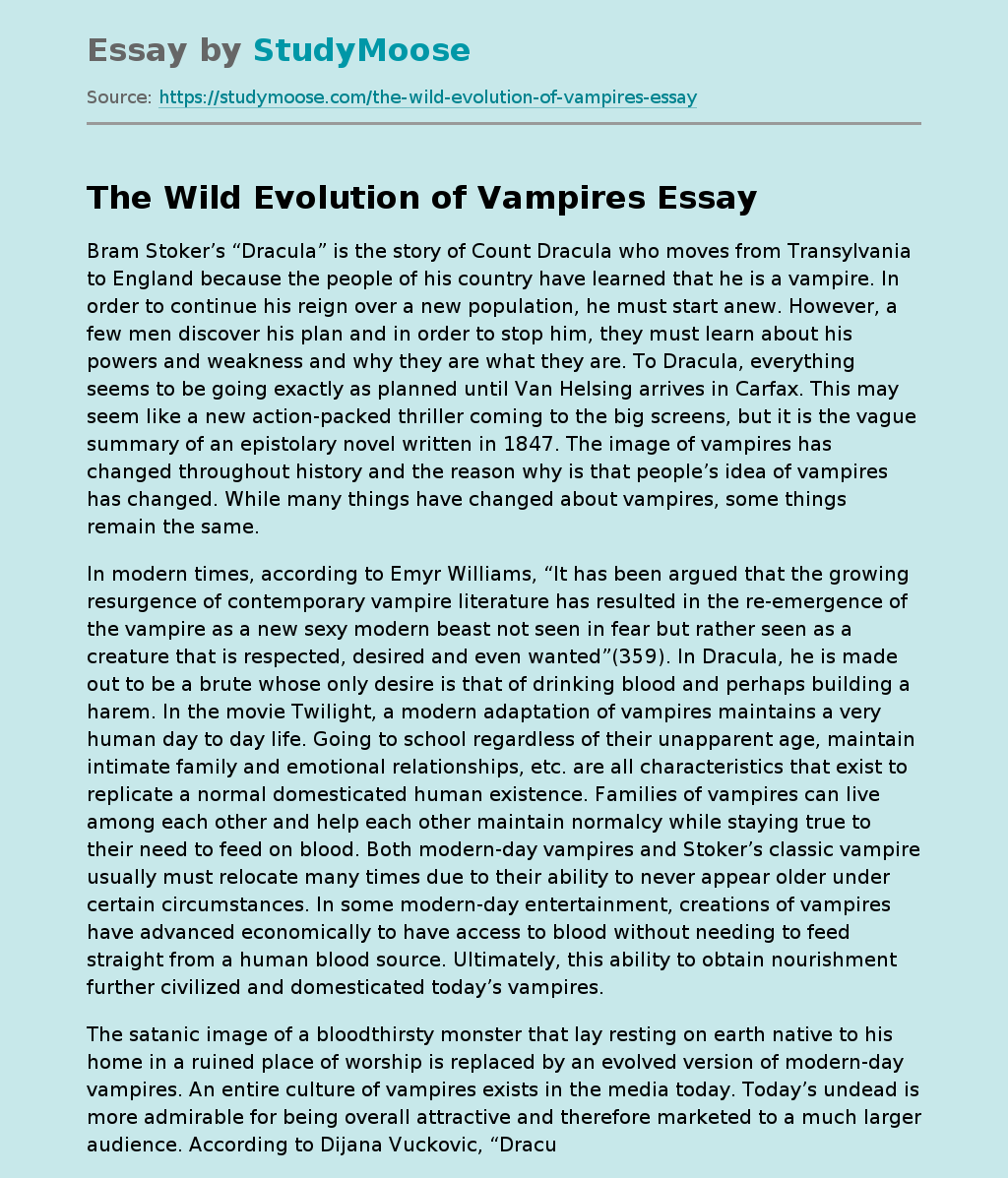