The issue of single-sex schools versus co-ed schools is very much debated and controversial. There are strong supporters for both sides, giving good and valid arguments. It is an issue with a long history, receiving great attention from the media, researchers, teachers and most of all, parents. Although there are many studies that try to answer this question, the problem will probably continue to exist and be debated, the opinions being mixed. After all, choosing a type of education is a matter of personal choice.

Don't use plagiarized sources. Get your custom essay on
“ Comparing and Analyzing the Differences Between Co-Ed Schools and Single-Sex Schools ”
Get custom paper
NEW! smart matching with writer

Nonetheless, there are several clear advantages and disadvantages of both, and there is evidence that there are differences when it comes to teaching styles, progress and achievements. Single-sex schools Single-sex schools have a long history, probably being most popular during the 19th and 20th centuries. In these schools, boys and girls are separated, the classes consisting of only one gender. There are schools that have separate buildings for boys and others for girls, or they only admit one gender into their academic program.

This is a practice which is thought to help improve the results of the students. According to Mary Elizabeth, writer for EducationBug. org, one of the arguments is the differences between the brains of girls and boys. Others are different stress responses and hearing sensitivity “and that these differences can best be responded to by differentiating their instruction and learning environment” (CoEd or Single Sex Education). These reasons seem to be plausible and they are enough for many people to choose this kind of education for themselves or their children.

There are some advantages of single-sex schools.

As mentioned above, the supporters of single-sex education have many arguments and perhaps the greatest one of them is the educational benefit. It is believed that this kind of education improves student achievements and progress. Girls and boys learn and think in different ways, therefore they should be separated and the studies should be based on each gender’s interests and strengths. Different teaching techniques should be used too. Since girls are more mature than boys at a younger age, they can be more serious and focused in school, whereas boys have a lower concentration limit, and they act out ore often than girls.

Leonard Sax, who has a PhD, is an M. D. in Montgomery County and founded the National Association for the Advancement of Single Sex Public Education, claims “Teach boys properly, and they will learn”. All these can improve a student’s performance. Furthermore, there is a lack of distraction in single-ed. Boys are sexually distracted by girls, being at an age when they are aroused often, and girls are distracted by the boys’ behavior (Single-Sex Education).

Thompson and Ungerleider, researchers for the Canadian Center for Knowledge Mobilisation [sic] state in their report “Girls are able to focus more on academics without having to worry about pleasing the guys”. They have also quoted a 15 year old male student who said “When there is a hot girl in class you tend to look at her not to concentrate”. This proves that distraction plays an important role in education, and the single-sex schools are a means of controlling it (Single Sex Schooling). Moreover, another argument is the gender gap. This refers to the difference between girls and boys.

Usually, girls are academically performing better than boys. But the focus is not on how well the girls are doing but that they are doing much better than boys, the latter being often underachievers. By separating the genders in classes could be beneficial to them, focusing more on subjects they excel at, and applying different teaching methods (Single Sex Schooling). For the many supporters of single-sex schools, the improvement of achievements and progress, the different teaching styles, gender interests and strengths, as well as the gender gap are the main arguments.

Single-sex ed is a popular choice among parents, even though not all students want it or feel comfortable with it and most of them, if given a choice this would not be their first. However, despite the many advantages, there are also down-sides of single-sex schools and education. Kristin Stanberry, a writer and editor specializing in parenting, education, and consumer health/wellness issues, argues that there are many who believe that gender separation is not wise as there aren’t many instructors who are able to adapt their teaching methods and understandings to only one gender.

This could lead to a worse development and achievements, the exact opposite of what single-ed’s aim is. Even more, maybe the greatest counter-argument is that this way of education promotes discrimination and sexism. This is what many people believe, among them being the American Civil Liberties Union which even filed a suit against a school in Kentucky for organizing single-sex classes in their institution (Single-Sex Education: the pros and cons). By attending a single-sex school, people may develop shyness and have problems interacting with the other sex in the future, for there was no precedent during their education.

Co-ed schools: Unlike single-sex schools, co-ed schools are educational institutions where boys and girls are not separated, being no restrictions and no classes where only one sex can attend. It is not a practice as old as its opponent, in the past the higher forms of education being reserved only for male students. However, in the recent past they have gained in popularity, now having many supporters. Co-ed schools have many clear advantages in comparison to single-sex ones.

One of these advantages, as it is pointed out on the University Language Services’ website, by having a class with both men and women it offers more diversity, giving a better chance to interact with each other (Co-ed vs. Single Sex Schools). It helps the students to develop their ability to talk to the other sex, developing their social skills much more than single-sex schools. Edelman Public Relations, a firm specialized on doing researches and reports, did a study on Canadian students which shows that students attending a co-ed institution have a higher level of self-confidence.

Furthermore, due to interaction between sexes, co-ed attendants tend to develop a deeper respect towards the other gender. 80% of students in co-ed declared that they find it very easy to create friendships and establish relationships with members of the same sex, and 72% find it easy for members of the opposite sex, while single-sex students reported that they make friends easily in only 58% of the times. Also, they have a strong feeling of security. A research reveals that “students attending co-ed schools are much more likely to discuss ideas from their homework with opposite-sex friends (83%) than students in other school environments.

This interaction results in exposure to a greater diversity of views and opinions as they share ideas of both sexes” (The Benefits of the Co-educational Environment). On their website, the Cathedral School of Llandaff, Cardiff, argues that a co-ed school is also beneficial in fighting sexism and discrimination as opinions of the both sexes are expressed and debated, resulting into a better understanding of each gender and the notion of equality (Advantages of Co-Education). Alongside with all these favorable features of co-ed schools, there is the choice of people.

Students tend to choose this kind of education over single-sex institutions for the above reasons, as well as the higher possibility of finding a temporarily or life-time partner, which is becoming quite important for present generations. However, although co-ed has many advantages and benefits, it also has many disadvantages. Firstly, University Language Services claims on its website that students may feel intimidated by the members of the other sex and will not participate in class discussions and activities as much as they would if it was a single-sex class (Co-ed vs. Single Sex Schools).

Becky Francis affirms in her book “Boys, girls, and Achievement – Addressing the classroom issues” that another disadvantage is the unfairness that sometimes occurs. Boys usually draw more attention to themselves, dominating the classroom and acting out while girls are quieter and more withdrawn. Also, studies have shown that teachers tend to favor boys by asking them more questions and making them participate more than girls (30-31). Furthermore, Ruth Vanita, writer for the Manushi periodical, implies in the article “Some Disadvantages of Coeducation” that starting from an early age, boys tend to harass and tease girls.

The effect is that this makes girls feel insecure, ashamed and might develop a negative attitude towards men as they grow up. In addition, when pairing up for sharing a desk or picking group members for different activities, those who are left out or chosen last could grow an even deeper sense of insecurity. They might also feel unattractive for the other gender, develop emotional and psychological issues, which may later lead to something worse, such as depression. 29, 31-32) Thompson and Ungerleider implied in their report that there is a “dumbing down” phenomenon as boys sometimes refuse to participate in class, give the correct answers or do homework as “it’s just not cool to be smart” and they feel they will leave a bad impression on girls if they do so. Another disadvantage is the competiveness. Girls tend to be more interested and academically active, generally being better students than boys (Single Sex Schooling). This may result into negative reactions from the boys, marginalizing girls.

It could also lead to an aggressive response, or other bad outcomes such as cheating in order to keep up with the girls. Finally, it can lead to an even more deepening of the gap between boys and girls. To use a non-academic term, boys tend to be “slackers”, being lazier than girls and try to persuade them into sharing homework and helping them or giving them the answers to tests. All in all, the issue of co-ed and single-sex educational institutions is very much debated and controversial lately receiving much attention from the media, researchers and parents.

They both have many supporters providing arguments trying to prove that one is better than the other. There are many positive and negative effects, advantages and disadvantages of both, and there isn’t yet a clear conclusion whether one is better than the other. While there are studies and different opinions on this issue, the way to go is a matter of personal choice. In the end all that matters is how parents and students feel and what their interest and feelings are about it when choosing one form of education or the other.

And in what concerns me, I might be biased, as I’ve attended co-ed educational institutions my entire life, but I prefer this type of education, and I could never picture myself or my children being enrolled in a single-sex school. I say this because in my experience, co-ed schools have been beneficial for me and worked out to my advantage, and I strongly believe that the benefits of such an institution and the argument put forth by its supporters are strong and logical, so if it was my choice, I would choose co-ed.

Comparing and Analyzing the Differences Between Co-Ed Schools and Single-Sex Schools. (2016, Sep 26). Retrieved from https://studymoose.com/comparing-and-analyzing-the-differences-between-co-ed-schools-and-single-sex-schools-essay 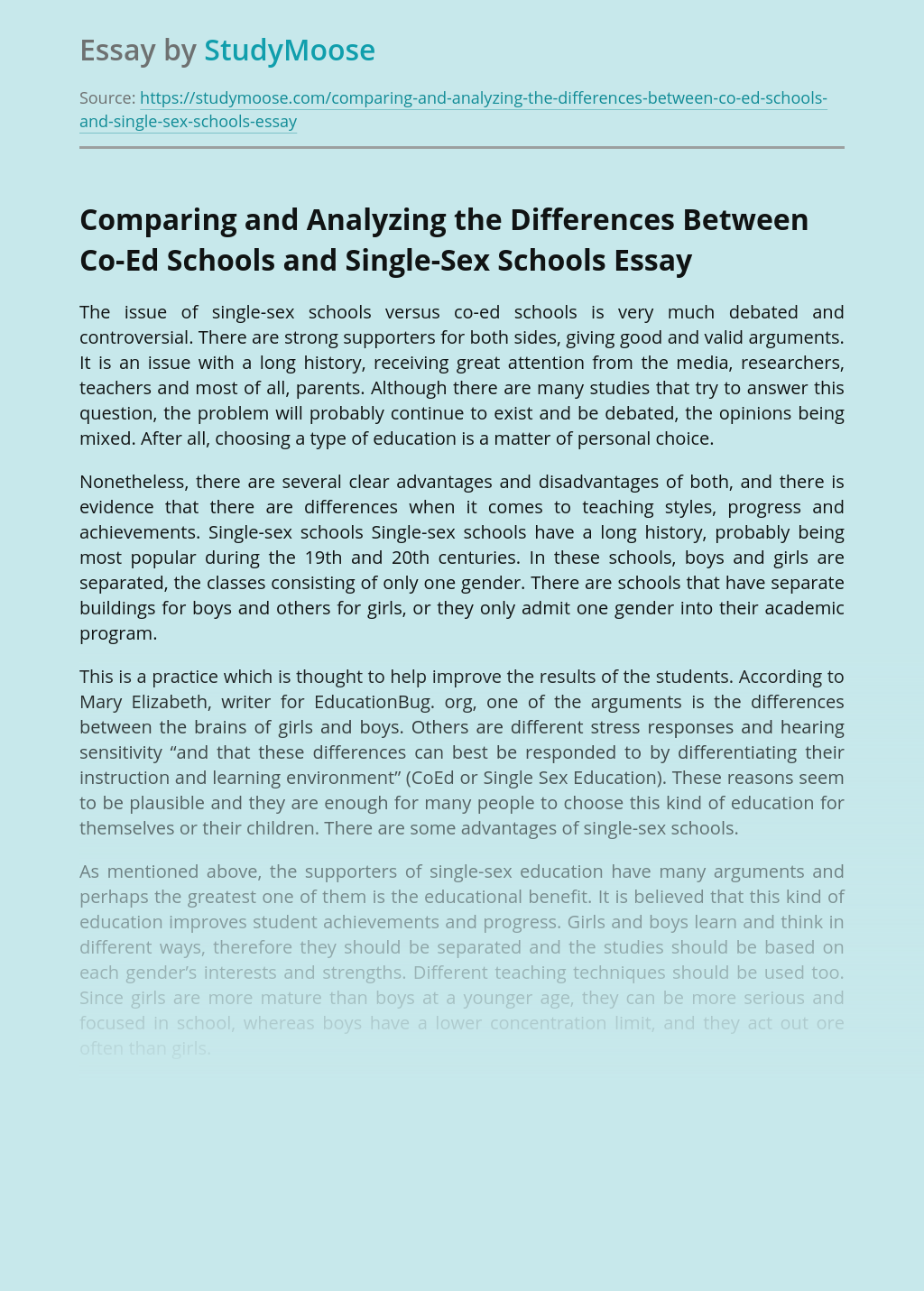