Benjamin Franklin, Thomas Paine, and Thomas Jefferson all had similar values and ideas about America concerning politics and its economy. They all also had a knack for getting people to follow them.

Benjamin Franklin, who had only died about 30 years before William Cullen Bryant wrote To Cole, the Painter, Departing for Europe, seemed to express different views about America vs. Europe in his letters. In a letter Franklin wrote to his grandson, he expressed how he wanted to return to America before his death but didn’t think he would be able to.

He seemed so passionate when writing about America. It was as if there was nothing better than America.

We also know that Franklin was very involved in politics and economics. He is one of the first people we read about who was very concerned with money and how it affected status and politics. Obviously wealth affects status in at least some aspect. Whether the wealth was measured by money or by land, it defined social class.

Only people of the upper class took part in politics.

Franklin was one of America’s founding fathers. He helped write the Declaration of Independence, which we still abide by today, over 200 years later. Benjamin Franklin listed 13 virtues with their precepts in one of his documents. He listed these to make sure he abided by all of them and just these 13. One of the precepts was ‘order’. He expanded on this by making a schedule of how his business and his life should run.

It listed what should be done for the day, including when he should eat and sleep. He was definitely ahead of his time and set the standards for Americans today.

Thomas Paine instilled his ideas onto others in Common Sense. He starts out by saying, “In the following pages I offer nothing more than simple facts, plain arguments, and common sense”. Just by writing this, he has already captivated the reader and forced them to see his views and just ‘common sense’. Paine seemed to specialize in revolts and working for the ordinary person. This was Paine’s involvement in politics; getting the common person to see how they were oppressed and how things should change. He took action by forming revolutions.

Paine felt that America should be free from British control. He stated, “We have boasted the protection of Great Britain without considering that her motive was interest, not attachment; and that she did not protect us from our enemies on our account, but from her enemies on her own account, from those who had no quarrel with us on any other account, and who will always be our enemies on the same account.” He used this to explain to Americans how Britain had created enemies for us because of their own personal reasons and when we were under attack, Britain didn’t care and sequentially, they had created enemies for both places.

Thomas Jefferson took part in politics as well as Franklin and Paine and was the principal author of the Declaration of Independence. Jefferson, unlike Franklin and Paine, was born into his wealth. He was never a commoner and therefore never knew what it was like to be in that position.

I find it interesting that someone of his stature would be allowed to help write the Declaration of Independence which helps guide everyone including commoners. He couldn’t possibly understand what would be best for them. This is probably why there are many things in the constitution that don’t seem fair to an ordinary person, such as the Electoral College. This system was basically created because a regular person could not have a vote left in their hands. Although Jefferson seems like he wants independence for America, it also seems like he doesn’t trust America to have this Independence.

All three people that I have discussed seem to differ in their views of America vs. Europe from Bryant. Bryant seems to be thrilled that America is based on Europe. Places such as New York and New England were almost exact replicas of the originals. Benjamin Franklin, Thomas Paine, and Thomas Jefferson were trying to change the way America was to make it a better place to live. It is because of these men that America is everything it is today. 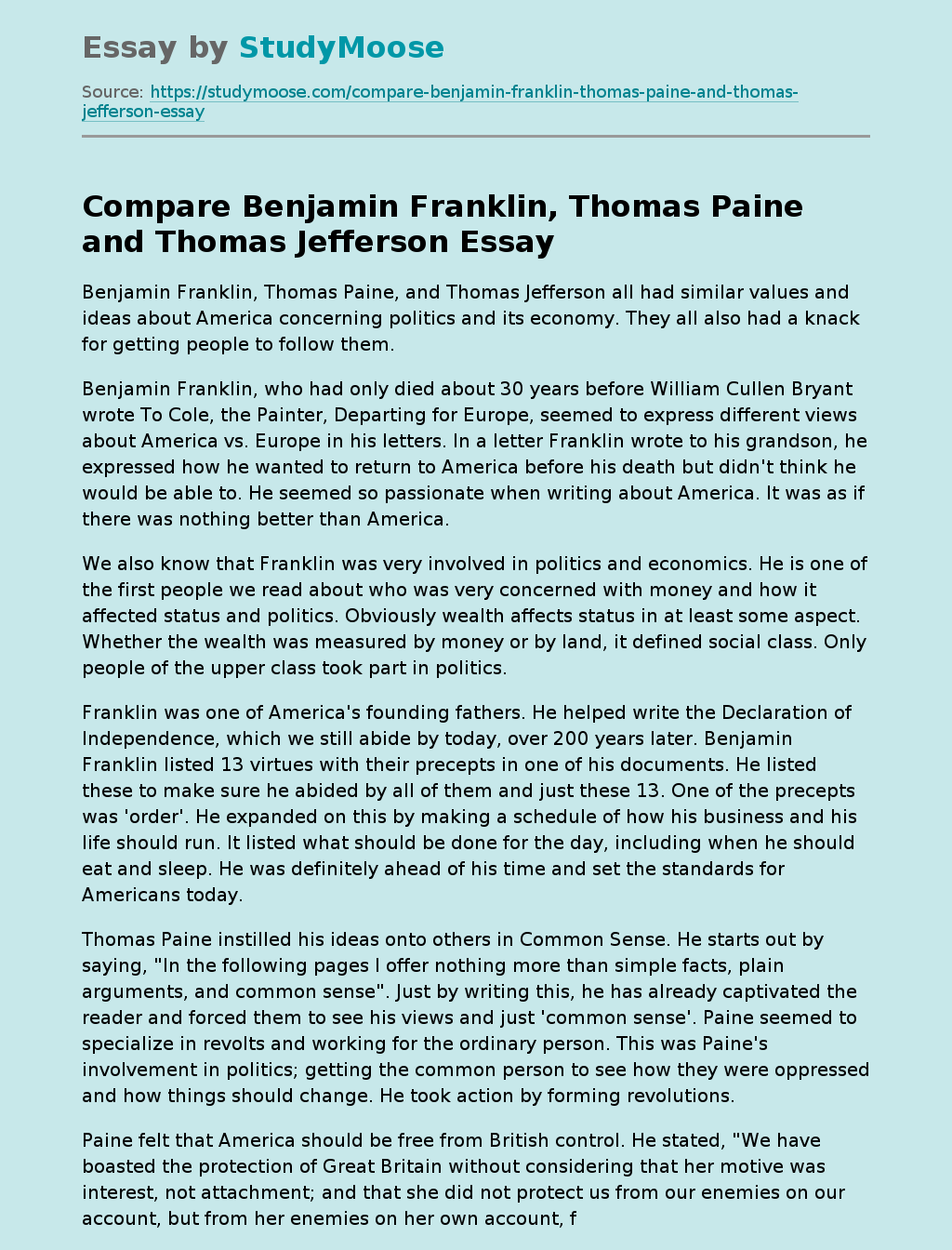