Compare and Contrast Egypt and Mesopotamia

Don't use plagiarized sources.
Get Your Custom Essay on Compare and Contrast Egypt and Mesopotamia Just from $13,9/Page

Sumerian religion was based around the praise of 4 life providing divine beings, the god of paradise, the goddess of earth, the god of air, and the god of water. In Egypt, there were around 2,000 recognized gods and goddesses, one being “Nun” likewise the god of water.

All 3 rivers were sources of life. The rivers provided healthy hydration for each civilization. The water supported life, such as fish, providing a food source. When flooded, the rivers supplied fertile soil, or silt. Nevertheless, the Egyptians were blessed with the “Gift of the Nile” as the Nile flooded at the exact same time each year, while the Tigris and Euphrates’ floods were violent and unforeseeable. Both civilizations used their rivers as irrigation systems.

Egyptians and Mesopotamians cherished the importance of many things, however they differed immensely in the way they approached death and afterlife. Mummification is globally known and has become somewhat of a “Halloween joke”, nonetheless the Egyptians saw the preservation of the body as a serious subject. The purpose of mummification was to maintain the human structure as much as possible, in order for the spirit to find its way back to its body. Egyptians were so enthralled with afterlife that they created small tunnels within the pyramids just big enough to allow only the spirit access in and out of burial chambers. The Sumerians lived a much more volatile existence. Their funerals were uncomplicated for their passage into the afterlife.

The Sumerians were one of the first peoples to develop a writing system. The name of their writing system, cuneiform, was named after the wedge shaped utensil. It was etched onto clay tablets, which were then fired in kilns to preserve the writing. The Egyptians developed a different system of writing called Hieroglyphics. It was a very different style of documenting history. The Egyptians wrote their information on papyrus created from reeds. Papyrus was cheaper and easier to produce than clay tablets. This resulted in a vaster amount of records kept by the Egyptians than the Mesopotamians. The differences in geography between the two civilizations led to the development of different writing technology.

Compare and Contrast Egypt and Mesopotamia. (2017, Jan 27). Retrieved from https://studymoose.com/compare-and-contrast-egypt-and-mesopotamia-2-essay 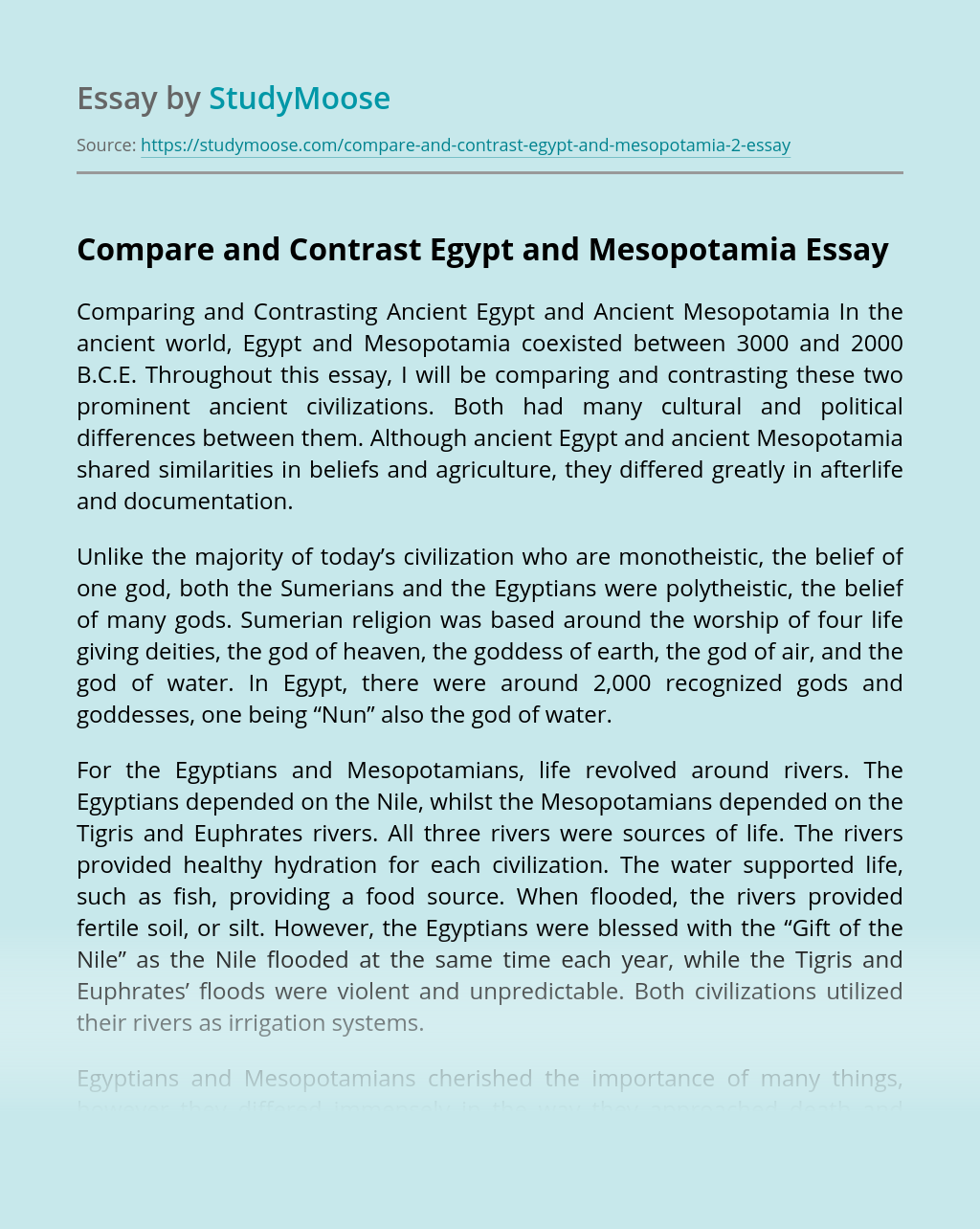 Samuel P. Huntington shocked the world in 1993 when he published “The Clash of Civilizations” in the journal of Foreign Affairs. Huntington states “most important conflicts of the future will occur along the cultural fault lines separating these civilizations from one another” (Huntington 1993, 25). He claims future conflicts after the Cold War will involve...

1. Compare and contrast key characteristics of two early civilizations (choose from Mesopotamian, Shang, Indus Valley, Chavin, and Phoenician) in terms of three of the following: economy, political system, art and architecture, religion, technology, legacy. Answer: Of the world’s first civilizations, all successful and renowned were located on or near a river. The Mesopotamian and...

View sample
Get Essay
Geography’s Impact on Mesopotamia and Egypt

The ancient river civilizations of Mesopotamia and Egypt were a significant aspect of our world’s development from an uninhabited planet to the cultured society known today. The geographical features of their regions heavily affected how their people lived and their relationship towards other countries. Both ancient Mesopotamia and ancient Egypt used their rivers as important...

What is civilization? (Freud-Style) According to Freud and his analysis of what “Civilization” is written and documented in the novel, “Civilization and its Discontents,” he mentions that the word “civilization” describes the entire amount of achievements and policies that differentiate our lives from those of our animal forefathers. It likewise serves 2 purposes – to...

In Wuthering Heights there is a clear battle between human nature, and the attempt to control it with civilization and culture. The conflict between nature and culture which is a part of the thematic structure of this novel is presented in the relationship between two residences: Wuthering Heights and Thrushcross Grange as well as its...