Don't use plagiarized sources.
Get Your Custom Essay on Communication in Nursing Just from $13,9/Page

However, for communication to succeed properly it must be reciprocal. This work has illustrated some examples of verbal and non-verbal communication.

A good relationship is vital to quality patient care, clearly both nurse and colleague have the same agenda, to care for the patient, improve and speed up recovery (Boal, Burke, & Mitchell 2004;Gasparis, 2004).

Boal, Burke and Mitchell (2004) believe “better communication among providers can be a tremendous boon to older patients and their families; thus, improved nurse-physician communication is not only a remedy for diminished job satisfaction, it is also an elixir for improving patient care”. Clearly the use of verbal communication between the nurse and colleagues affects the relationships with patients, yet there are many factors involved in the way verbal communication is expressed.

The effectiveness of this form of communication is however dependant upon several fundamental factors (Stein-Parbury, 1999). Certainly, the use of language reflecting age, gender, culture, and developmental level, is imperative in positively affecting the patient’s trust and understanding. For instance, the vocabulary used when communicating with a child, will no doubt differ from that of an adult due to age difference and developmental stage. Similarly, when interacting with patients from different cultures, consideration of dialect and often-contrary meanings is a priority in nursing practice to avoid patient misinterpretation (Creasia, 1996).

Whilst vocabulary content is of great consequence, the manner in which it is applied specifically intonation, clarity and timing can affect the nurse-patient relationship (Crisp & Taylor, 2003). To illustrate, a friendly, informal warm welcome in the initial communication can establish trust (Stein-Parbury, 1999). McCabe (2004) suggests that a patient centered approach is of most importance when attending a patient. Encouraging words can give the client a sense of purpose; it can encourage interaction, gives the opportunity for self expression and can strengthen the patient’s problem solving skills (Crisp & Taylor, 2003).

Indeed initial verbal exchanges are critical to the establishment of a therapeutic nurse-patient relationship engendering sincerity, respect, empathy and understanding (Crisp & Taylor, 2001). Despite the undoubted ability of verbal skills affirming the nurse-patient relationship, it is non-verbal communication which comprises the majority of interpersonal relationships in nursing practice (Arnold & Blogg, 1999).

While both forms of communication are of equal significance Argyle (Chambers, 1998) suggests that “the non-verbal component ofCommunication is five more times more influential than the verbal aspect”. Bensing, Caris-Verhallen and Kerkstra, (1999) believe that there are five non-verbal behaviors found to be essential to the nursing care, eye gaze, head nodding, smiling and body positioning. These styles of non-verbal communication can be grouped together to form body language. Chambers (2003) also adds “touch, physical appearance and passive listening”. Through careful consideration of those non-verbal signs, nurses are able to gain a more profound insight into the emotional needs and experiences of patients, thus encouraging additional patient investigation (Stein-Parbury, 1999).

Clearly these signs of non-verbal communication together with appropriate use will endeavor to enhance the nurse-patient relationship. According to Caris-Verhallen, Kerkstra & Bensing (2002, p. 809) “to express warmth and empathy the nurse need to make eye contact with the patient”. However, eye contact is a special exception in non-verbal communication (Vernallen, Kerkstra & Bensing, 2002). It can reveal some hidden and profound feelings that cannot be expressed in another manner that will serve as a role in emphatic connection (Benjamin, 2005). For instance, in western culture, looking people in the eye is assumed to indicate honesty and straight forwardness, in Latin and Asian cultures it represents aggression and/or disrespect (Le Roux, 2002). Certainly in these circumstances, the importance of limiting eye contact and touch in appropriate cultures and regarding them as culturally dissimilar ensures patient misinterpretation is avoided.

Additionally the use of touch can in some cultures be a sensitive issue for example in the Muslim culture, even in an Australian hospital it is inappropriate for a male midwife or nurse to touch or deliver a baby of an Muslim patient (ICE, 2001). However, touch can have a very positive outcome in the healing of patients, emotionally and physically. Weiss (Bush,2002) established that touch can slow heart rate, lower the incidence of cardiac arrest, decrease blood pressure, and reduce anxiety. Touch is often replaced by gestures and verbal responses. In spite of this, when patients are unwell or injured; their feelings may be enhanced by a friendly, warm touch (Duldt 1998).

Furthermore whilst touch is of great consequence, physical appearance is a powerful aspect of non-verbal communication (Bensing, Caris-Verhallen, & Kerksra, 2002). A nurse should communicate with his/her appearance that he/she is dedicated and professional. Crisp & Taylor (2001) believe “it helps to establish the nurses’ trustworthiness and competence”. If a nurse’s appearance is not portrayed in a professional demeanor it could harm the nurse-patient relationship from the beginning. Whilst physical appearance is also of great importance listening is probably the most effective therapeutic communication (Sundeen, 1998).

Listening is a non-intrusive way of sharing patients’ thoughts and feelings, it requires the nurses’ whole attention and in return the patient would recognize that the nurse is paying attention and thus will give them a feeling that they are of some significance and importance (Stein-Parbury, 1999). Accordingly, through this critical listening process, compassionate understanding of patient distress enhances their ability to confide in the nurse and further open the lines of communication (Balzer-Riley, 2004). Therefore while listening is essential part of daily communication in nursing practice, active listening requires the ability not only to hear what the patient is saying but to reflect feeling or intent behind the words (Klagsburn, 2004).

While there are advocates for both verbal and non-verbal forms of communication, it appears that the two are mutually beneficial. As evidenced by Cohen, Rankin, Stuart and Sundeen (1998), the accuracy of verbal expression relies heavily on the support of its non-verbal counterpart. Indeed, as Stein-Parbury (1999) claims, this challenging practice of communication requires a significant degree of self-awareness, or, the ability to reflect inwardly at personal reactions, responses, and feelings regarding a situation, thus enhancing wisdom for the benefit of circumstances.

In essence, when communication involving vocal content and emotion do not correspond, they exhibit obvious inconsistencies thus calling for further inquiry to enable accurate validation of patient concerns (Duldt, 1998). For example, a patient who verbalizes an absence of pain, yet displays obvious signs of discomfort through contradictory facial expressions and body language, imposes additional questioning by the nurse to gain clarification and therefore assist with appropriate care (Stein-Parbury, 1999).

In Concluding, the multifaceted verbal and non-verbal styles of communication are extremely significant elements of nursing practice.

This essay describes some important points and examples of different forms of communication, in particularly verbal and importantly the supportive non-verbal communication. Evidently, both verbal and non-verbal methods have inherently unique roles in nursing. However, it is when these methods are utilised in a complementary manner, that they most effectively denote empathy, trust and understanding. This essay also describes how listening is a big part of communication. Accordingly, the productive delivery and construal of both these communicative modes, contributes to the establishment of mutually satisfying therapeutic nurse-patient relationships, with the ultimate goal of assisting in patient recovery.

Bush, E., (2002). The use of human touch to improve the well-being ofolder adults: a holistic nursing intervention. The Journal ofHolistic Healing, 19, p.256. 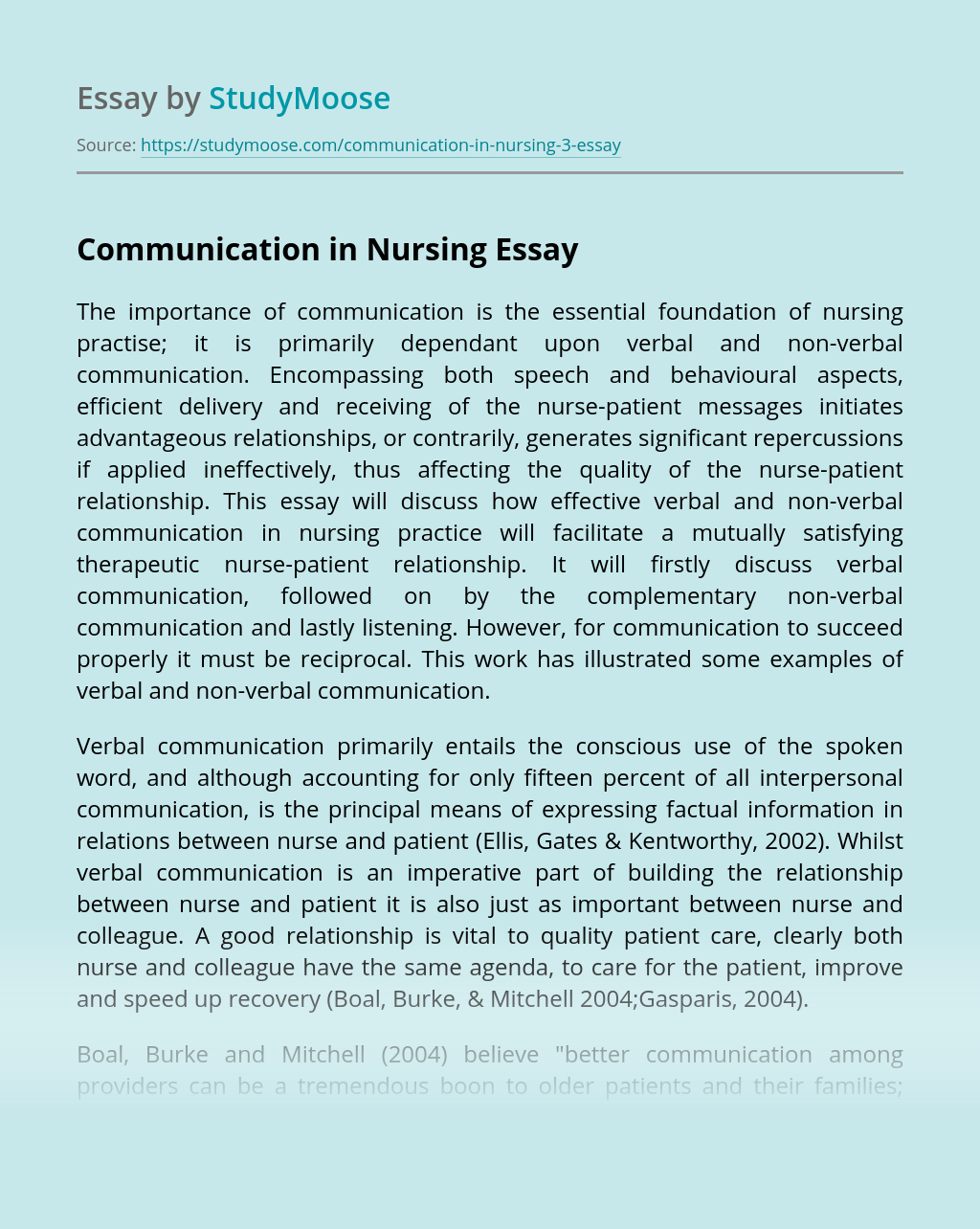 Listening Skill is a neglected Art

For my assignment, I observed at the daycare program housed inside my church called Gateway To Learning (2930 Rayford Rd., Spring, TX 77386), a Christian childcare provider for ages 6-weeks to fourth grade (after school). There are currently 185 children enrolled in the GTL program, including after-schoolers. GTL employs approximately 50 people, not including substitute...

Communication, according to the Free Dictionary, is “the exchange of thoughts, messages, or information, as by speech, signals, writing or behaviors”. It is vital in the development and maintenance of personal and professional relationships. It is important to understand communication also includes non-verbal as well as verbal acts. According to Rane (2010), 93% of communication...