Don't use plagiarized sources. Get your custom essay on
“ Common Arguments Against Campus Carry ”
Get custom paper
NEW! smart matching with writer

Allowing college students and other college employees to carry concealed weapons on campus has the potential to make the learning environment safer. It is necessary to notice that currently, some states have passed laws allowing concealed gun carry on campus. Proponents of this law argued that carrying concealed weapons is necessary measure of protection that gives students the opportunity to protect themselves. Lawmakers say that students want to feel safe and have the opportunity to protect themselves in dangerous and critical situations.

One more argument from supporters for weapons on campuses that it is better to allow students, professors, and employees to carry weapon rather than becoming victims of violence.

Opponents of the law believe that allowing students to carry guns on campus wouldn’t make campuses safer and, instead, it will lead to an increase in the number of suicides on campuses. Allowing guns in classrooms or on campuses will only increase risk as gun is not essential component for learning.

Schools and university campuses are one of the safest places and presence of gun will make students to feel unsafe in the environment that is supposed to be safe for learning.

There are many risks allowing concealed weapon on campuses and because of it students and college employees should not be allowed to carry concealed weapons. Students shouldn’t get used to the presence of guns in their classrooms. It is no doubt that public safety is a job for professionally qualified police officers, not teachers or students with absence of expert training. Furthermore, colleges and universities have many individuals who are fighting with some mental health problems such as stress or depression. Therefore, such groups of people are under risk. College students with some mental problems are more likely to use a gun on themselves than to protect themselves. It is just not possible to feel safe when there are guns around you. Many studies have shown that when there is more weapon, there are more gun deaths and more risks for tragedy.

Furthermore, armed students would not be able to stop a mass shooting. Besides, if weapons were to become easy available, it would result unintended consequences such as common disputes, enmity and jealousy to each other, self-harm, and reckless behavior that will make college campuses less safe and harmful. College students need to study, enjoying the end of their childhood and living the brightest and most carefree time of their lives. Giving the right to carry concealed weapons on college campuses is dangerous and irresponsible step that would lead to tragic results. So, it is very important to have police officers on campuses to support safety of the students and the teachers and create really safe environment for learning.

In conclusion, concealed weapon for students, teachers and other employees is certainly controversial question that has many opinions but concealed weapons should not be allowed on campus as the possibility for harm is much higher the good it could bring. 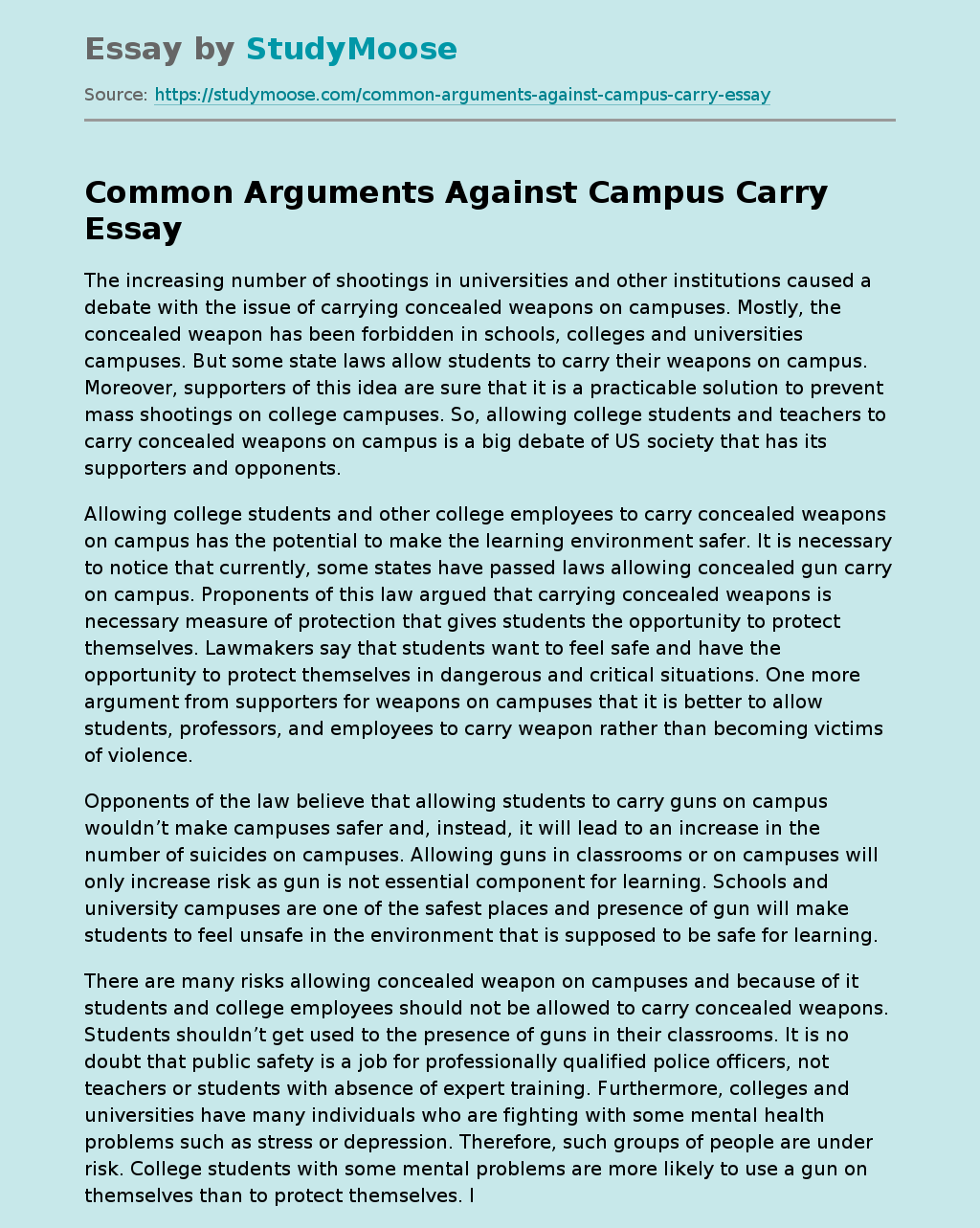