An effective advertisement appeals to the consumer. It should be able to capture and influence their perception of a product. This document evaluates a McDonald’s franchise advertisement and its effectiveness where it is able to capture the efficient working spirit in the staff and consequently the overall high service delivery to the customers. The various aspects that facilitate the effectiveness in the advert will be highlighted.

The advert begins with the opening of a McDonald’s outlet early in the morning.

Don't use plagiarized sources. Get your custom essay on
“ Commercial. An effective advertisement ”
Get custom paper
NEW! smart matching with writer

One is able to deduce it is the morning since there is the scene of a rising sun and a clock reading six. The staff can be seen readying themselves to get into action. One’s curiosity is aroused as to what they are up to and then the action begins which in this case is the preparation of the various food products. The notable foods in the beginning include coffee and eggs which make one deduce that they are preparing breakfast.

The action continues to increase with the next scenes showing the workers now in full swing each attending to their various tasks. Different foods can be seen and heard sizzling in their preparation areas as well as the cranking of the preparation utensils such as the deep frying grill. The various items being prepared include the foods McDonald’s is renowned for which in this case include fries and burger meat. After preparation of the food, the workers then package the various foods.

One is able to guess they are the different orders made by the customers. The orders are packed in trolleys to be taken to the counter and delivered to the customers. From packaging the scene changes to the counter where one can see a line of pay points each being manned by a staff. The staff can be seen executing the various orders in this case keying them into the cash registers. The customers then get served with their different orders and they can be seen enjoying. The staff action around the outlet continues up to the nighttime with customers coming in and going until closing time which is symbolized by a background of lights going out in a big city.

Apart from being attracted to the frenzy of activity by the staff in the advert, one cannot miss other appealing aspects in this case the background music and the colors. All the action takes place with some instrumental background music. One is able to associate the same with the McDonalds’ stores. In the colors, McDonald’s stores use the red and yellow colors as their theme. The same has been well blended and distributed in the advert. The staff’s black uniform makes it hard for one to miss the yellow and red logo of the McDonald’s. The packaging of the foods also takes place in the famed McDonald’s red and yellow package boxes.

With all the staff action, one is able to see that the advert clearly shows the product being advertised in this case the McDonald’s food outlets. The product is prominent in the ad as one is able to identify and see the various foods offered by the outlet such as burgers, fries, hamburgers, drinks such as coffee and ice-cream in their different stages such as preparation, packaging and even their consumption.

The target market audience for the advert is the general population as one is able to see the children, the youth and the old enjoying the various foods offered in the outlet with the effective service of the staff. With the kind of business the McDonald franchise transact, in this case a food related one, one is able to identify the target market as the general population since food appeals to all. The customers’ base varies in this case the old, the young, the youth and the middle aged. The actors in the ad include people of different ages in this case the young, the middle aged and the old. The use of the same is significant in that the outlet wants to create an appeal to the different age groups seeing that food is a common aspect in all of them.

Evaluating the ad and the objects in it, the ads duration is 54 seconds in which time I felt that it was effectively managed in sending out the intended message to the intended audience. With an ad, the main object being marketed should be well displayed throughout the ad. The same is effectively utilized with the objects in the ad depicting McDonald products and the effective service accompanying the same. For the product, there is a big McDonald’s sign at the opening seen of the ad, the clearly visible logos in the staff uniform, the foods being prepared, the use of McDonald’s theme colors in the packaging and the closing scene with a McDonald sign outside an outlet. For the service, the staff can be seen in their various work stations efficiently carrying out their tasks.

I felt that the ad was able to effectively reach out to the intended audience. This is because the ad is able to focus on the specific product they want to market in this case McDonald’s food outlets in the hands of an effective staff. The execution of the same is carried out in a way that it is systematic as all the actions follow each other consequently. The opening of the outlets, the food preparation, the packaging and the consumption are actions that are able to appeal to one to try out the product in such a well-managed setting. 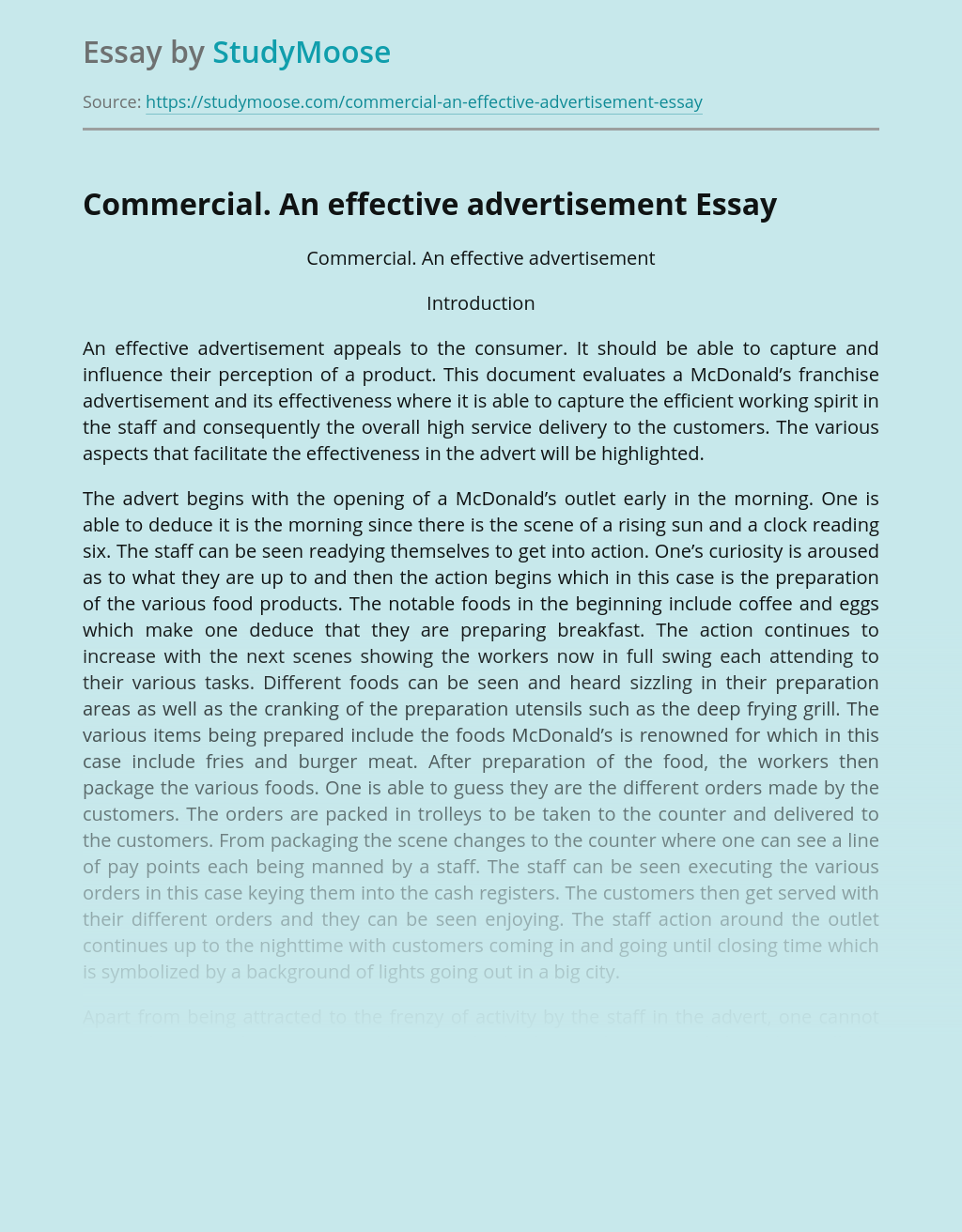