Proliferation of Containers and Its Effects on the Commercial

The proliferation of containers has now taken hold of our localities also to the extent that some see it as sort of a menace. This study takes into consideration the reasons for this phenomenon and its possible impact on commercial (retail) real estate development in the Wa municipality in the Upper West region of Ghana. The motives behind the use of these temporary structures in place of built space and the possible impact on retail real estate space market is what this study seeks to find.

Don't use plagiarized sources. Get your custom essay on
“ Proliferation of Containers and Its Effects on the Commercial ”
Get custom paper
NEW! smart matching with writer

Container buildings fall under the family of prefabricated (temporary) structures and there is the need for this study to assess the impact it has had so far on normal buildings (if any). Data was taken from 100 container and permanent structure users, some land owners and the TCPD in the WMA.

At the end of the study it was revealed that, retail space in Wa is lagging behind demand. This is because most respondents searched for built retail shops but find it hard to come by getting some.

Again the total cost involved in putting up a permanent structure is far expensive than that of a container.

The study recommended that, developers must be able to find out ways to develop more retail space and TCPD must give specifications on the containers to be used. Much elaborations should be given on the size, height, colour, etc. of containers to be sited.

Background to the study

Ghana’s population has been on a drastic after independence.

According to the Ghana Statistical Services (2005), “Ghana’s population of just over 2 million in 1921 increased to about 6.7 million in 1960 and 8.6 million in 1970; it thus more than tripled in a short period of nearly fifty years (i.e. 1921-1970). Although data for the early part of the 20th century are not reliable, they are, indicative of a rapid increase in the country’s population”. This phenomenon naturally drives the country’s economic activities up. Government policies have been made to take advantage of the rise in these economic activities positively for the ever increasing population (Kwankye and Cofie, 2015). This calls for the need of retail space by merchants who engage in the country’s commercial activities.

In other words, more space is needed by these merchants to satisfy the increased population as it is proportionate to the market, so urban areas like Accra, has varieties of available spaces being let for commercial purposes ranging from properly built office spaces and shops to improvised commercial spaces (containers). Containers (as they are generally referred to) are fundamentally used as a means of packaging shipped goods to and fro. These were invented by an American business man called Malcolm McLean in the 1950’s to make shipping of goods oversees convenient (Bonney, 2001). With this idea, the US military used this method to send supplies to their military bases during the Vietnam war, furthermore, they started using the containers as temporary offices because it was available and convenient after its primary use. But that did not actually commenced its usage in terms of architecture until Phillip C. Clark came on the scene with a patent in 1987. “On November 23, 1987, Phillip C. Clark filed for a United States patent described as a “Method for converting one or more steel shipping containers into a habitable building at a building site and the product thereof.” This patent, number 4854094, was granted on August 8, 1989 and the information and diagrams it contained were used as the basis for many shipping container architectural concepts” (Pagnota, 2011). This opened the door to a new revolution in the container world called “container architecture”.

Many reasons were then given by various individuals from all walks of life pertaining to its utilisation in such manner. Some say it is convenient, cheap, durable etc, but is it really true? As it stands, everyone has different views when it comes to the usage of a container in place of built shops. But then again, even if there is a noble reason for its usage it is bound to bring some shortcomings and does the good it brings outweighs the bad? Ghana’s steel industry is dominated by the production of iron rods and steel coils with the manufacturing process mainly done by a hot rolling process of converting scrap metals and billets into iron rods, coils and steel balls for the construction, mining and allied industries (Ohene, 2019). The iron sheet required by welders from shop owners is mostly also derived from these scrap materials being converted into sheets and thereafter moulded or shaped into desirable sizes of containers.

In spite of the benefits associated with recycling scrap metals, some negative repercussions also pertain at different stages in the industry. Kimani, (2007) argued that heavy metals may be released into the environment from metal smelting and refining industries, scrap metal, and from the burning of waste containing these elements. Even, as our environment is being rid of scrap metal waste, we yet face another negative impact due to processing of these metal scraps which would later be made into iron sheets for moulding container, also having its negative effects on the environment. But this study is not focused on the dangers posed by the processing of the metal scrap to the environment but on the dangers posed by their end product as containers.

Ghana, on the other hand was not left out when it comes to the usage of these containers as commercial spaces, and this has been on the rise in recent years making our urban areas chocked with containers as shops. The proliferation of containers has now taken hold of our localities also to the extent that some see it as sort of a menace. This study takes into consideration the reasons for this phenomenon and its possible impact on commercial (retail) real estate development in the Wa municipality in the Upper West region of Ghana. The motives behind the use of these temporary structures in place of built space and the possible impact on retail real estate space market is what this study seeks to find.

Winston Churchill, former British prime minister delivering a speech in 1943 said “On the night of May 10, 1941, with one of the last bombs of the last serious raid, our House of Commons was destroyed by the violence of the enemy, and we have now to consider whether we should build it up again, and how, and when. We shape our buildings, and afterwards our buildings shape us. Having dwelt and served for more than forty years in the late Chamber, and having derived very great pleasure and advantage therefrom, I, naturally, should like to see it restored in all essentials to its old form, convenience and dignity.” (Stringer, 2015). According to Churchil, “We shape our buildings, and afterwards our buildings shape us.” Ideally, our streets and neighbourhoods are supposed to be filled with regulated built space for both residential and commercial activities. Simply by observing our rural and urban communities, the case does not seem to be so. One can easily tell the difference between a well planned and unplanned communities. Architecture (and real estate generally), as a human product, should order and improve people’s relations with the built environment (Norberg-Schulz, 1965).

However, in Ghana, most of our cases are not like how it should be. In a Joy News report on the Kumasi flood, it was reported that “According to Ashanti Regional Coordinator of NADMO, Kwabena Senkyere, the failure of the Assembly to regulate where structures like containers are placed is compounding the already insurmountable challenges facing the city’s planning system” (Donkor, 2018). This report suggests that the proliferation of these containers is becoming a disadvantage to our existence. The haphazard siting of these containers is becoming a menace to the government and the citizens at large. A lot of these containers are marked “stop work produce permit” or “demolish by order” or “remove now” by local government authorities, simply implying that, such structures are

Proliferation of Containers and Its Effects on the Commercial. (2019, Dec 19). Retrieved from https://studymoose.com/proliferation-of-containers-and-its-effects-on-the-commercial-example-essay 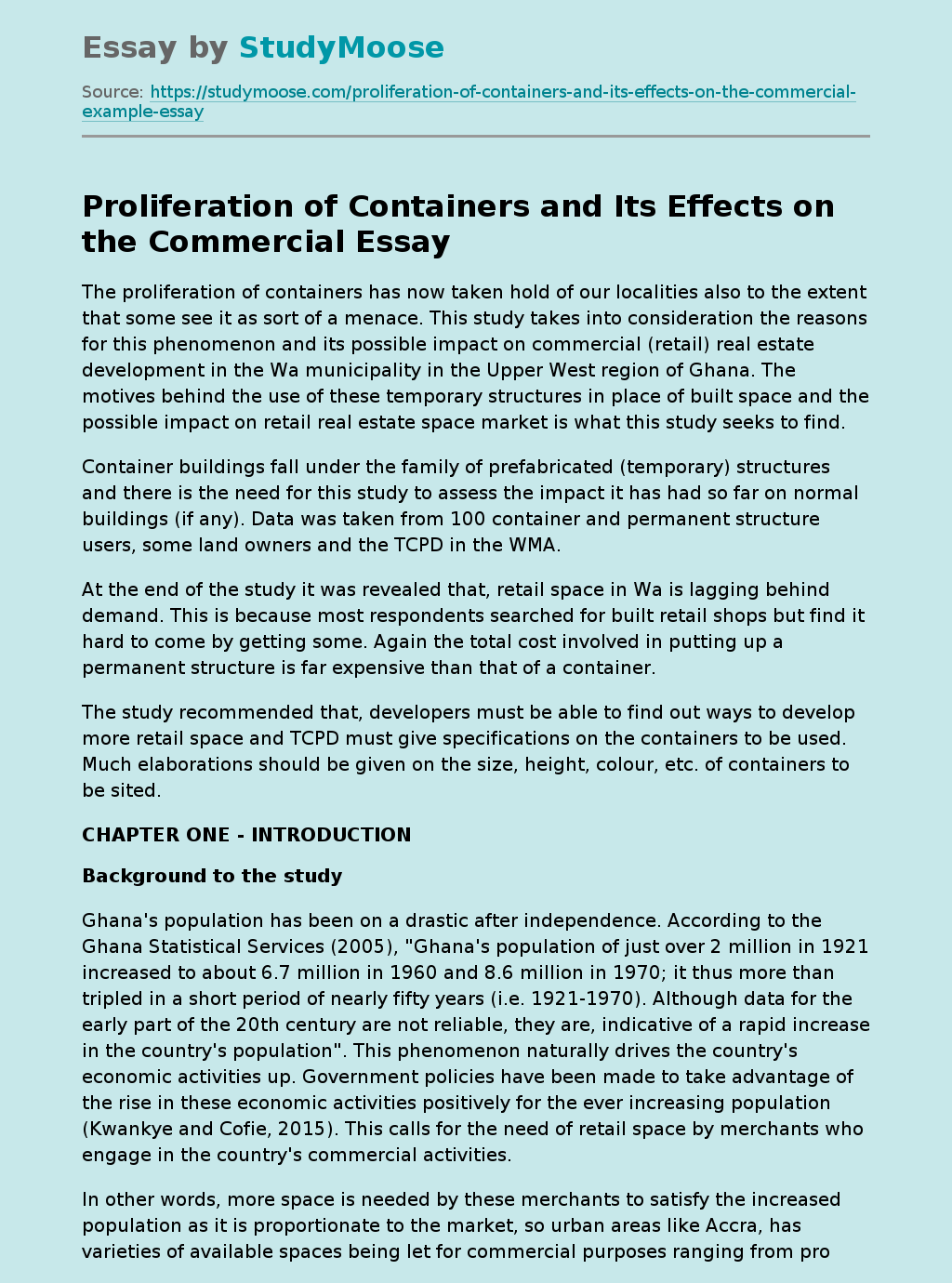