Commercial Airlines can be divided into categories that describe their key operational characteristics. These include Low Cost, Regional, Full Service and Charter Carriers.

This type of airline maintains a low cost base by offering a minimal service in exchange for low fares. Such airlines have a small workforce and may contract external companies for aircraft maintenance and ground handling. Sales are made via internet and telephone thereby eliminating travel agent commission and the cost of ticket production, distribution and reconciliation.

Don't use plagiarized sources. Get your custom essay on
“ Air Transportation by Commercial Airlines ”
Get custom paper
NEW! smart matching with writer

Instead a code is issued to the customer and then requested upon checking in. Low cost airlines may undertake extensive marketing to stand out amongst the competition. Low cost carriers operate frequent and scheduled short haul services where aircraft utilisation is intensive due to short turn around times. An example low cost airline is Easyjet that was founded by Stelios Haji-Loannou. The company employs less than 3500 staff and operate 67 Boeing 737 and 5 Airbus 319 aircraft.

Easyjet do not offer in flight meals and have negotiated competitive airport rates in order to reduce operating costs.

They made great investments in marketing and successfully advertise with orange street notice boards. Easyjet are based at Luton airport and operate 127 routes to 39 airports in Europe with load factors of 77%, often using secondary airports which are less expensive.

This type of airline focuses upon short to medium haul routes which average at 524km and 57% of passengers are business customers. Operations range from Spoke airports (Norwich) to Hub airports (Heathrow) and may include feeder airlines that ally with other airlines to offer connecting flights between Hub and Spoke airports, which maximise passenger numbers and benefit customers.

Fleets usually consist of small turboprop and jet aircraft that have an average capacity of 67 seats. Sales are made via travel agents or internet and telephone and may or may not involve tickets.

Regional airlines operate scheduled services and overall aircraft utilisation is non intensive due to the need to position aircraft for times of peak demand. This may involve leaving aircraft at an airport overnight in order to serve the early morning business traffic. An example regional airline is Air Wales which was founded by Roy Thomas in 1999. The company has a fleet of 2 ATR 42 aircraft and offer passengers direct and fast transport between 9 cities in the UK and north-west Europe. The company is based at Pembrey Airport in Wales and has a call centre in Swansea.

This type of airline offers traditional services enhanced by a range of in flight and ground services such as specialist classes and services. These include entertainment lounges and in flight meals that are customer focused and create a high cost base. Such airlines operate a large fleet of aircraft mainly from Hub airports, with many frequent and scheduled flights to a range of destinations. They may provide integrated medium and long haul services that involve connection flights between Hub and Spoke airports.

Long haul feeding connections. Full Service airlines may position aircraft at an airport overnight in order to serve the early morning business traffic. Most sales are conducted via travel agents and tour operators and involve tickets. An example full service airline is Virgin Atlantic which was founded by Sir Richard Branson in 1984. The company is based at Heathrow and Gatwick airports and operates long haul services with a fleet of 15 Airbus 340 and 12 Boeing 747 aircraft.

The airline offers passengers upper class with specialist entertainment that is better value than first class in other airlines. This includes the seat that converts to a flat bed and the in flight and ground based lounges offering food and wine. Charter Carriers – Air 2000 This type of Airline offers services to leisure destinations and is often associated with tour operators and package holiday deals. Flights are not scheduled but operate to a program based upon minimal flight times between base and destination airports.

Charter airlines are subject to the laws of the country being served and aircraft capacity will have been sold to the airline and its associates for resale. Charter airlines tend to have the most passengers during Holiday periods and most flights are made over the weekend. Aircraft utilisation is intense with minimal turn around times and aircraft are often transferred around the world to the most prosperous locations for business. This may involve moving aircraft between the Northern and Southern Hemisphere to escape the Seasons.

Aircraft may also be leased for cargo transport or on an Ad Hoc basis where the aircraft is made available for private hire to businesses and sports teams etc. An example charter airline is Air 2000 which is associated with First Choice Holidays and was launched on 11th April 1987. The airline operates 3 Boeing 767, 15 Boeing 757, 6 Airbus 320 and 6 Airbus 321 aircraft from 15 airports in the UK and Ireland to over 50 destinations around the world. The airline offers in flight meals and entertainment such as videos, music and newspapers.

However regional airlines operate short haul routes with fairly minimal services whereas full service airlines operate a range of medium to long haul services with specialist entertainment services. Although airlines can sorted into the above categories, each airline is unique and although there may be patterns, many airlines show characteristics that overlap these categories. It is also important to note that air travel is still a very young business in which airlines are constantly changing, which can make defining these categories difficult. 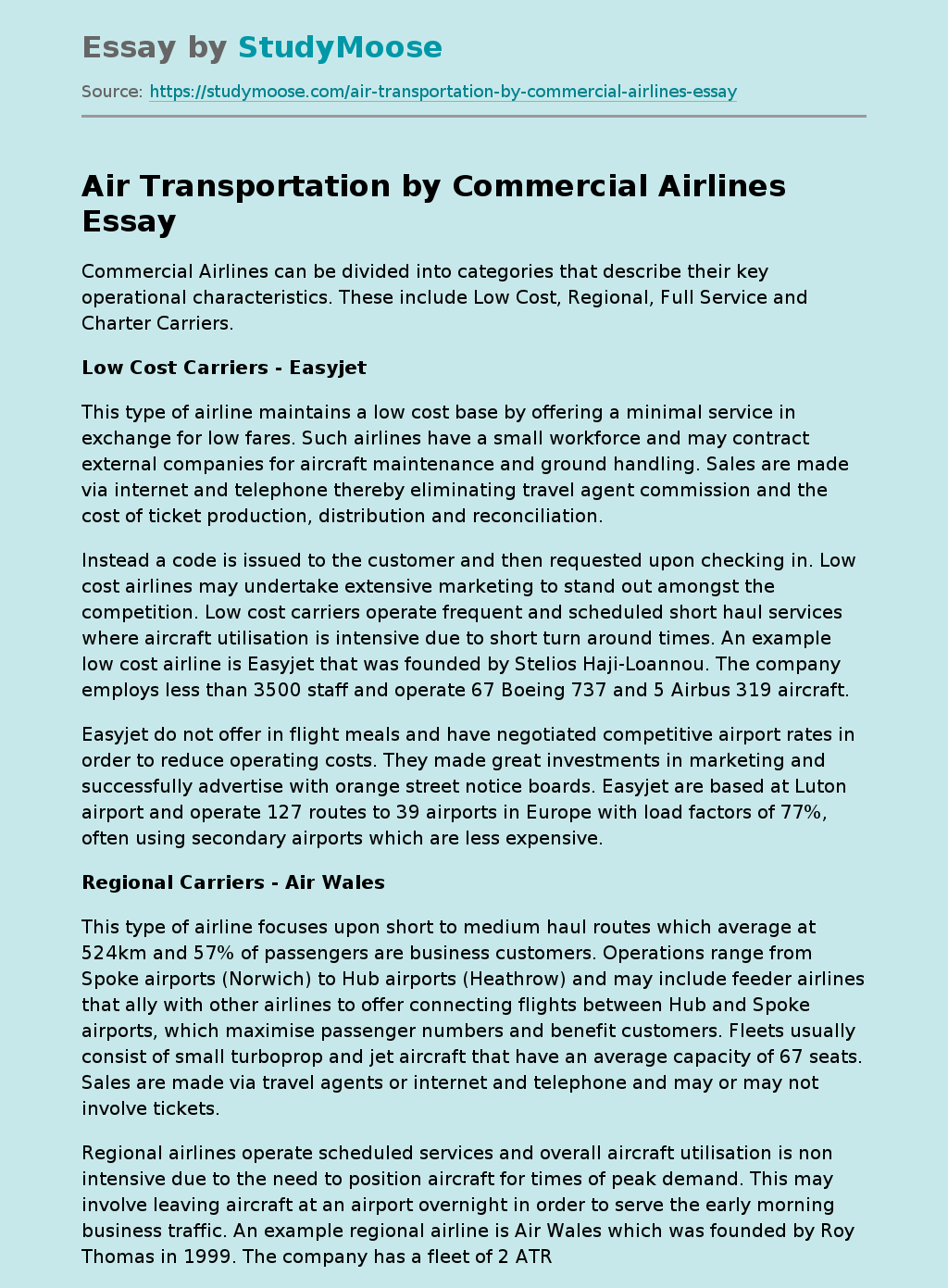