Theme can be described as the overall meaning of the story. In some stories, the theme can be pointed out easily. In others stories sometimes the theme is not so easy to determine. A story can consist of more than one theme. In ‘America’ by Claude McKay and ‘I was in a Hurry’ by Dunya Mikhail the theme they share is don’t give up hope or faith through what you are going through. Both writers talked a little about when they moved here, but also a little look back on their past country.

Don't use plagiarized sources. Get your custom essay on
“ Claude McKay ”
Get custom paper
NEW! smart matching with writer

In ‘America’ by Claude McKay, the poem starts with him being frustrated with America. Towards the end of the poem, he becomes less frustrated with America. He realizes it is not so terrible. Claude shows some of the good, bad, and ugly in the poem. The poem is about how blacks at this time were being treated. He used lots of figurative language through ‘America.’ Using figurative language made his poem draw more interest to readers.

Some personification is shown in the poem, because he referred to ‘America’ as she. He begins ‘America’ with a spiteful and upset tone, but the tone changes with the hope he has for ‘America.’ Claude was born in Jamaica. In Jamaica, he is known for his writing. He was also part of the Harlem Renaissance. In Jamaica, he experienced lots of racism and moved to another part of Jamaica.

Soon after he became interested in communism and traveled to Russia, but later came back to New York.

After traveling back to New York, he converted to the Catholic religion. Claude’s childhood and trials throughout his life encouraged him to write ‘America.’ He learned throughout his journey not to give up hope or faith no matter what you go through. Claude faced many fights through life, but knew not to give up. One thing the poem brings out to me is that, being an african american can be challenging, but he wanted to work hard to make a better life for himself. At the beginning, he shows spitefulness by saying ‘America’ is ‘sinking her tiger tooth into his throat.’ In the middle, he begin to realize he did not need to despite America by saying ‘Giving me strength erect against her hate.’ McKay realized America wasn’t all that bad. Claude said ‘I will confess I love this cultured hell that tests my youth.’

In ‘I was in a Hurry’ by Dunya Mikhail, Dunya wrote this one year after leaving Iraq. She fled her homeland, a couple years after the end of the first Gulf war. She was being questioned by the Saddam Hussein government. She was questioned mostly about her media, writing, and poetry. The government had named her poetry ‘subversive.’ She had to do her writing in disguised, so that the government could not understand it. Dunya escaped and finally reached the US. After moving to the United States, she got married, had her first child, and eventually became a United States citizen. She never returned to her homeland, but revisits it by writing in her poetry about it. In ‘I was in a Hurry,’ Dunya writes about how she lost her country yesterday.

In conclusion, although both writers may have had a hard past, they continued to fight through for what they wanted. There was many struggles, trails, and things that could have stopped them, but they choose not to let that get in the way. They were able to see the good or bad in situations, then take those things and put them into writing to share their journey. They did not lost their faith to become who they wanted to be. This is a good example of how not giving up will always lead you to better if you keep trying. 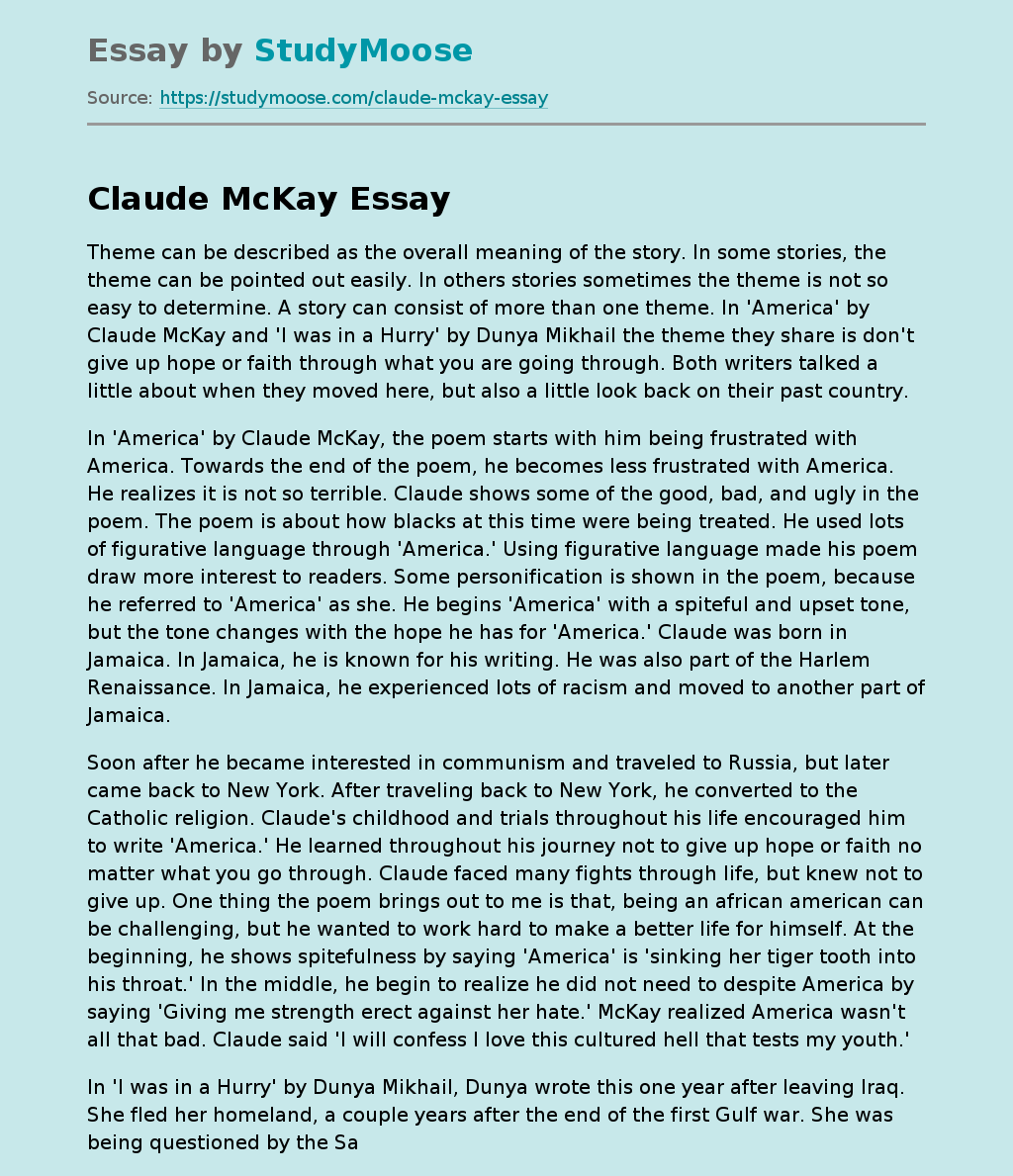