Class and Gender in Jane Eyre

In the 19th century, the society Jane Eyre is based upon, wealth and status were considered first. This Victorian era in the British History, was the period of Industrial revolution. During this period class and gender were mostly on foreground. It was women who faced more problems than men from these cultural-norms. Charlotte Bronte’s Jane Eyre focus on the Protagonist’s struggle against these oppressions throughout her life. This novel shows Jane’s strong character, her will and desire for equality.

Don't use plagiarized sources. Get your custom essay on
“  Class and Gender in Jane Eyre  ”
Get custom paper
NEW! smart matching with writer

This novel also questions the position and roles of women in the Victorian era and highlights the cruel reality of English society. This paper aims to show the Protagonist’s struggle and accomplishments by examining her class status and her journey throughout the novel.

Throughout the Jane Eyre, the protagonist is placed in an arguable class position. We can see her travelling each spectrum of class status, from middle class family to being homeless and then upper class. We can see the class struggle from the very beginning of the novel when the orphan jane goes to live with the Reeds at Gateshead.

The Reed Family is the upper-class family and Jane being a lower-class orphan because of her father’s low born status. Her ambiguous class status was inherited from her parents as later in the novel we learn that her father, a poor clergyman, married a middle-class woman, Jane’s mother. Her mother marrying a person from a lower class, which lowered her status she was born into.

Mrs. Reed treats Jane as below herself and her children.

Mrs. Reed has three children: John, Eliza and Georgina among whom John hates Jane the most and beat her up. John says to her, “You are a dependent, mama says; you have no money; your father left you none; you ought to beg, and not to live here with gentlemen’s children like us, and eat the same meals we do, and wear clothes at our mama’s expense. Now, I’ll teach you to rummage my book-shelves: for they are mine; all the house belongs to me, or will do in a few years” (Brontë, 2003; 7-8). These words by John show Jane’s lower-class position. He calls her “bad animal” and is treated with cruelty and is often beaten and locked in room where her uncle Mr. Reed died. She is treated even less than a servant.

Even Miss Abbot, a servant, tell Jane that she, “ought not to think of herself on an equality with the Misses Reed and Master Reed because…they will have a great deal of money and you will have none.” The servant says: “What shocking conduct, Miss Eyre, to strike a young gentleman, your benefactresses’ son! Your young master!” Jane replies: “Master! How is he my master? Am I a servant?” The servant says: “No; you are less than a servant, for you do nothing for your keep…” (Brontë, 2003; 7). John being male although young gives him a gender power to harass Jane. Jane understand the fact that John being male although young gives him all the rights to be cruel and dominating. Instead of accepting her role in the Reed family she accepts going to the Lowood School, which is a boarding school for orphan lower-class children.

At Lowood, girls were starved and abused. Despite all the harsh and cruel behavior at the Lowood, Jane favors the working class and say, “If people were always kind and obedient to those who are cruel and unjust, the wicked people would have it all their own way; they would grow worse and worse. When we are struck at without a reason, we should strike back again very hard…”. She questions the charitable school who prejudice against lower-class girls to make them aware of their class and gender boundaries in the Victorian society. Many years later, Jane becomes a teacher at the Lowood and now she is an educated woman. She made a progress in the class ladder. She tells: “In a few weeks I was promoted to a higher-class; in less than two months I was allowed to commence French and drawing. I learned the first two tenses of the verb Etre and sketched my first cottage…I would not now have exchanged Lowood with all its privations, for Gateshead and its daily luxuries” (Brontë, 2003; 87).

As Jane is now educated and middle-class woman, she could find a job as a governess and shifted up her class and we saw a rebellious and a woman of strong character in her as she opposed the world which demands the obedience and voiceless from her sex. Jane gets a job as a Governess at Thornfield, “I’m the governess” (Brontë,2003; 116). Working as a Governess at Thornfield was like another class shift in Jane’s life. From being lower-class orphan to an educated, respectful women at Thornfield really turned her from poverty to a better life. She started living at Mr. Rochester’s house, as he was the master of the household and an upper-class wealthy man, even as a Governess Jane was supposed to show respect. Mr. Rochester treated Jane like a servant, and she compares herself with another servant Mrs. Fairfax, “The equality between her and me was real…my position was all the freer” (Brontë, 2003; 87).

She is happy that she doesn’t fall at the bottom of the class ladder because of the servants. The class and gender boundaries bother her, and she feel trapped even in Thornfield, she left Lowood in the hope that she would start new life but still she feels burdened by the upper-class people. “Women are supposed to be very calm generally: but women feel just as men feel; they need exercise for their faculties, and a field for their efforts as much as their brothers do; they suffer from too rigid a restraint, too absolute a stagnation, precisely as men would suffer; and it is narrow-minded in their more privileged fellow-creatures to say that they ought to confine themselves to making puddings and knitting stockings, to playing on the piano and embroidering bags. It is thoughtless to condemn them, or laugh at them, if they seek to do more or learn more than custom has pronounced necessary for their sex.” (Brontë, 2003; 101).

In above quotes Jane raises the issue of Victorian patriarchal society which argue that men and women are not equal and where the only callings for the women were marriage and child bearing. She continuously assures the readers that she is “a free human being with an independent will.” The bond between Mr. Rochester and Jane become stronger. There she meets Miss Ingram, a beautiful upper-class woman, who just wanted to marry Mr. Rochester for his wealth. Jane and Miss Ingram definitely have class difference and Miss Ingram tries to humiliate Jane. But she thinks, “She was not good; she was not original: she used to repeat sounding phrases from books: she never offered, nor had, an opinion of her own” (Brontë, 2003; 162).

Jane thinks that her morals and self-respect make her superior of Miss Ingram. Because Jane’s ambition is “to save money enough out of my earnings to set up a school some day in a little house rented by myself” (Brontë, 2003; 173). She sincerely loves Mr. Rochester and attracted him with her beautiful soul. “I need not to sell my soul to buy bliss. I have an inward treasure born with me, which can keep me alive all extraneous delights should be withheld or offered only at a price I cannot afford to give” (Brontë, 2003; 203). She doesn’t want to overcome the class barrier with Mr. Rochester by sexually attracting him, she decides to conserve her self-respect. The class difference became an obstacle in their relationship and Jane suppresses her feelings towards Mr. Rochester because the class-based society will dislike the relation of a Governess and a wealthy man. When Mr. Rochester makes Jane jealous by announcing his marriage with Blanche Ingram and that Jane will work with other servants, she speaks, ““Do you think, because I am poor, obscure, plain, and little, I am soulless and heartless? You think wrong! …I have as much soul as you, …and full as much heart!….and we stood at God’s feet, equal, – as we are” (Brontë,2003; 256).

She raises her voice against treating her low and expresses herself as a strong independent woman and equal to them. Marriage proposal of St. John to Jane was followed by arguments between them regarding gender roles. He had a strict view and religious expedition on gender roles and women behavior. Jane rejects his proposal of marriage and, “as a man, he would have wished to coerce me into obedience: it was only as a sincere Christian he… allowed so long a space for repentance and reflection.” It is quite clear that in Victorian era there were strict guidelines for what was allowed to women at that time.

In conclusion, Jane is described as a rebellious and fights against the biased social norms on class and gender. She challenges the protocol of the 19th century period and encouraged other women to strive for more. She is seen achieving the class equality at the end of the novel, by starting her life at Gateshead as a lower-class orphan and then to Lowood, then shifting the class dynamic to middle-class at Thornfield as a governess and lastly being upper-class woman due to her uncle’s inheritance. She climbs the class ladder by overcoming the Victorian gender boundaries and cruel class system.

Class and Gender in Jane Eyre . (2021, Apr 26). Retrieved from http://studymoose.com/class-and-gender-in-jane-eyre-essay 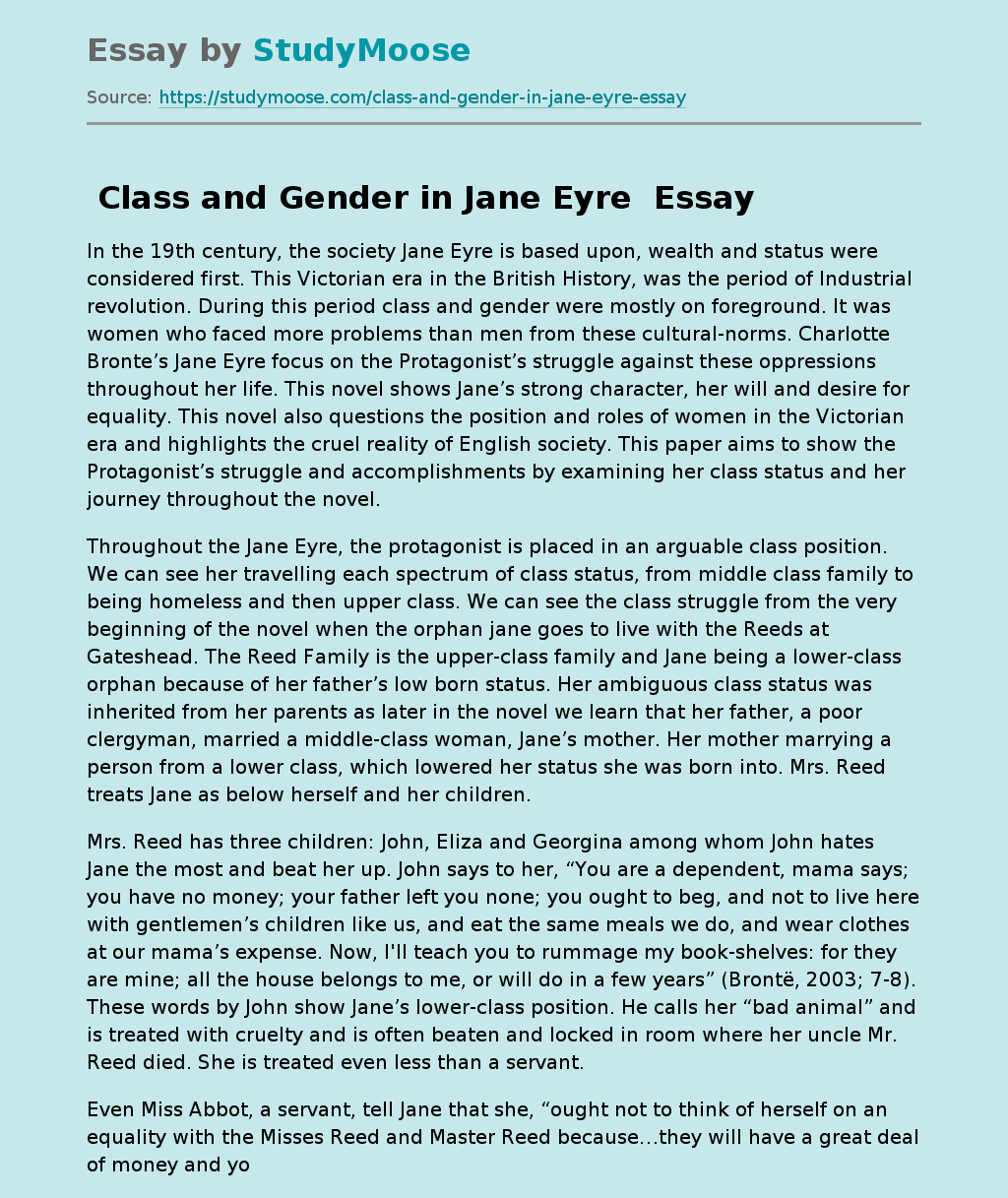