Martin Luther King Jr.’s “I Have a Dream” speech focuses on the importance of freedom and brotherhood in a nation and is intended to rally Americans to demonstrate their anger at the injustices of segregation and racism through “creative protest.” While King’s passion and anger at the status quo is obvious in the text, he specifically states that they “must not allow [their] [protest] to degenerate into physical violence.” He is pushing for defiance against the government. Antigone exhibits the same kind of defiance when she goes against Creon’s law and completes her brother’s burial rites.

Don't use plagiarized sources.
Get Your Custom Essay on Civil Disobedience and Antigone Just from $13,9/Page

Antigone, like Martin Luther King Jr., was faced with conflicting obligations; the obligation of a citizen to follow the law, and personal obligation to fight what one feels is wrong.

A theme appears in both texts that one’s morals are more important than the law of the land. Antigone sacrificed her life to complete what she felt needed to be completed based on her religious beliefs.

King dedicated his life to obtaining freedom for black people in America and was eventually killed for what he believed in, linking the two. If Sophocles and Martin Luther King Jr. were to have a conversation, the two would most certainly agree on some things. Both would agree that one must follow their heart and fight things they feel must be changed. They would agree that one must not stand idly by as injustice takes place, such as segregation or the body of one’s brother left to rot above the ground. While Antigone is not a central figure in a civil rights movement, she does exhibit civil disobedience, bridging the “I Have a Dream” speech and Antigone. 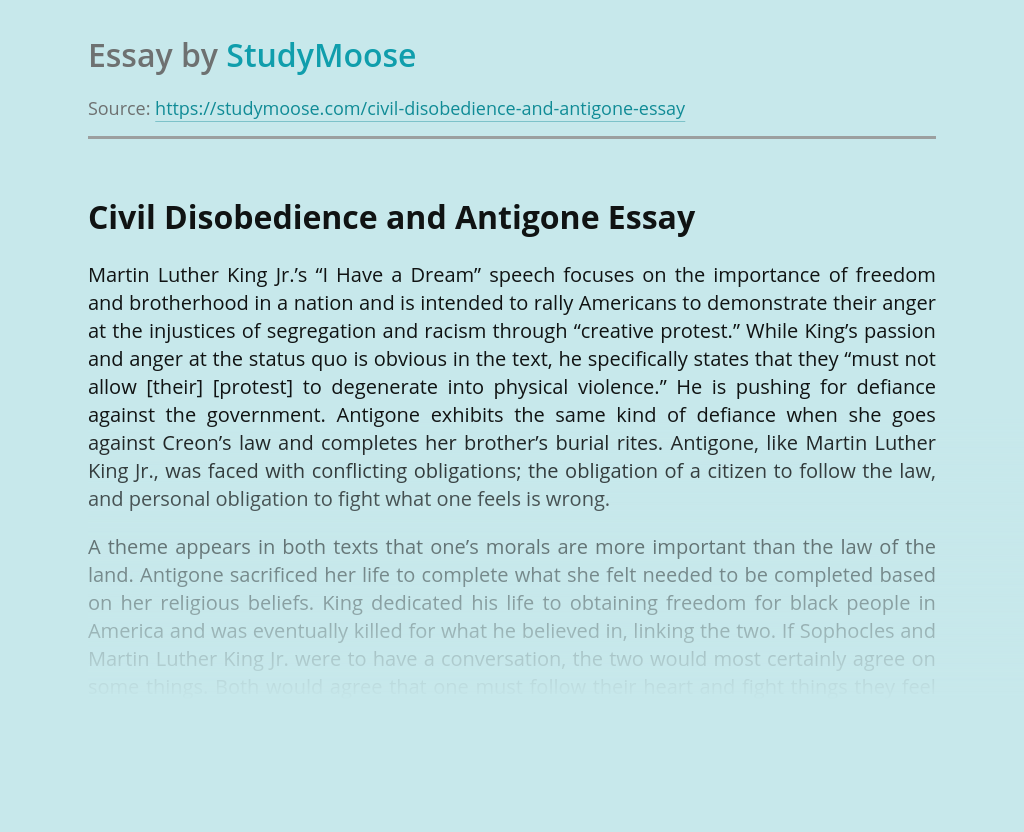 Caring for gods creation is hard work, and our culture mentality of “I do what’s best for me” completely opposes it. We are bombarded with messages and advertisements telling us to make life easier and more convenient, and our own selfishness tendencies tell us “no one else is doing it” and “my contribution really won’t...

Mayella Ewell is a dichotomous person because she is like any other girl that wants to fit in. The one that wants to be something she’s not. She wants to be beautiful, accepted, have friends. She is tired of people thinking she’s dirty or feeling unwanted, like an outsider. She’s alone in a big room...

What will your outlook towards maintenance of liquid assets to ensure that the firm has adequate cash in hand to meet its obligations at all times? Almost every action of company has financial implications, manager responsible for or with oversight of cash flow get directly involved in many functional areas of the business. Cash flow...

Patricia Chanco Evangelista is a debater, TV show host, columnist, segment producer, product endorser and leader. As a 19 year-old student, she became the first Filipina to win the Best Speaker award in the International Public Speaking Competition – an annual contest sponsored by the English-Speaking Union held in London. Her speech entitled Blonde and...