“Cinderella” by Charles Perrault and “Ashputtle” by the Grimm Brothers

“Fairytales are unique, not only as a form of literature, but as works of art which are fully comprehensible to the child as no other form of art is. ” we were introduced several versions of Cinderella in “Damsels in Distress”. For generations, the Cinderella story had been one of the most popular fairytales around the world; there are countless modified versions of it. For this analysis, I chose “Cinderella” by Charles Perrault and “Ashputtle” by the Grimm Brothers and applying them to the ideas from the article, “The Struggle for Meaning”.

Don't use plagiarized sources. Get your custom essay on
“ “Cinderella” by Charles Perrault and “Ashputtle” by the Grimm Brothers ”
Get custom paper
NEW! smart matching with writer

The most familiar version of “Cinderella” in western society was the written by Charles Perrault in 1667, it was then later used by Disney for a children’s film production. The Grimm Bothers’ modified version of the story is mainly based on Perrault’s version with a little twist in it. In general, both of the stories share a similar story-line. A widower with his daughter (Cinderella or Ashputtle) was remarried to a “stuck-up” woman and her two daughters.

The man’s daughter are Cinderella or Ashputtle, they were named by their stepsisters, and have been treated poorly by their stepsisters. It happened that the King of the kingdom had a son who was anxious to get married; so he gave a ball, and invited all the ladies in the kingdom to go to it. Cinderella (or Ashputtle) was invited, but her evil stepsisters forced her not to go. Cinderella (Or Ashputtle) made a wish to go to the ball, and magic happened, it clothed her in a beautiful dress, but it will only last until midnight.

Ashputtle had the same moral but told in a different way, Karma will always strike back; Ashputtle’s sisters’ eyes were pecked out for treating Ashputtle poorly. “Many parents believe that only conscious reality or pleasant and wish fulfilling images should be presented to the child- that he should be exposed only to the sunny side of things. But such one-sided fare nourishes the mind only in one-sided way, and real life is not all sunny. ” In Bruno Bettelheim’s “The Struggle For Meaning”, Mr.

Bettelheim talked about how fairy tales can be so effective at grasping children’s minds into the ideas and morals of the fairy tales. “A child needs to understand what is going on within his conscious self so that he can also cope with that which goes on in his unconscious. ” Cinderella is a very “effective” story, just like children’s fantasy, the setting of the story is in a kingdom involved with kings and queens. The magic is a crucial part of the story of Cinderella; it turned the ordinary story into a fascinating fairytale.

Most fairytales gives the reader a straightforward message to the moral. This way, it allows younger audiences to relate to the main character or the hero of the story to him or herself to understand the story, “The more simple and straightforward a good character, the easier for a child to identify the hero from the villain. ” Ultimately, the message sent to the child from Cinderella is, “bad guys die, I don’t want to die, I want to be good. Another reason that fairytales are effective, “In fairytales, as in life, punishment or fear of it is only a limited deterrent to crime” “Deeper meaning resides in the fairy tales told to me in my childhood than in the truth that is taught by life” (The Piccolomini,III,4. ) Fairytales portray realistic views of human nature and struggles while incorporating enchanting fictional themes and characters, after all it’s this fictious fantasy sparks the reader’s interest, as they may find some valuable meanings of life from the tale.

“Cinderella” by Charles Perrault and “Ashputtle” by the Grimm Brothers. (2018, Sep 09). Retrieved from https://studymoose.com/cinderella-by-charles-perrault-and-ashputtle-by-the-grimm-brothers-essay 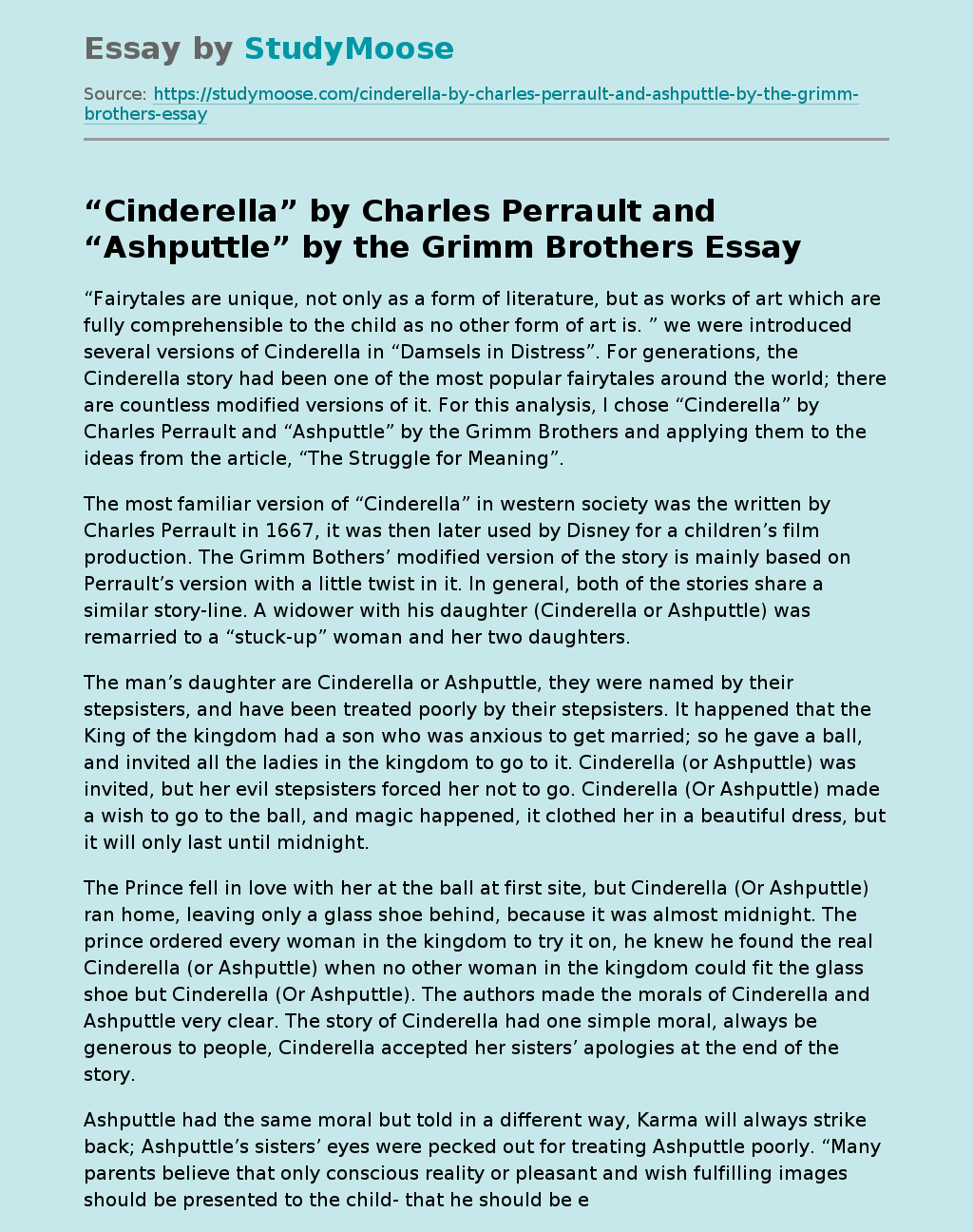