Chinese clothing is an important part of their culture. Although China no longer dresses in their older more traditional styles, the traditional garments are still worn for holidays and ceremonies. There have been many historical changes in Chinese clothing, and the Chinese style choices vary depending on what region is being scrutinized. Hanfu is a term that includes all traditional Chinese dress worn prior to Manchurian and western influences. All Chinese citizens living under the Ming dynasty, and many dynasties prior to it adopted this style of dress.

Don't use plagiarized sources.
Get Your Custom Essay on Chinese Dress Just from $13,9/Page

It was widely worn by all until the beginning of the seventeenth century and the start of the Quing dynasty. Hanfu, which was the widely accepted style in China for over three thousand years, consists of the Shenyi. A one-piece robe, which wraps around the body, the Shenyi is made up of different parts. The Jin, or the upper front of the body, the Jiaoling Youren, which means “crossed collars to the right” in Chinese and is the collar usually seen on the Hanfu of both men and women.

The collar is only tied to the left as burial dress.

The Qu and Mei are the cuffs and sleeves, and the Chang is the name of the skirt. The first recorded dynasty in China was the Shang dynasty. Although they did wear Hanfu clothing, most specifically the Shenyi, the garment worn by them was actually made of two separate pieces. The jacket, referred to as the Yi, and the skirt, or the Shang. It did not become a one-piece garment for many years. During the Shang dynasty the colors most often used for the garments were warm colors such as red and yellow.

As time moved forward the Chinese began to decorate the fabrics with red and yellow designs. Different regions of the country had different norms as far as Hanfu dress. During the Zhou dynasty the western people used different styles of the Hanfu Shangyi to differentiate between classes. The differences in classes are shown through the two styles of sleeves, the broad and the narrow, and the decorations that the wearer hung from his or her belt such as pieces of jade.

When the Quing dynasty took over, so did a new style of clothing. The Qipao was the traditional style for women and the Cheongsam was the style commonly worn by men. All Chinese were required to switch from the old Hanfu style of dressing or they would be killed due to the new rulers in place. The Qipao is a one-piece dress that traditionally fits loosely on the body and was designed to hide the woman’s figure. It is also sometimes referred to as the mandarin gown.

In the early nineteen hundred the Qipao was updated into the dress we recognize as traditional Chinese dress today. The close fitting dress with a high neckline is now often worn as a party dress and has been copied and worn by American women as well. The Cheongsam is the men’s version of the Qipao. It is a two-piece outfit made up of a pair of simple pants and a top with a high neckline extremely similar to that of the Qipao. The Cheongsam is traditionally made in the color black, and was the formal dress worn by Chinese men up until the introduction of the western-style suit. 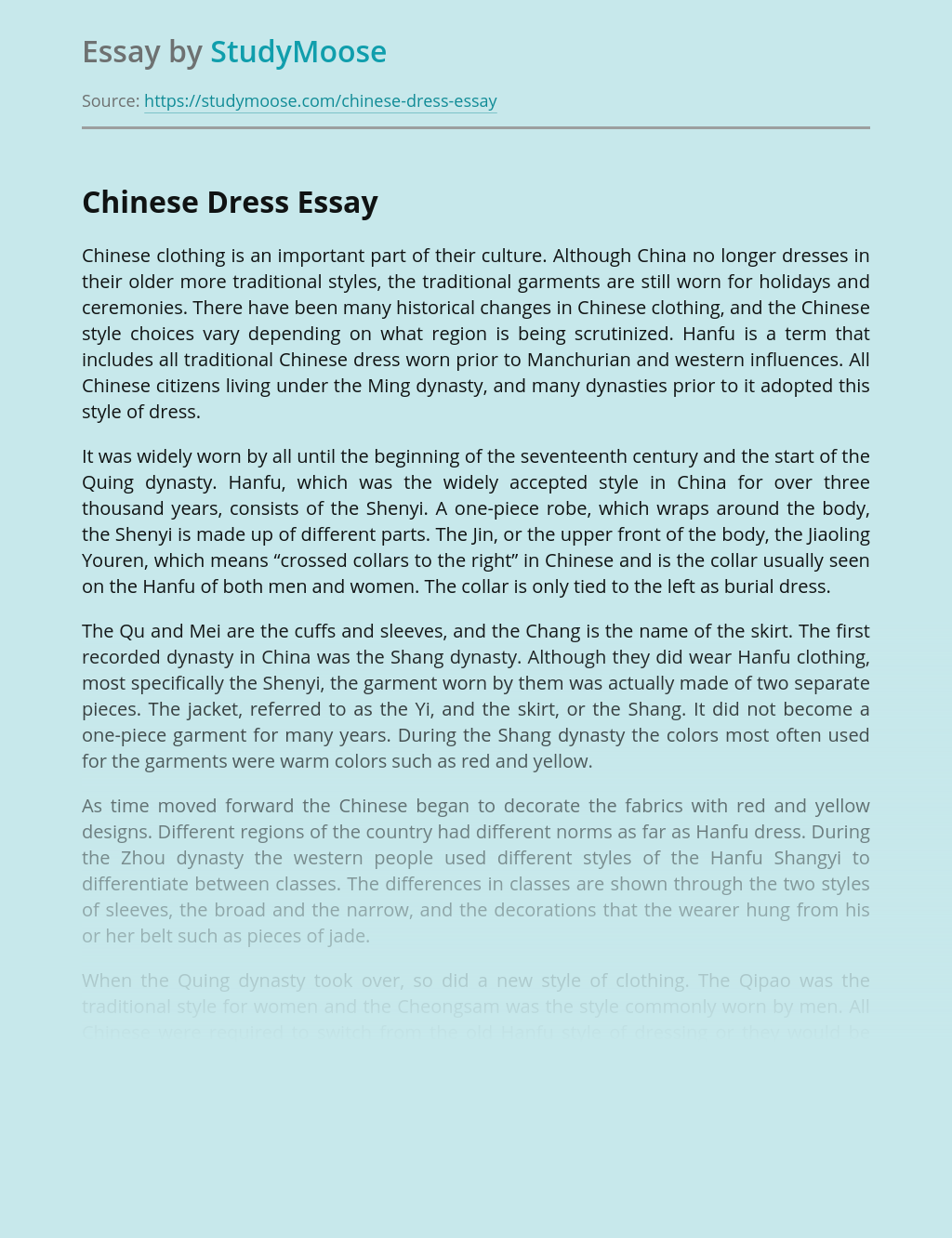 Comparison of the Chinese and American Cultures

Rate this post According to the Merriam-Webster dictionary, culture is defined as “the integrated pattern of human knowledge, belief and behavior that depends upon the capacity for learning and transmitting understanding to succeeding generations.” Culture is an element all groups of humans have and although it is an element our species shares, the supposed differences...

Get Essay
The Legend of Mulan: a Heroine of Ancient China

Rate this post Hua Mulan (花木蘭) was a famous heroine from ancient China. She camouflaged her sibling in order to take her father’s place in the army, bravely safeguarding her nation and gloriously returning house. Her story originates from a legend, which was passed down and retold over several years, so I still can’t choose...

Rate this post Mao travelled the length and breadth of China during the 1950’s. The massive amount of support that he got where ever he went convinced him that he was in touch with the people. He took this opportunity to give some greater freedom of expression to his people and he encouraged constructive criticism...

The Northern Expedition in China

Rate this post The Northern Expedition of 1926-1927 was a Chinese military operation that was staged by the communist party of China (CPC). It was spearheaded by Kuomintang. The northern expedition in china is also extended to include the 1928 campaign that was done by the NRA or National Revolutionary Army in Beijing on 8th...