The Children by Elizabeth Barrett Browning The Song Of The Shirt

The two pieces of poetry were both written in 1843. The first half of the 19th century was of social unrest in Britain. The constant expansion of the British Empire was causing a rapid develop of industry in Britain. As a result of the Industrial Revolution, factories, mills and mines constructed and they needed to cheap and labour to work in them. Conditions for these workers, who included children, were terrible and the wages were very poor. Most working families expected children as young as five to work in order to support their family and survive.

Don't use plagiarized sources. Get your custom essay on
“ The Children by Elizabeth Barrett Browning The Song Of The Shirt ”
Get custom paper
NEW! smart matching with writer

Both of the two poems were written in the same year. They both highlight the awful conditions and appeal on behalf of those having no voice of their own in society. In this case it is the women and children who are unable to speak for themselves. Elizabeth Barrett Browning was the daughter of a wealthy and successful businessman. She had a very privileged childhood in an estate in Shropshire; very different from the life of the childfree detailed in her poem.

She was a close friend of R.H. Horne who was a fellow poet and also wrote a parliamentary commission report detailing the poor conditions of the employment of children in mines and factories. Mrs Browning was horrified by his results that she felt that more must be done to help the less fortunate.

Thomas Hood, on the other hand, was the son of a bookseller and came from a respectable but less privileged and wealthy background than Mrs Browning.

The Cry of the Children is written in a formal literary style. She uses thirteen numbered rhyming stanzas. I think she keeps her poem very simple because the content of her poem is quite sombre and dark and she wants the layout to portray that. Also, I think that she might have used such a basic format so as not to detract from the poem itself. Her poem is almost like an elegy, mourning for the children who have no pleasure in life.

In her poem, Elizabeth Barrett Browning appeals to her readers who are presumably of her own class, “Oh my brothers,” to consider the misery of the working children and to understand their lives. She gives the children a voice, describing the wretchedness of their lives and challenges the traditional views of her class. She speaks directly to the reader but even when she quotes the children’s thoughts, the style and language of their words are hers rather than the children’s. I think that the main point of this poem is not just a poem about their lives but is designed to make the reader feel guilty for exploitation of the children and profiting at the children’s expense.

Thomas Hood’s poem, “the Song of the Shirt” is written in a more down to earth style. It is written in a more upbeat metre, making it similar to that of a song. Although the theme of the poem is quite serious, Hood gives it a more humorous quality partly because if its bouncing rhythm and also partially because the language is more informal. I think that this poem was written for a less literary audience than Cry of the Children. The Song of the Shirt is a poem that tells the everyday life of a sweat shop worker who is forced to make shirts constantly in order to be able to afford food and survive.

Unlike Mrs Browning’s poem, the Song of the Shirt is more of a narrative poem and simply tells the story of the woman’s everyday life and her lamentations. It is not a direct plea for help or change. This is the case until the penultimate line when it says “Would that its tone could reach the Rich!” The words used in the song do not force the reader to think about the terrible life of this woman. It is left up to the reader to decide what should be done, but pricks the reader’s conscience every time he bought or put on a shirt.

On the one hand, the poems are very similar. They both have a similar aim which is to educate the upper classes about the difficulties in life for people who were forced to work to survive. Both poems show the level of tiredness that the workers had after a long days work. In the Cry of the Children, it states that if the children, who have been deprived of their childhood, would only fall to sleep if they were presented with a chance to have fun which is a concept they are not used to. Also, in the Song of the Shirt Hood, talks about how the woman keeps working “Till over the buttons I fall asleep”.

The Children by Elizabeth Barrett Browning The Song Of The Shirt. (2020, Jun 02). Retrieved from http://studymoose.com/children-elizabeth-barrett-browning-song-shirt-5157-new-essay 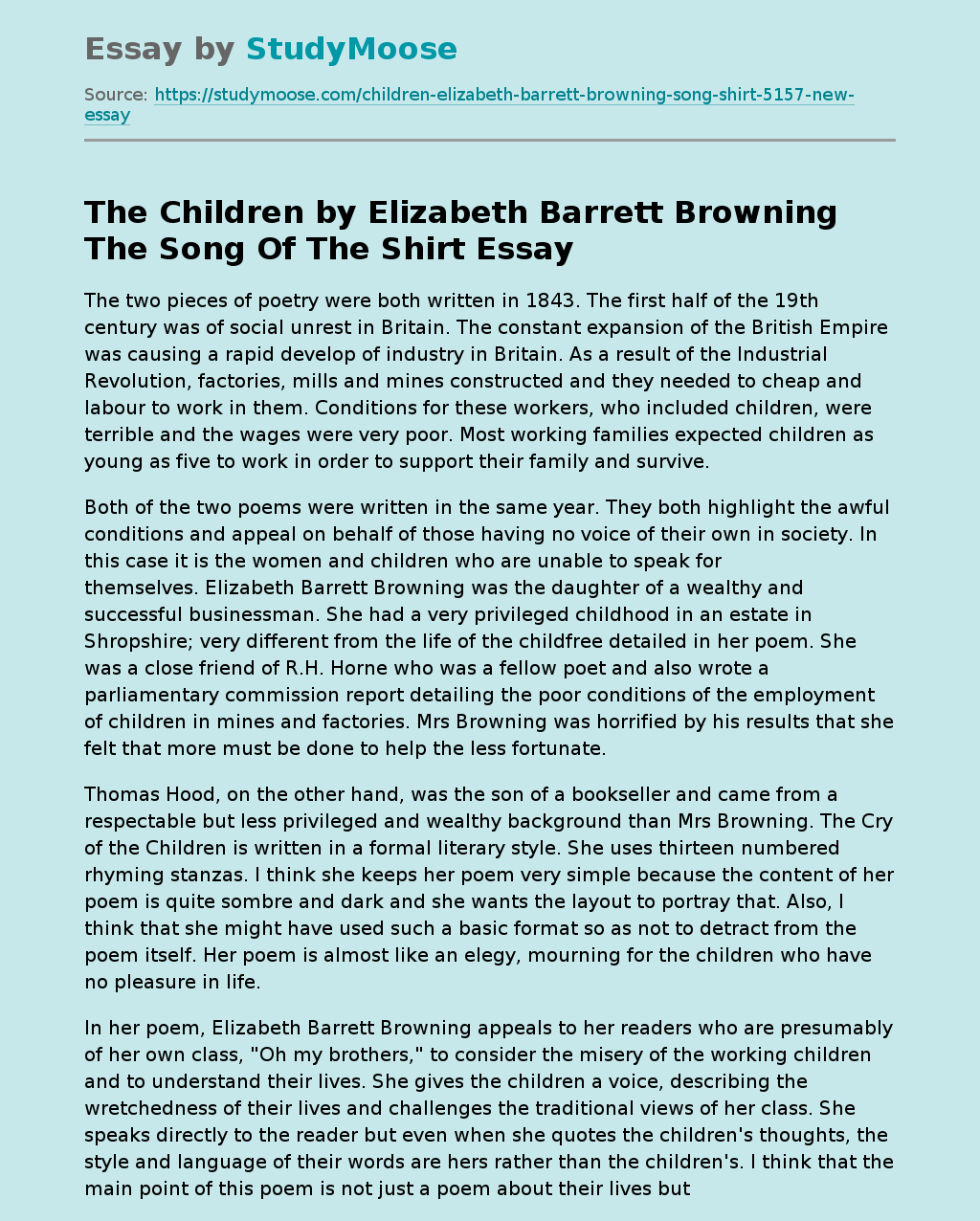