How character types are represented in the 'teen' film 'Clueless'?

Amy Heckerling’s 1995 film “Clueless” is a parallel of Jane Austin’s 19th century “Emma” and uses a variation of film techniques to represent the characters. Such examples of these techniques are narrative structure, social context, stereotypes and target audience. The plot of “Clueless” unfolds as the heroine Cher Horowitz, played by Alicia Silverstone, discovers the meaning of life after being rejected several times. She overcomes her social and romantic dilemmas by attempting to manipulate people succeeding in some cases and failing in others.

Don't use plagiarized sources. Get your custom essay on
“ How character types are represented in the ‘teen’ film ‘Clueless’? ”
Get custom paper
NEW! smart matching with writer

Cher Horowitz’s stereotype is a wealthy, self centred and naive Beverly Hills’ high school girl. She is identifiable due to her being an archetypal teenage girl, she shows this in many different circumstances for instance in the opening scene she is socialising with her friends in the mall and various other places. She comments on how her life is ‘way normal’ showing how unaware of her surroundings she is making her naive and self centred.

He is first introduced when arguing with Dionne about why she hasn’t been answering his calls. His laidback attitude is shown by his casual language, the way he dresses and his body language. He shows how unreliable he is by brushing off claims to having cheated on Dionne and ignoring a hair extension found in his car.

The rising action is when Cher tries to hook up Elton and Tai but Elton ends up liking Cher. In the climax Tai ends up becoming more popular then Cher and consequently they end up having an argument. Towards the end Tai and Cher make up and they discover a more friendly approach to people in high school. The representations of the main characters in the film are straightforward and easy to identify with adding to the conventional structure that this film follows.

The genre of “Clueless” is a ‘teenpic’ film targeted at the teenage market, this is evident by the film revolves around teenagers and the dilemmas they come across are those of high school students. The costumes and soundtrack are youthful so it will naturally appeal to a younger audience.

With an understanding of Emma the viewer of Clueless should be able to pull out several differences and similarities. Therefore an understanding of Emma would add to the level of enjoyment of Clueless. Similarities between the two are when Mr. Elton takes Emma in his horse carriage and declares his love for her this happens in Clueless but instead of a horse carriage he drives a car. This is due to the fact the film was produced in a much more modern era.

Another example is when Emma paints a portrait of Harriet and Mr. Elton obtains it for it to be framed; similarly in Clueless Cher takes a modern photograph of Tai, and Elton asks for a copy which is later found in his locker. The similarities between the main heroines are that Emma and Cher both don’ socialize with lower people in the community such as; Cher will not communicate with the ‘loadies’ and Emma will not communicate with yeomanrys.

The location of Beverly Hills helps represent these stereotypical teenagers, as the connotations of Beverly Hills are wealth and vibrancy. The location helps the representation of characters by giving the audience an idea of how characters roles play out. The soundtrack appeals to the target audience because they are upbeat and fashion orientated.

Amy Heckerling’s Clueless is a modernized twentieth century Emma which can be viewed in many different aspects. The director has made it that with or without prior understanding of Emma, Clueless can still be enjoyed. The similarities between the Emma and Clueless are endless but the main difference is it being year produced Clueless provides entertaining shots, costumes, props and an upbeat soundtrack. Clueless was produced in 1995 but I believe the stereotypes are very similar to today if not identical.

How character types are represented in the 'teen' film 'Clueless'?. (2020, Jun 01). Retrieved from http://studymoose.com/character-types-represented-teen-film-clueless-new-essay 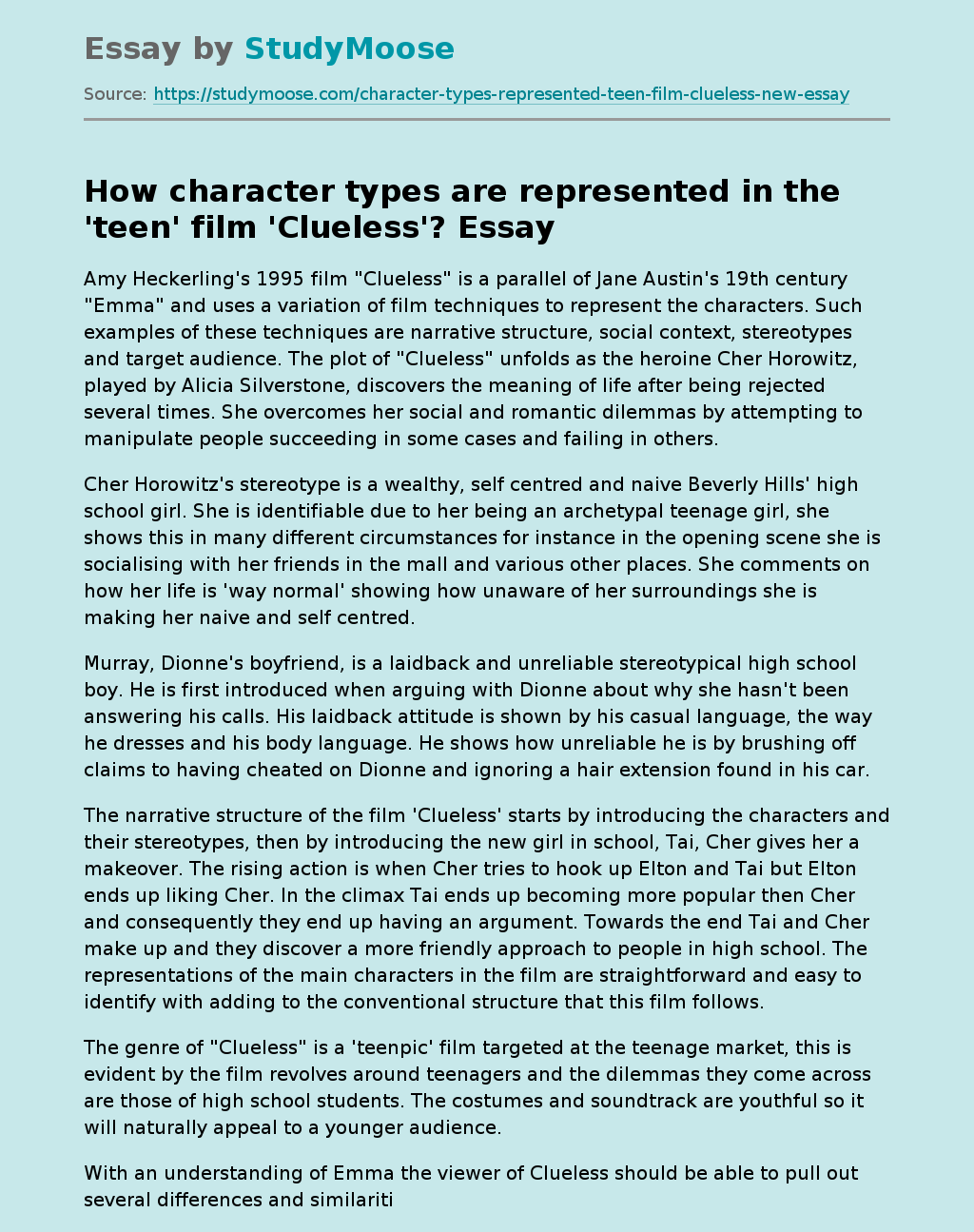