Character Archetypes in The Metamorphosis

It is a common idea that there are patterns in human nature that occur universally, with language and culture not being a barrier to expressing these human experiences. Character archetypes can be seen all throughout various forms of storytelling from film, to television, to literature. Particularly focusing on Gregor Samsa and Grete Samsa in Franz Kafka’s The Metamorphosis, translated by Stanley Corngold, various character archetypes can be discovered and analyzed. Gregor Samsa, the main character of this novella, is most likely associated with more than a singular archetype.

Don't use plagiarized sources. Get your custom essay on
“ Character Archetypes in The Metamorphosis ”
Get custom paper
NEW! smart matching with writer

It is reasonable for Gregor to be seen as The Outcast, as that is the most obvious trait related to his character. Although Gregor lives with his family, he is separated from them and lives isolated in the confines of his own room. In the very first page, the narrator describes Gregor’s room as a “regular human room” (Corngold 1).

The precise detail of describing the room as “human” provides insight as to how alienated Gregor already feels upon waking up as a vermin.

He is trapped “between the four familiar walls” (Corngold 1), the walls being a representation of his alienation from the rest of his family as walls are used to separate parties from interacting amongst one another. Gregor worked as a travelling salesman who disregarded his own personal desires and dreams to single-handedly provide for his entire family. This act of enduring suffering for the benefit of others can be related to the archetypal character of The Martyr. Gregor complains about how in his job he is “tortured for travelling, worried for catching trains, eating miserable food at all hours, and constantly seeing new faces, no relationships that last or get more intimate” (Corngold 4).

The intense descriptions of suffering Gregor endures such as “torture” and “miserable” depict how incredibly grim Gregor is about his job. Since he mentioned it during his ranting, Gregor desires to have a relationship. However, these relationships constantly due to his job that requires constant movement and lacks in stability. Gregor further confesses his distaste towards his job by thinking, “If I didn’t hold back for my parents’ sake, I would have quit long ago…” (Corngold 4). The only reason Gregor continued his job as a travelling salesman was to support his family. He feels indebted to them and will endure suffering just so his family is satisfied. Despite the torment of his job, Gregor continues working (until he is physically unable) and tolerating for the sole reason to sustain his family, making him a martyr. Even towards the end of the story, Gregor continues to undergo suffering for the sake of his family. As the whole family turns on him, initiated by Grete, Gregor understands his burden on his family, loses his will to live, and takes his “last weak breath” (Corngold 54).

Without Gregor, the rest of his family lived better lives as they got a “cheaper apartment” which was “better situated and in every way simpler to manage” and Grete growing “livelier and livelier”, turning her into a “good-looking, shapely girl” (Corngold 58). Gregor is blamed for the downfalls of the family and once he is removed from the environment, the conditions of its people improve, making Samsa a Sacrificial Victim or a Scapegoat. The depth of Gregor’s character allows him to be interpreted in an amalgam of ways and thus could be viewed as possessing traits that pertain to multiple character archetypes. Grete Samsa, Gregor’s younger sister, could also be seen to have various archetypal characters assigned to her. At first, Grete took care of her brother by cleaning his room and feeding him each and every day. She was the only person who interacted with Gregor and performed direct acts of care. This would her archetypal character as The Caregiver since she looked after Gregor.

However, later on in the story when Grete takes Gregor’s action of coming closer to listen to the violin playing as an act of aggression, she goes to her parents and says, “I won’t pronounce the name of my brother in front of this monster, and so all I say is: we have to get rid of it” (Corngold 51). She turns on him and begins to address him as an object instead of someone whom she acknowledges as her brother. Grete breaks down and loses pity for Gregor and now wishes for his demise. She initiates the acts against Gregor in order for him to leave, making her The Catalyst. It is Grete’s character who sparks the behavior of the family that ultimately leads to Gregor’s death.

Archetypal characters appear in stories in order to express universal patterns of human experience. These rather cliche characters allow for any story, regardless of language or culture, to be understood universally. As The Metamorphosis by Franz Kafka is originally a German text that has been translated by Stanley Corngold, some words may have been “lost in translation”. With the embodiment of archetypal characters, it is rather simple to understand the roles and manners of the characters without the fear of mistranslation. The depictions of the characters and how to convey them become more accessible due to the universality archetypes provide in works of literature.

Character Archetypes in The Metamorphosis. (2021, Apr 22). Retrieved from https://studymoose.com/character-archetypes-in-the-metamorphosis-essay 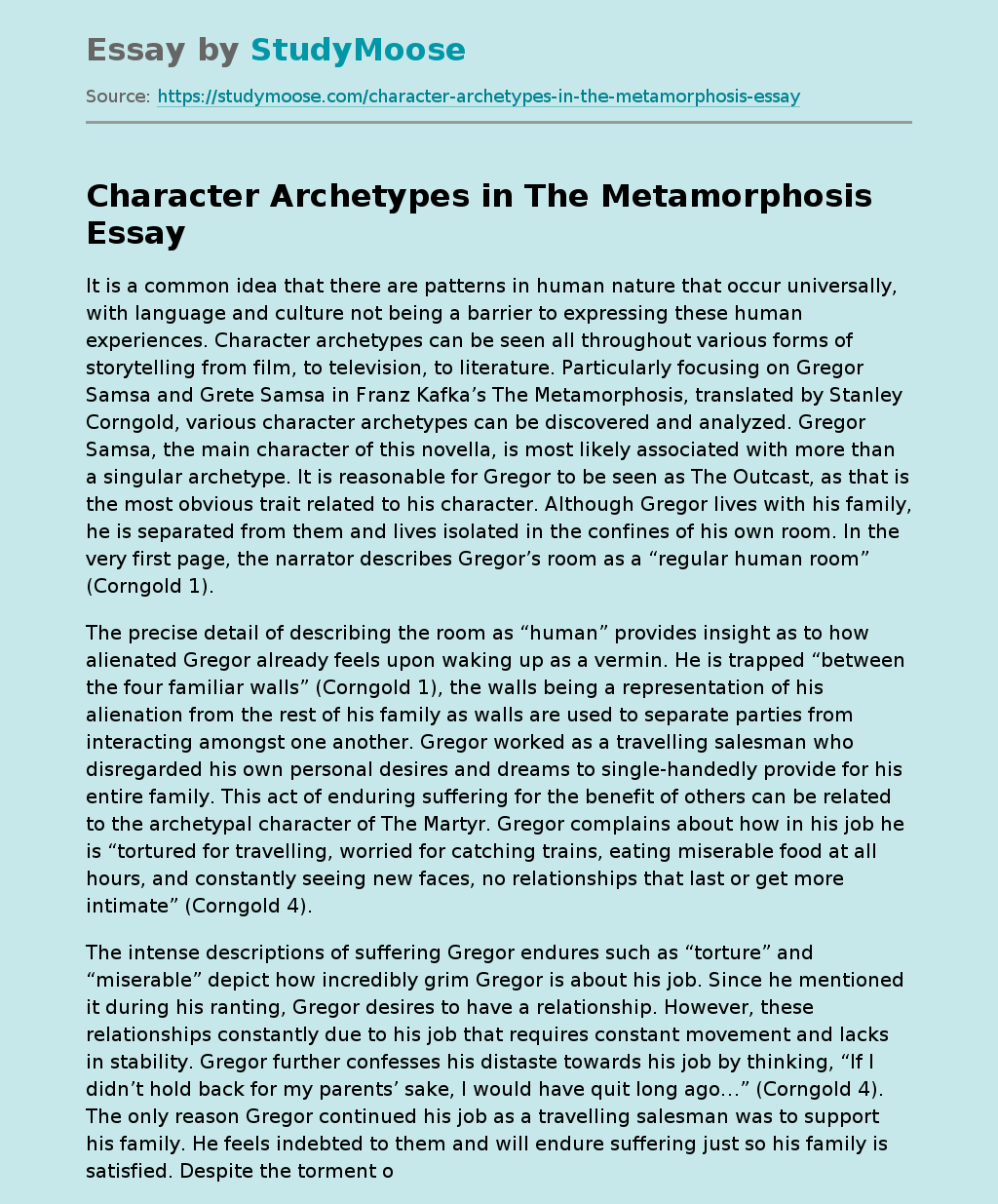