August Wilson’s Fences is a story of an African American family, primarily centered around Troy Maxson and his difficulties as a black man in a predominantly white society. The story focuses on many themes and puts an emphasis on the relationships between Troy and his family. As the story revolves around Troy, we see that many of the decisions he made start to affect those around him and the relationships of his friends, family, and loved ones slowly disintegrate. One of the most prominent relationships that were destroyed was the marriage between Troy Maxson and his wife Rose Maxson.

Don't use plagiarized sources. Get your custom essay on
“ Character Analysis of Rose ”
Get custom paper
NEW! smart matching with writer

Loving, caring and understanding, Rose in August Wilson’s Fences is a character that remains a strong woman for her family despite the issues in her household. With Rose in Fences, she is a mother that exhibits strength and sacrifice, as she puts her own needs aside for the well-being of her family. As the play moves forward we see that Troy’s decisions concerning marriage, infidelity, and family slowly shatters the relationship with Rose and directly affects her role as a housewife, mother, and woman.

In the beginning of Fences, Rose is identified as Troy’s wife as “her devotion to him stems from her recognition of the possibilities of her without him,” (Kirszner and Mandell 1114). Here she introduced during the conversation between Troy and Bono and states that without Troy, Rose wouldn’t have what she does now and she would be leading a worse life; which she also recognizes.

1 Based on her introduction alone, her identity stems from the fact that she is married to Troy. During this time Rose, as a character, is not seen for her character traits or personality, yet she is already given the label of ‘housewife’. This label is further reinforced by the introduction of Act 1, Scene 2 where the scene begins with Rose hanging clothes and singing softly to herself. After she sees Troy, she follows up with “’Morning, You ready for breakfast? I can fix it soon as I finish hanging up these clothes?” (Kirszner and Mandell 1122). In this scene, she is shown as the regular housewife; cooking food, doing laundry, etc. Her role and identity here is defined by her marriage with Troy through her actions and dialogue as she is expected to play her role as the wife and typically cook food for the family while tending to other household chores. As the play moves forward, Rose maintains the static role of housewife despite Troy’s treatment towards Cory and actions of infidelity.

Infidelity, adultery, extramarital sex, unfaithfulness, cheating. These actions are all of the same and are all abhorred. In marital relationships, it is commonly assumed that both partners remain exclusive although this is not always met. So when Rose comes to find out that her husband, Troy, has been cheating on her and his mistress is now pregnant, she is absolutely devastated. The marriage between Rose and Troy has been destroyed. After this, Rose’s role as a woman and wife start to connect. In Act Two, when confronting Troy, Rose talks about her life and marriage as she compares it to planting when she says “I took all my feelings, my wants and needs, my dreams and I buried them inside you . . . I planted myself inside you and waited to bloom. And it didn’t take me no eighteen years to find out the soil was hard and rocky and it wasn’t never gonna bloom. But I held on to you, Troy. I held you tighter. You was my husband.” (Kirszner and Mandell 1147). When Rose told Troy that she took her feelings, wants, needs and dreams and 2 buried them inside him, she was telling him that she’d given her life for their marriage and their family. She put his needs and the needs of their children consistently over hers. Here it is understood that Rose sacrificed herself and her identity for the sake of marriage. But as she noted, there was never a bloom. In Rose’s day and age, it was uncommon for women to stand up for themselves. When she found that her husband had impregnated Alberta, she told him that she would no longer live with him as his wife with “But you a womanless man,” (Kirszner and Mandell 1151) and they lived separate lives. When Alberta died, Rose adopted Troy’s daughter as her own, and took care of her, only allowing Troy to provide for them as Rose ended up accepting the role of mother.

After the affair and the birth of Raynell, Rose’s role as a mother will stay static. She will still care for and nurture Raynell. But before that happens, many aspects of herself change. During this time, we start to see Rose waver from the role of housewife and begin to identify as a woman and a person herself. When Rose stands up to Troy, her identity as a wife starts to diminish. Rose tells Troy, “And you know I ain’t never wanted no half nothing in my family. My whole family is half. Everybody got different fathers and mothers my two sisters and my brother. Can’t hardly tell who’s who. Can’t never sit down and talk about Papa and Mama. It’s your papa and your mama and my papa and my mama.” (Kirszner and Mandell 1145). At this point, we start viewing Rose for her beliefs and see her as a person; not Troy’s wife. We see that she had needs and wants as well. Rose wanted family and she wanted to keep her family together, which was torn apart after Troy’s affair. This affair also helps her identify more as an independent woman now. Following the affair, Rose becomes cold towards Troy as she tells him that “Your dinner’s on the stove. All you have to do is heat it up,” and then leaves the house to do what she wants. Troy is asking questions here, but not receiving answers as his “wife” leaves.

In Fences, Rose’s relationship with Troy diminishes with every decision that he makes. These decisions start to affect the characters and change their roles in the household. Rose stays as a mother, but is no longer a wife. She becomes her own person, with beliefs, and starts thinking of herself. She makes a stand for herself and her family and realized where she went wrong in her marriage after Troy’s death. She told Cory that she’d made the mistake of not making Troy think of her. “When your daddy walked through the house he was so big he filled it up. That was my first mistake. Not to make him leave some room for me,” (Kirszner and Mandell 1160). Rose gave up love for comfort as she followed up with “But at that time I wanted that. I wanted a house that I could sing in. And that’s what your daddy gave me,” (Kirszner and Mandell 1160) and soon her identity was established after their marriage as wife because “that’s what life offered me in a way of being a woman,” (Kirszner and Mandell 1160). Based on her needs, wants, and beliefs, Rose could have been her own person from the beginning. But she didn’t do that; she married Troy to become wife and mother. For her then, her marriage with Troy was her entire identity. But afterwards Troy’s decisions for his family and himself helped make Rose develop into a more rounded character.

Character Analysis of Rose. (2016, May 16). Retrieved from https://studymoose.com/character-analysis-of-rose-essay 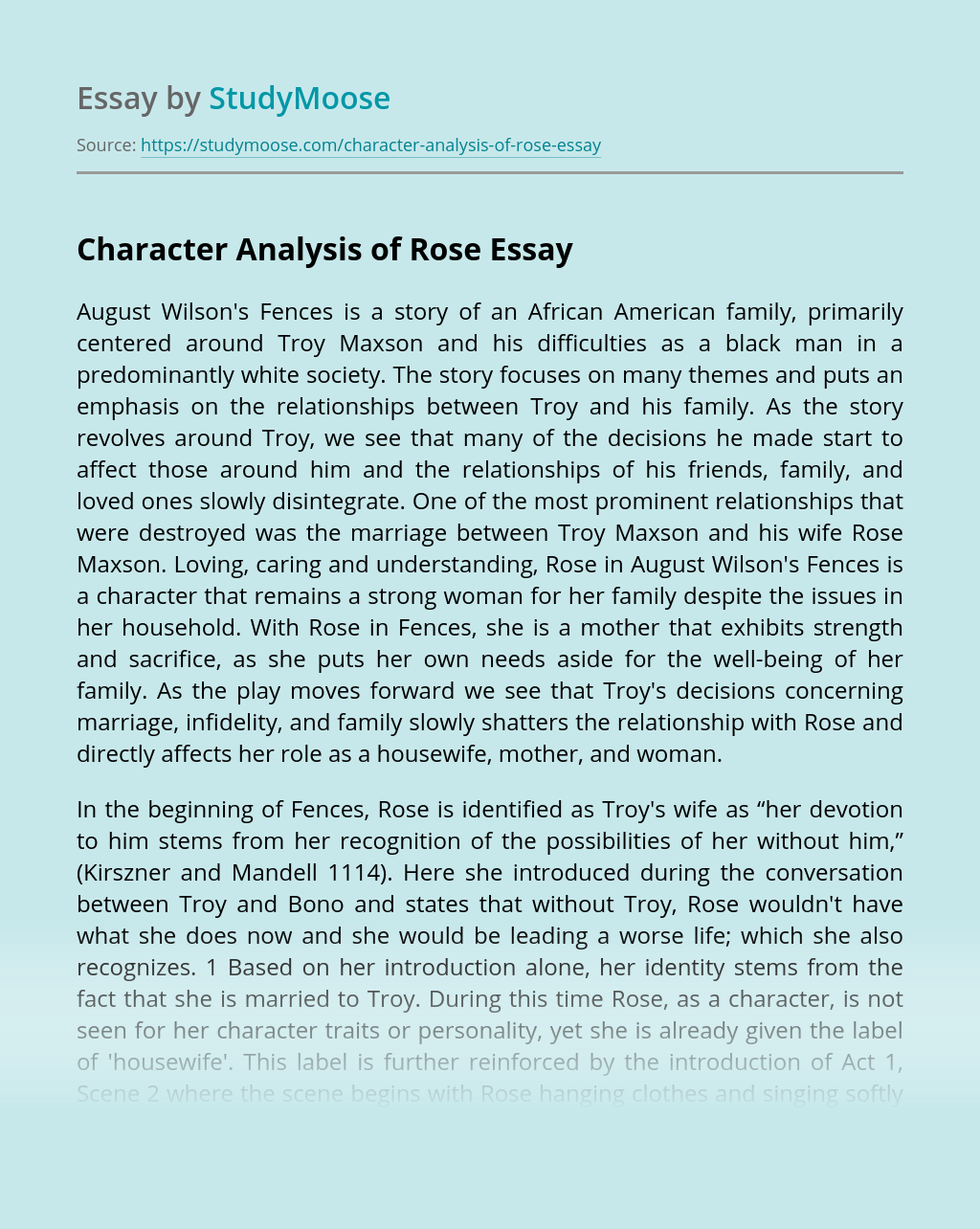