How Does the Cop Culture Manifest Itself?

The theme of this essay is that of Cop culture, a viewed way in which the police behave in their area of occupation. In this essay I will be looking at how the culture manifests itself and how this is enacted and re-enacted by those in it. Taking into consideration some of the areas of study i. e. identity, gender, membership, group and cultural values, and power relations. We can look first at what cop culture is, how it is created and sustained.

Don't use plagiarized sources. Get your custom essay on
“ How Does the Cop Culture Manifest Itself? ”
Get custom paper
NEW! smart matching with writer

How through the nature of the work in the police force, and their interaction and socialization within the larger community is viewed.

In a work environment such as the police force a deeply conservative group, and the native of the work that of isolation. This isolation creates within its members seen as a “race apart”, a form of solidarity, which establishes as they view the world as an “us against them” concepts. They have a to look out for each other, back each other up and the level of trust between them has to be high.

A very closed shop environment, which is hard to penetrate. Police cop culture has created a set of values and beliefs, which in many ways reflect those of a wider society from which they come.

The major population of the police force is taken from working class and the lower middle class persons, who make up the bulk of the population. So it can be seen generally that the views actions and opinions of this segment of society will generally reflect that of a wider society.

The sub-culture created sets them apart though from wider society, the shift work, and general nature of the job also creates isolation. In general they mix with fellow group members on and off duty, it is not so much a job as a way of life.

It breeds within them an attitude that permeates all other areas of their life, an attitude of constant suspicion that cannot be switched off, giving them a sense of mission. It has been said that it leads them to view people in stereotypical ways and the general public. This is seen to reflect in arrest rates where offenders usually are seen to be over represented in some types of groups. There are two levels of sub culture those of the street level police and those who come into contact with the general public.

They have a great deal of discretion in their job, in that the choices of who they arrest, who they do not. This discretion is said to reflect their stereotypical values and usually the white male, middle class views that they aspire to. The problem with the police in the past has been its unrepresentative of majorities groups within ranks. In the case of race, gender, sexual orientation and social class. To have a force that reflects wider society it must have in it a representative input of these groups. Otherwise it becomes narrow in its view of the world.

The police force is made up of a collection of individuals with different views and ideals. However once a person is recruited and trained, it can be seen that their views will represent the collective attitude of the group. This is similar to military individuals as the incoming identities is stripped down and it is rebuilt into the image of a police officer. This sustains the status quo of the organization. The way the cop culture is observed is seen in articles published “Changing police culture” by Janet Chan, this was based on a T.

V. documentary called “Cop it Sweet”. In their dealings with aborigines there was seen to be a great deal of racism viewed, and that the attitudes, practices and obvious norms of their behaviour were being televised for all to see. This was very disappointing in the respect that over the previous 8 years there had been a great deal of reform, with regards to changing police culture it was seen that it obviously had not managed to change a very resistant culture.

A culture, which was ingrained into a Police force with very stringent norms and values, which had stood firm in the face of reform. In the article by Shearing and Ericson 1991 “Culture as figurate action”. This states that because police work is built into blue print of organization rule based action. That all actions and decisions are set by the organization structure using the tool kit provided for them. That the whole of society is their sphere of operation and they learn how to react and act as police officers.

The article by Waddington “police canteen sub culture” this has a different point of view in that cop culture is seen by him to be unsubstantiated by the way police talk, banter is viewed in the canteen and other police action is taken outside. That this a backstage environment and any racial or sexist stereotypical views are kept in this backstage and not re-enacted outside. It is the police way of coping with their job and environment. In articles by Reiner he sates that cop culture is seen as how police officers view the world and their role in it.

How Does the Cop Culture Manifest Itself?. (2020, Jun 01). Retrieved from http://studymoose.com/changing-police-culture-12279-new-essay 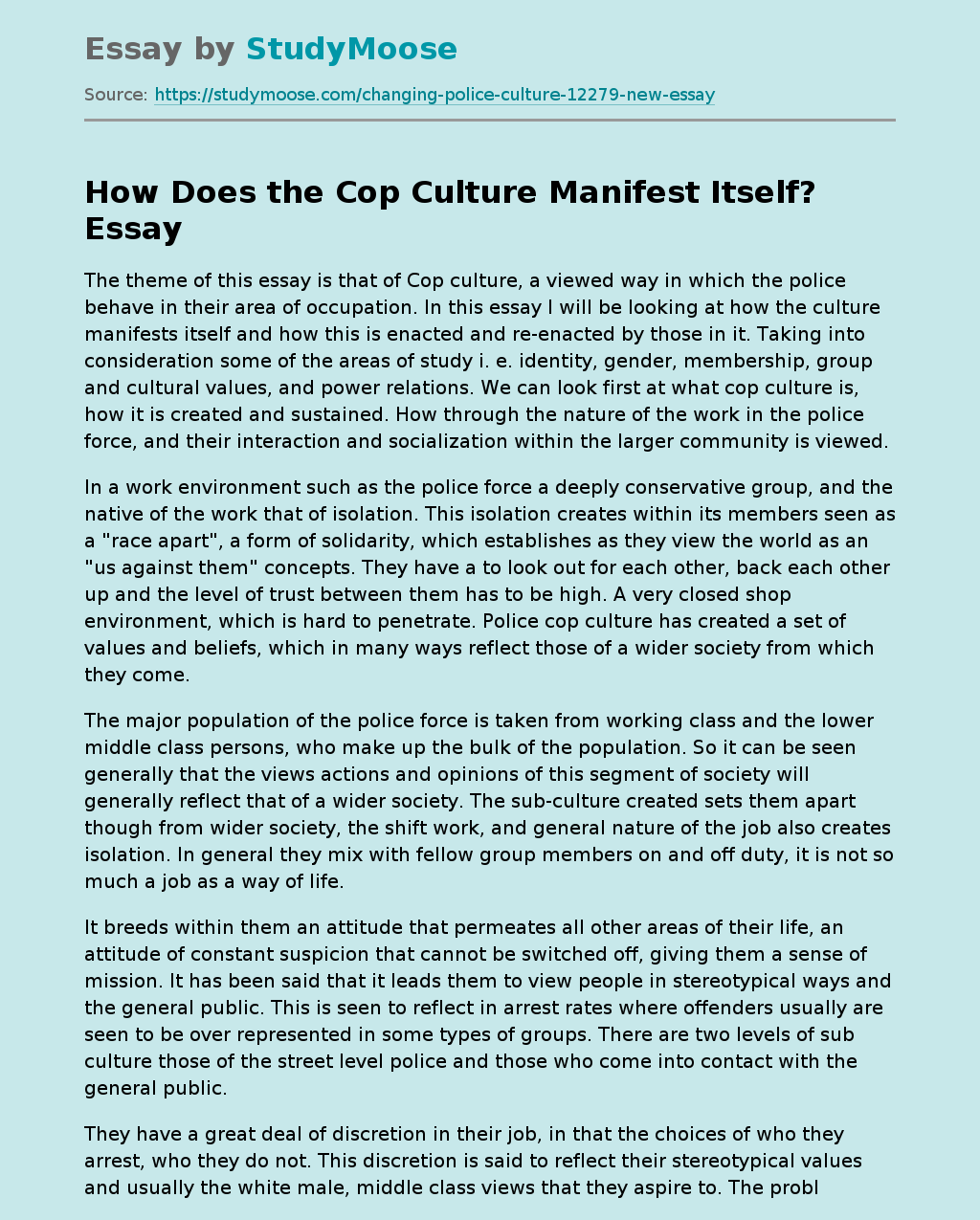