Celia, A Slave is a story that takes many different historical facts from the era that the book was placed in, and uses a slave named Celia’s story to tie them all in and show how these events that didn’t directly affect her, would indirectly affect her, and the other slaves in this time as well.

The author, Melton A. McLaurin, not only wrote the story of Celia in his book, but he also focused on other historical events taking place at the time to support his thesis that Celia’s case demonstrated what was happening on a global scale.

He used facts such as the slave revolts in Haiti and the Dred Scott decision to make a case on why things were so hard for slaves at the time in the United States, and how they affected Celia, and her case. McLaurin also used different people and organizations like the Border Ruffians and the Massachusetts Emigrant Aid company to show the culture and society of the time and place of Celia’s story.

The slave revolts in Haiti would indirectly affect Celia. Because the slaves revolted in Haiti, and actually won, it came as a wakeup call to the southerners. They knew that the slave population outnumbered their own, and if they revolted against them, they weren’t sure if they would be able to stop them. This made the Southerners even stricter when it came to slavery, and less lenient when it came to any types of escapes, or breaking of laws.

This made it impossible for the jury in Celia’s murder case to believe that it she truly killed him in self-defense.

The Dred Scott decision would directly affect her, because of the fact that the decision was still valid, and she, along with all the other slaves, weren’t protected by the U.S. Constitution, and were not considered U.S. citizens. This ruled out any argument that John Jameson, and the rest of her defense, would come up with arguing her constitutional rights. Instead, they brought up things like, how it would’ve been possible for her to kill a man of his size, and how it was possible that the body would’ve been completely disseminated in a fire in a matter of hours. Thomas Shoatman also tried to testify that after she striked Newsom the first time “he threw his hand up to catch her”, but the judge sustained prosecution objections to the defendants testimonies, because a majority of the jury and the judge himself were all slave owners. This even came as a problem for John Jameson at first, because he was defending a slave when he had some himself. The thing that really allowed him to relate to Celia though, was the fact that he had a daughter, and he wouldn’t have wanted the same injustice fall on her if the roles were reversed.

The Border Ruffians showed the culture and society of the time in Missouri. The border ruffians would cross over into Kansas and vote for all things pro slavery related, and would beat Kansas citizens into voting for pro slavery as well. This was an example of the people that resided in Missouri, and how intent they were on making slavery legal in as many states as possible.

The Massachusetts Emigrant Aid Company also showed the culture of the time, but from the aspect of people who didn’t want slavery. The company took advantage of the Kansas Nebraska Act to try and get anti-slavery supporters to settle in the Kansas territory, to try and make it a slave free state. The company was crucial in settling Kansas, and making it a free slave state.

The book was a good read, though a bit repetitive at times, and educated the reader about different issues at the time of Celia’s case that would affect her, and also affected slaves lives in at the time. It also would educate the reader to what it was like to live in the time of Celia’s case, and get an insight on what it was like for her, and others. 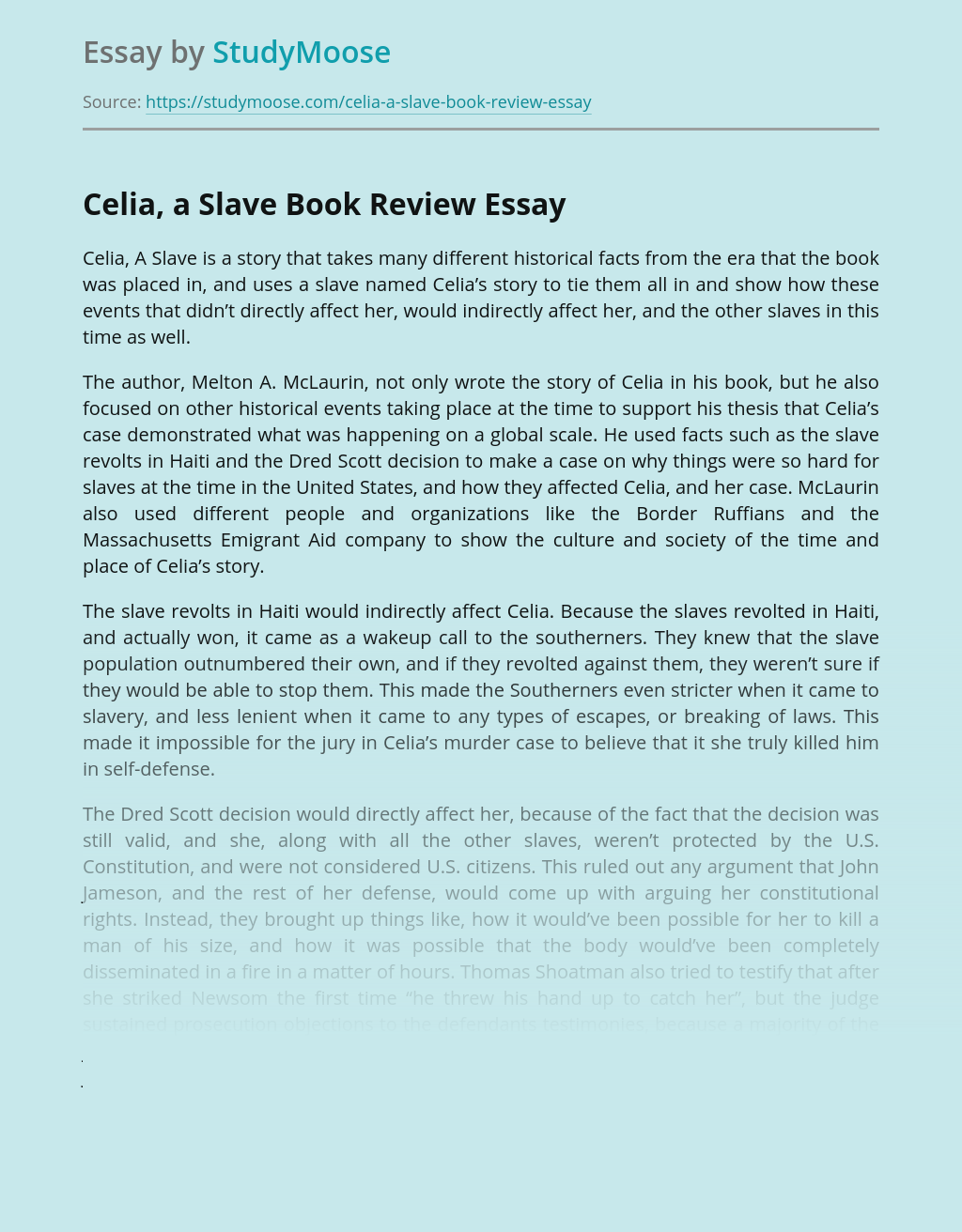