Celebrity culture is recognized today as the popularization of certain individuals that have characteristics which may or may not be authentic, but society views as exceptional. Today’s stars do not really need to have an admirable talent or virtue to be known throughout the world. These idols are now able to gain worldwide coverage through common celebrity magazines and accepted television shows due to self-promotion or unethical behaviour. The celebrity culture always has and always will have an impact and influence on society.

Turn in your highest-quality paper
Get a qualified writer to help you with
“ Celebrity Culture ”
Get high-quality paper
NEW! AI matching with writer

Celebrities are constantly in the media and have become role models for adolescents and teenagers. The adolescent minds in the current generation is becoming more deviated from picturing the world as a whole and is more focused on their own “bubbles” where anything in that bubble must directly relate and affect them. The most noticeable impact is on their views towards beauty, sexualisation or sexual development, and health.

Beauty, in a typical teenager vocabulary, has been narrowly transformed into a young, symmetrical, skin-and-bone, tanned woman or man swishing back and forth their gorgeous hair and smiling their perfect teeth.

More and more of teenagers are being affected by the sexualisation of girls according to mental health experts. A research on analyzing the effects of virtually every form of media from music lyrics to video games showed an effect that young girls are succumbing to the pressure of sexualisation by posting naked pictures of themselves on the internet or allowing boyfriends to take nude photos of them. Furthermore, casual celebrity sex appears to be the norm amongst the youth. As a result of an over-sexed society, young girls can be found with self-image and emotional problems like anxiety and shame, and lack of confidence in and comfort with her own body. Sexualisation of girls has negative consequences on girls’ ability to develop a healthy sexual self-image, research suggests.

Celebrities do not only have a negative impact on the personalities and looks of fans, but also in their health. There have been cases where fame has been used positively and to send out a good message but there have been other instances in which celebrities have put out a bad image. For example, the appeal of drug and alcohol abuse has increased and so have images of intoxicated celebrities in magazines and television. Celebrities have glamorized smoking in the media and are setting an example for people everywhere that it is acceptable to smoke. Stars should make it an ambition to refrain from using drugs and drinking excessive amounts of liquor because it sends a message to supporters that a life of drugs and alcohol is a satisfactory way to live.

Celebrities need to change the way they act and how they are viewed. Their actions have more of an effect on us then many people believe they have. Thin, compulsive celebrities are changing the way many young teenagers think and act. Celebrities need to change these unpleasant habits now and realize that they need to be more concerned with themselves and with their portrayal in the media. Unfortunately, the power of who becomes famous and what images are presented is completely in the hands of the media. 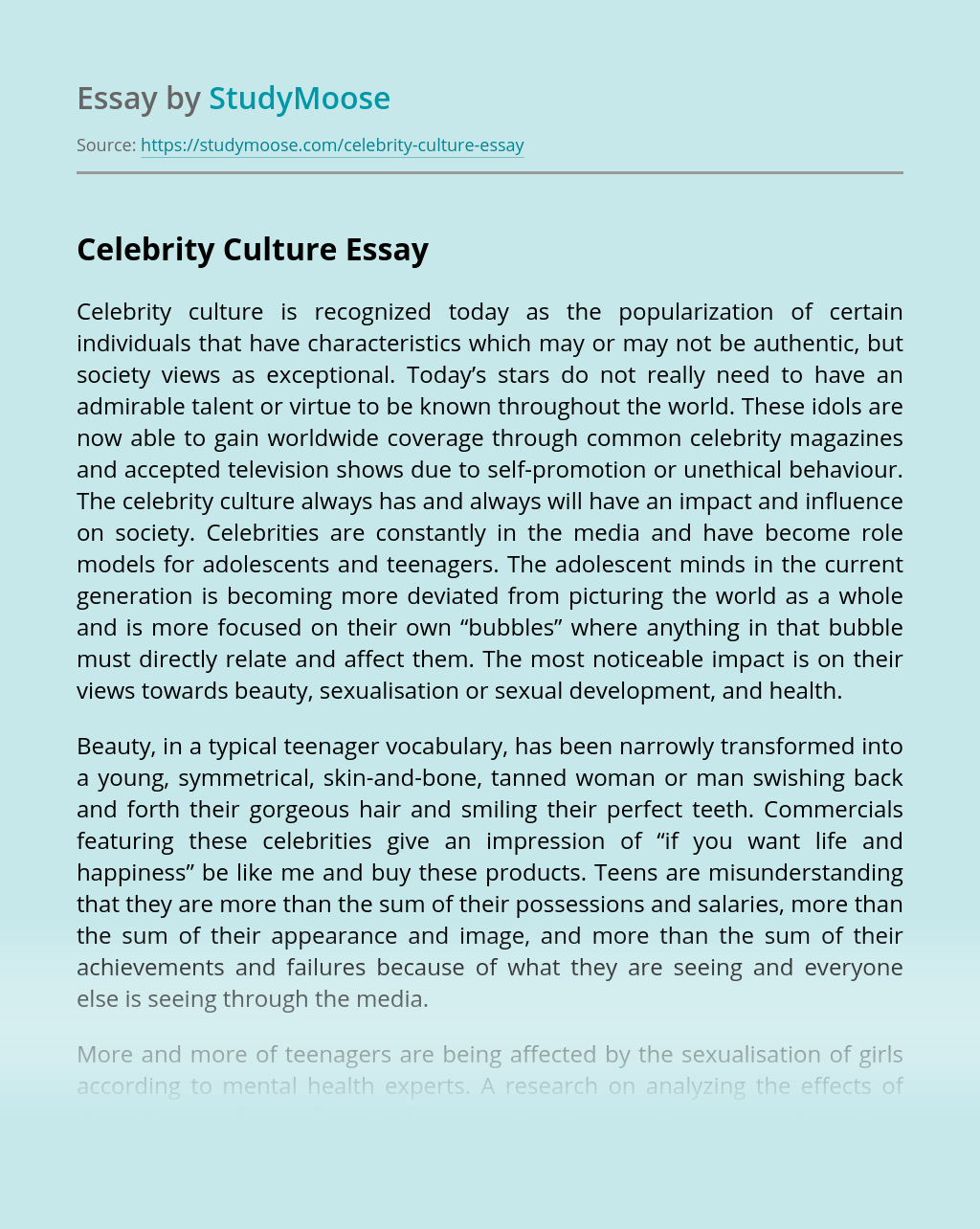 Turn in your highest-quality paper
Get a qualified writer to help you with
“ Celebrity Culture ”
Get high-quality paper
Helping students since 2015
Stay Safe, Stay Original