Celebrities and Sports Stars being bad role models to children

Celebrities and Sports Stars being bad role models to children In todays world you can’t even look at the news without witnessing one of these celebrities or sports stars making a mockery of them selves. Whether it’s anywhere from drinking and driving, doing drugs, racing sport cars , or doing all three of those things in one instance like singer/songwriter Justin Bieber did last month. The only thing that makes doing all that stuff worse is having millions of adoring fans who will mimic your actions, wear what you wear, even say what you say.

Turn in your highest-quality paper
Get a qualified writer to help you with
“ Celebrities and Sports Stars being bad role models to children ”
Get high-quality paper
NEW! AI matching with writer

Celebrities and sports stars have a tremendous impact on children in today’s world. If you ask a child who his or her role model is there is a higher chance they will say a celebrity or sports stars name over there own parents name. So when a kid sees his role model smoking pot or drinking liquor in his head he will think wow if he is doing that it must be cool so I should try it.

How ever most of these troublemaking celebrities say it’s the parents are the bad influence and that they are to blame for there kids choosing the celebrities to be there role models over there parents.

How ever in one particular case it is the celebrity’s parent’s being a bad role model to the celebrity who then is a bad role model to millions of fans. On January 22 a day before Justin Biebers arrest for drag racing under the influence he was allegedly seen partying in a Miami night club with his father the night of the arrest; Also his father was reportedly in one of the SUV’s in the caravan of cars following Justin Biebers car to block off the rode so his son could race.

When fans see something like this happening they are more likely to drink and do drugs hop in a car and attempt to race which could potentially cause serious injuries or even death to many innocent people. Parents are saying that Celebrities are rotting there children’s minds by exploiting explicit drug use, .alcohol abuse, and underage sexual behaviors These parents have bring up a good point because still being a teenager myself I see the world around me from a different perspective I see people around me drinking doing drugs and more and have gone even further to ask why they do it and the response I got back from all of them in one way or another was because one of the artists they listen to does it so he or she wanted to try it.

But saying that its celebrities faults isn’t always the right thing to say because most celebrities are actually great role models on children it’s just a select hand full of them who give a bad name to all of the others studies show that teens who idolize a celebrity who doesn’t give in to such pressures and weight and drugs will likely benefit from their obsession (www.everydaylife.globalpost.com). Although there are more good celebrities who can positively affect your child’s life a lot of these children seem to be more interested in the bad ones this is mainly because of media. Media is the main reason why these children copy celebrities. In seconds media can have a story sent all around the world and into the ears an heads of children who read or hear these stories. Media always seems to focus more on the bad things celebrities do like if a celebrity is donating a lot of his time to help research a cure for a HIV and another celebrity gets caught racing his car the celebrity racing his car will defiantly be the one who is acknowledged for there actions. So in a way it isn’t always the celebrities faults because without a lot of these corrupt media sites to twist the stories and spread the stories into the heads of these kids they may have not even existed.

But celebrities shouldn’t be attempting potentially harmful behaviors like that in the first place because there not stupid they know that the moment they get caught doing something illegal it is going to me spread through out the world have more bad consequences than good. Instead they should be using this power of the media they poses to being good things that will give off positive influences to children. This probably wont happen though cause most celebrities actually become more famous and popular for the bad things they do than the good so why would they stop doing something that will make them more popular. On the other side you have the celebrities saying that it is the parents fault that there kids are doing what they are dong. Parents do have control over what there kids can watch listen to and hear but in the end they don’t stop there kids from listening to music or seeing something that will make them behave badly out of pure laziness and before they know it there kid is drinking or doing drugs and there isn’t much the parent can do at this point. One thing that every parent wants to hear is there children tell them that there mom or dad is there role model but if that isn’t the case then the parent should find a good role model for there child.

You can influence your child into likening a celebrity by having them listen to that celebrities music or watching there movies even if that celebrity is acting inappropriately you can explain to your child that it is just a movie and he is actually a good person out side of that role and that if he or she were to do any of that in real life there would be consequences. Parents can also explain to there children that celebrities are given more leeway from police and judges because of the reputation and money. In the past century parents have been giving more freedom to there children if you got caught smoking marijuana or drinking alcohol around forty or fifty years ago you would get a beating of a life time from your parents but due to so many law changes and new laws things are not like they used to be. There is not much a parent can do now to prevent there children from doing something bad except for sitting them down and giving them a stern talk. In the defense of celebrities maybe if parents made there children want to have there parent as a role model then they wouldn’t go off looking for celebrities to be there role models.

This isn’t always true it’s not like the medieval times anymore where a parent is a black smith so there child will be one. Now a lot of the time as children grow up they decide they want to go down a different path in there life and not the one there parent went down so they will target a role model who fits there idea of the person they want to become. Parents have to realize that they can’t just put the blame on a celebrity for there child’s mistakes because they are to lazy to prevent there child from following these bad influences instead they should focus on making sure there child becomes a productive and decent human being. Parents are defiantly winning the whole blame game from the point of the media but the real person to blame isn’t the celebrities or the parents. The instigator of this whole debate is all of these media sources exploiting these celebrities like they are animals.

The people who work for media constantly following these celebrities taking pictures and looking for everything they do wrong. No one is perfect so you can’t expect a celebrity to behave 100% of the time they didn’t ask for all of these role models. I would never want to live a life full of people constantly following me around taking pictures; That has to be one of the most stressful jobs in the world sure they are going home to there mansions and driving around nice cars but a lot of these celebrities actually suffer from depression because of all this fame they have. Like Justin Bieber he was just a normal thirteen year old boy before Usher discovered him and changed his life for ever. Anyone that young with that much money and power would surely do the same exact thing he is doing now. Celebrities should be aware that they have so many role models but shouldn’t bear any responsibility to them because it’s impossible to make everyone happy when you have that many people on your back twenty four seven. One exception I think is Miley Cyrus she started he career out on the Disney channel with millions upon millions of little girls watching her so now when those girls are all of a sudden seeing her smoke marijuana on stage and dressing in outfits that make her look half naked they are going to mimic her actions.

Miley Cyrus was well aware that she was the role model to all these little girls and is using that to her advantage because she knows anything she does her millions of followers will do the same. In the song twenty three which she was featured in she displayed scenes of her smoking marijuana in a school bathroom and doing all other kinds of activities that someone wouldn’t normally do. Miley Cyrus is doing nothing but sending mixed messages into all of these girls’ heads causing them to do things they wouldn’t normally do. This all started happening because she her ratings were down and she wasn’t as popular as she used to be so her managers decided to give her a new look and re invent her and before they knew it she blew up and is now one of the most known celebrities in the entire world and she doesn’t seem to be slowing down anytime soon epically with her newest outbreak of trying to make out with Katy Perry live onstage but she denied the kiss and proceeded to tweet about it which started a twitter fight which only gave both of them more fame and followers on all of there social media accounts. It even made breaking headlines over the potential war that could be happening between Russia and Ukraine.So yeah no one is to really blame for all of this because no one wants this to happen except for a select few.

Celebrities and Sports Stars being bad role models to children. (2016, May 19). Retrieved from https://studymoose.com/celebrities-and-sports-stars-being-bad-role-models-to-children-essay 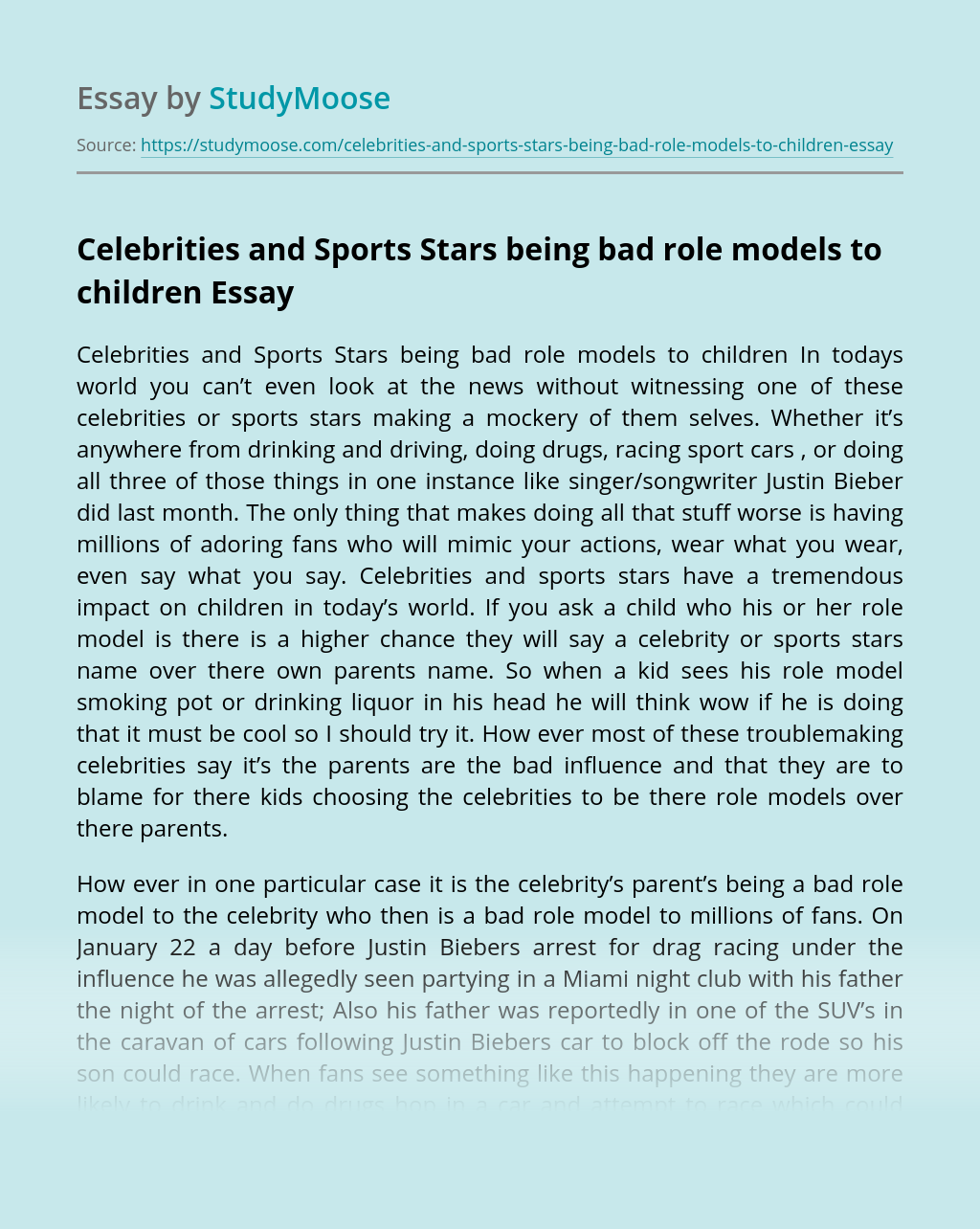 Turn in your highest-quality paper
Get a qualified writer to help you with
“ Celebrities and Sports Stars being bad role models to children ”
Get high-quality paper
Helping students since 2015
Stay Safe, Stay Original