Malaysia has a number of festivals and celebrations, most of which are either religious or cultural in origin, and are swathed in traditions and rituals. Malaysia. Festivals is a celebration of life. These celebrations bring peace and joy to the humanity ,and break the monotony of life. A country where one can experience a multitude of cultural celebrations and festivals, as well as, and most importantly, good food(!) all year round.Almost every month of the year, tourists and locals alike immerse themselves in one celebration or another, thanks to the diverse cultural practices we have.

Don't use plagiarized sources. Get your custom essay on
“ Celebration in Malaysia ”
Get custom paper
NEW! smart matching with writer

To help our foreign friends have a better overview of the festivities to look forward to when visiting Malaysia, and also for the benefit of locals, here is a list of the monthly cultural celebrations and festivities Malaysia has to offer. (Note: Some celebrations may vary from year to year as they are based on lunar calendars.)

January Thaipusam Celebrated by the Tamil community, the manifestation of Thaipusam is best witnessed at Batu Caves in Selangor, or in Penang.

The jaw-dropping sight of devotees carrying ornately decorated frames, better known as kavadis, would stay with you long after you’ve experienced it; this unique festival is a sight to behold.

Chinese New Year Celebrated worldwide by the Chinese to mark the first day of the New Year in the Chinese lunar calendar, the celebrations last for 15 days. Expect fireworks, lion dances, the prominence of the colour red, and open houses with scrumptious Chinese meals! Chap Goh Mei, or the 15th night of Chinese New Year, symbolises the end of the festival.

To celebrate the Chinese version of Valentine’s Day, young women inscribe messages or well-wishes on oranges and throw them into lakes or ponds.

Good Friday Held in churches to mark the “saddest day” in the Christian calendar, it is observed in remembrance of Christs’ Passion, crucifixation and death. On the Sunday that follows Good Friday, Easter Sunday is celebrated to commemorate the resurrection of Christ. Malaysia Water Festival

A country with natural settings of lakes, beaches, seas, Malaysia hosts this event annually with a variety of water-based sports. Activities such as kayaking, fishing, and cross-channel swimming promises a whole load of adrenaline-pumping time!

May Wesak Day Celebrated by Buddhists to pay homage to Buddha and to mark the three significant events in Buddha’s life (his birthday, enlightenment, and achievement of Nirvana) the festival begins with meditation and prayers. Donations are made to the poor and needy. Harvest Festival

Known to Sabahans as Pesta Ka’amatan, it is a thanksgiving festival to celebrate the rice harvest. The festivities include traditional sports such as the buffalo race, the best tapai (rice wine) competition, and the “Unduk Ngadau” or Ka’amatan Queen Competition. June

Hari Gawai The Gawai Dayak is celebrated in Sarawak to mark the end of the paddy harvesting season. It also marks the beginning of the new planting season, and activities such as dancing, singing, and a considerable amount of drinking tuak (rice wine) take place in the longhouses. Dragon Boat Festival

Known also as the Chang Festival or Duanwu Festival, it commemorates a patriot and poet in China named Qu Yuan. The best place to witness the celebrations is in Penang, where the annual Penang International Dragon Boat Festival takes place on a grand scale.

July Rainforest World Music Festival Held in the grounds of the Sarawak Cultural Village, the annual three-day music festival is fast becoming the largest musical event in Malaysia. It celebrates the diversity of world music, while at the same time highlighting the use of traditional acoustic world instruments.

Independence Day Commemorating the independence of the Federation of Malaya from the British in 1957, August 31 holds a special place in the hearts of all Malaysians. The biggest celebration of the event takes place annually at Merdeka Square, or more commonly known as Dataran Merdeka in Kuala Lumpur. Hari Raya Aidilfitri

Also known as Hari Raya Puasa, it marks the culmination of Ramadhan, during which Muslims the world over fast for a whole month. Traditional Malay food such as rendang, ketupat, and lemang is served. This is also a time to forgive and forget past quarrels, where family members ask for forgiveness from friends and family members. Hungry Ghost Festival

Observed among the Chinese, the festival commemorates the opening of hell’s gates for the spirits from the lower realm to roam freely for a month. Things to note during the festival are the larger than life papier-mache figures and performances of Chinese opera and Ko-Tai (energetic singing and dancing with performers in glittering costumes).

Malaysia Day September 16 commemorates the establishment of the Malaysian federation in 1963, with the joining of Malaya, North Borneo, Sarawak and Singapore to form Malaysia. Mid-Autumn Festival Fondly known as the Tanglung (Lantern) Festival or the Mooncake Festival, it is celebrated by the Chinese to mark the end of the harvesting season. Mooncakes are a must as it also commemorates Chang Er, the moon goddess.

October Hari Raya Haji To commemorate the Islamic festival of Eid al-Adha, the occasion is marked most significantly by the conclusion of the annual Haj (pilgrimage to the holy city of Mecca). Sacrificial-slaughtering, or korban, takes place in mosques, and the meat is distributed to the poor and needy.

November Deepavali Also commonly referred to as Diwali or Festival of Lights, the festival is significant to all Hindus as it symbolises the triumph of good over evil. Oil lamps are lit to ward off darkness and evil, and like every other major cultural festivals in Malaysia, open houses are held.

Christmas A religious festival to mark the birth of Jesus Christ for Christians, Christmas in Malaysia is celebrated like everywhere else in the world. However, Christmas is also viewed as a universal celebration by many, one that that carries a secular rather than religious meaning. Even without the traditional “white Christmas”, the celebrations carry on with a kaleidoscope of lights, endless Christmas displays, and crazy shopping deals for all! 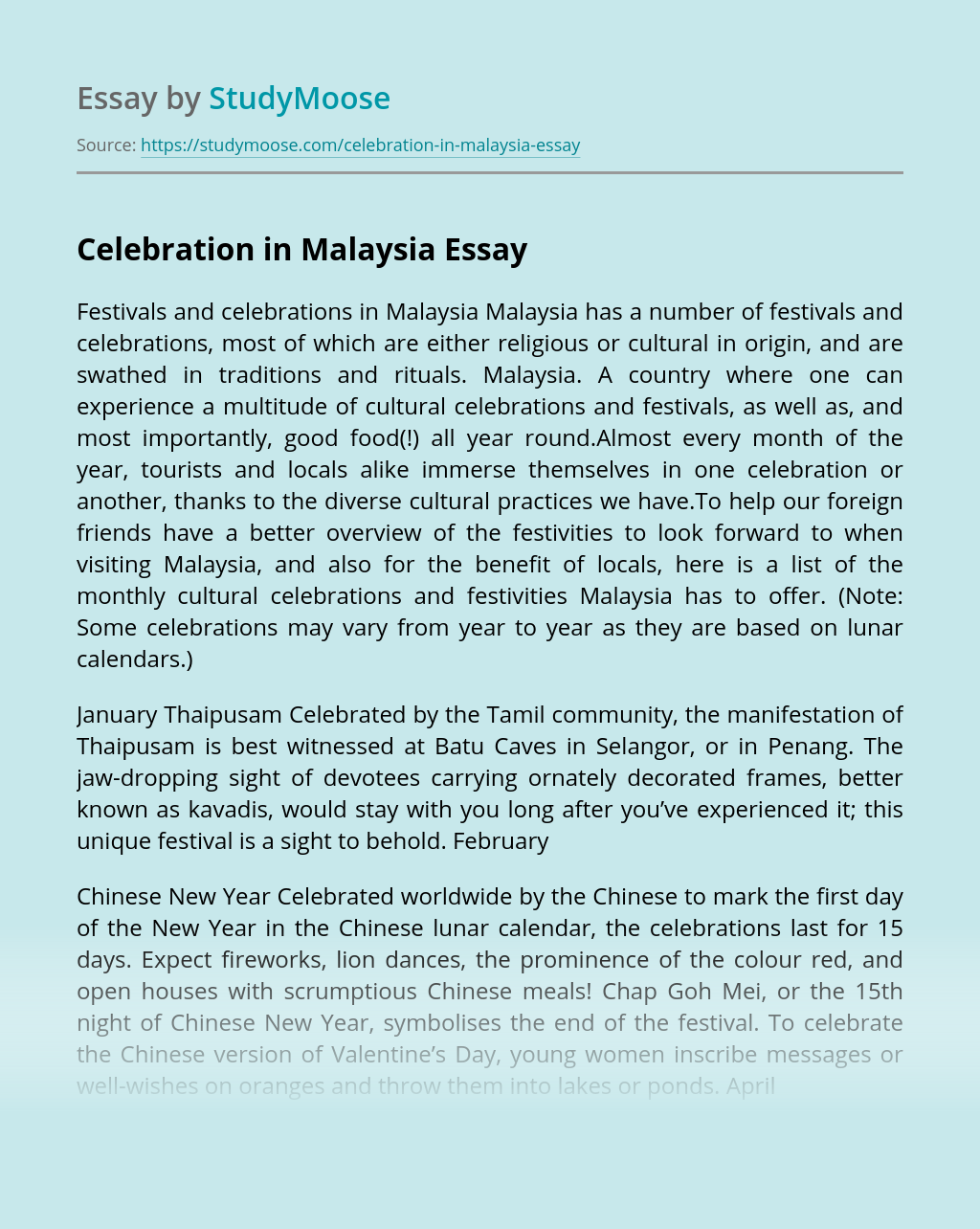