Basant is a big festival of Pakistan it is also known as a Jashn-e- Baharan. It is celebrated in February of each year. The kite lover’s like to fly kites day and night. Parties are designed to celebrate it. People planned different type of the get together to meet each other. Sky is full with colorful kites of different shapes and sizes day and night. Many people organized the different competition in city especially Androon Lahore. These competitions are extremely serious and the victories depend on the quality of “Dorr” (special thread use to fly the kites).

Turn in your highest-quality paper
Get a qualified writer to help you with
“ Bassant festival ”
Get high-quality paper
NEW! AI matching with writer

This festival gained the attention more and more over the years from all over the world. Many visitors come to Lahore to attend this festival. Its increase the Pakistani tourism many outsiders come to Lahore especially to see this event. Women also participate in this event they wear yellow and green dresses to make this festival more colorful. This beautiful festival is banned from 2007 because of some dishonest people who used the dangerous chemical in Dorr which was harmful for human beings.

Every year the arrival of spring brings with it the much-awaited festival of the year, the Basant. Also known as Jashn-i-Baharan, people participate in kite flying matches to herald the coming of spring. This festival is at its peak in Lahore. Basant is not only a kite flying event, but also a cultural festival of traditional food, dresses, dances and music.

Every year, tourists from all over the world gather in Lahore to witness the most colourful and entertaining festival of the year.

Not only in Lahore, Basant is celebrated with much fervour and zeal in other cities of Pakistan too. Young and old alike take great pleasure in celebrating Basant. While the kids and men are busy in kite flying, the women are busy in making delicious food. Everyone gathers on the roof tops to watch and participate as the spring winds whip the brilliantly coloured diamond-shaped paper kites into the air in such large quantities that the sky can hardly be seen.

The sky is covered with hundreds of beautiful kites of all sizes and types and this sight indeed is worth seeing. Various clubs organize carnivals where a number of stalls are set up, which offer a variety of wares including bangles, flowers and handicrafts. Kite flying competitions are also held. Thus everyone indulges in the Basant fever with keen participation to make it a memorable event of their lives.

Basant, the festival of kites, is said to have originated from India. The Hindus believe that when the fields are mustard yellow, it is the time for the spring festival Basant Panchami in reverence to Goddess Saraswati. Saraswati is the goddess of intelligence, wisdom and knowledge of all arts, science, music and dancing. Basant season is the king of all seasons because it is free from the intense heat of the summer, from the shivering colds of the winter and from the havoc of rain. Having its roots in India, Basant festival gradually spread to our country and is now considered one of the biggest festivals of the year.

Colours of Basant
Yellow is the predominant colour of Basant. Yellow depicts the blossoming spring flowers in the fields of Punjab. Girls wear yellow clothes, meanwhile the boys drape themselves with yellow dupattas. The ladies wear attractively decorated gajras made of marigold. Mostly yellow kites are preferred over other coloured kites. Red and orange are the other colours that signify Basant.

Kite flying
Kite flying is the most important aspect of the Basant festival. Kite flying usually takes place on roof tops. Boys of all ages prepare for the event by buying and making kites of tissue and sticks, as well as by craftily applying bits of ground glass to their own kite strings in order to cut the opponent’s string. The kites during Basant act like warriors who battle for control throughout the day. Their aim is to cut the string of the opposing kite and to secure a very high place in the sky.

The kite’s weapon is its maanjha — the deadly string, which the kite flyers spend many days to prepare. The string is coated in a mixture of rice paste and ground glass to strengthen it. Every time the maanhja cuts the string of the rival kite, a cheerful cry of Bo-Kata soars in the air. Night time kite flying is another
spectacular sight to witness. The entire sky is lit with heavy lights and in this eliminated sky, one can see hundreds of beautiful coloured kites dancing and competing for supremacy over the other. This atmosphere is further enlightened with barbecues and loud music coming from all corners of the city.

Pros and cons
Basant is not just about flying kites. It is also a time to get together and to spend time with family and friends. Basant plants the roots of brotherhood and people of all classes whether poor or rich come very close to each other. Not only does the Basant festival provide entertainment, but it also gives us the chance to get close to our loved ones. Another advantage of the Basant festival is that it boosts up the economy as tourists from abroad assemble in Lahore to witness Basant festivities. The Kite industry, even though small yet rapidly expanding has brought engineering developments in this art. Apart from this, the string, or the maanjha, is exported to India which is beneficial for our trading industry.

Despite the happiness and fun that Basant brings us, there are some unfavourable aspects to it as well. Tragic accidents take place every year. People get so absorbed in kite flying that they often fall from the rooftops and as a result get injured or at times even lose their life. Then there are those who die from electrocution when their kites get tangled in the wires of the electricity poles and they try their best to free their kites.

Not only are innocent lives lost but some people feel that a lot of money and time is wasted during the Basant season. Instead of spending thousands of rupees on lavish meals and huge scale parties, the same money can be utilized to help the needy and poor people of the country.

Conclusion
Today, Basant is considered a traditional and cultural event. This year Basant was celebrated all over the country on February 15. Those of you who went to Lahore to celebrate the event I’m sure had a blast! Well some enjoyed themselves at the various events that took place in Karachi as well, as all you need is a roof top, few kites, music and delicious food to celebrate Basant. 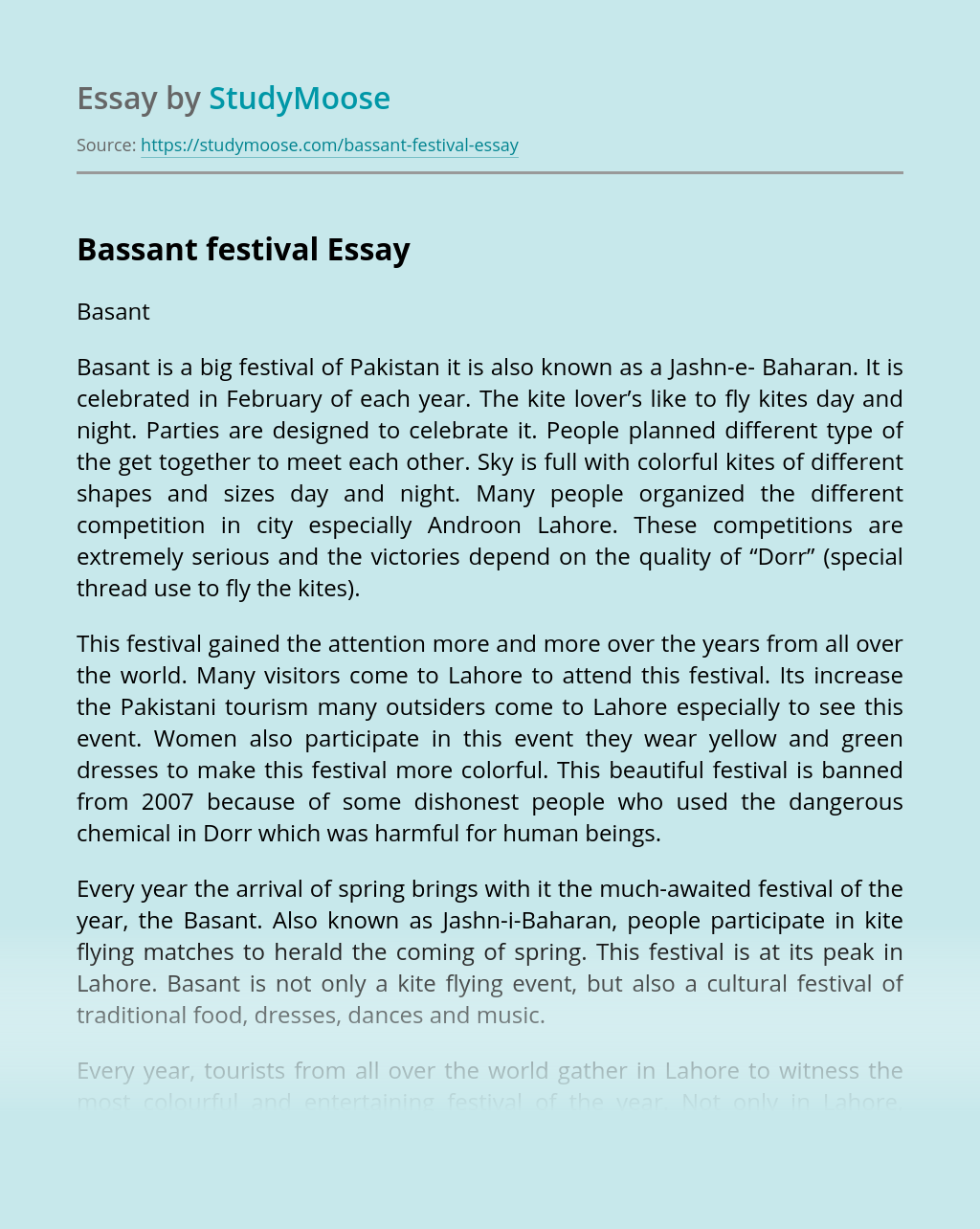 Turn in your highest-quality paper
Get a qualified writer to help you with
“ Bassant festival ”
Get high-quality paper
Helping students since 2015
Stay Safe, Stay Original