The economic crisis has it origin in the US mortgage market and the housing downturn in US and other large economies such as the UK. Most of the countries in United Arab Emirates were not initially affected by sub-prime mortgage crisis. However due to globalization which has led to inter connected world the knock-on effect has exposed UAE to problem stemming from Europe and other western countries. Although most people refers to the US sub-prime mortgages and the bursting of the housing bubble as the real cause of the financial crisis there were other preceding factors that led to this crisis.

Don't use plagiarized sources. Get your custom essay on
“ Causes of global economic crisis ”
Get custom paper
NEW! smart matching with writer

The high demand for financial asset created a gap and as part of the supply response to high demand of financial asset the speculative bubbles came on board to rescue the situation. Due to availability of excess capital globally then more fund found their way into the US mortgage market (Johnson, 2009). The other factors leading to sub-prime crisis was securitization of financial instrument where banks would pool their loans into sellable asset.

The security buyer benefited by having regular payment of all the mortgages held while the bank off load it risk.

Seen as the greatest financial invention, securitization spread from Wall Street to others. This was due to high profit generated from the process which lured many to join the concept. Banks resulted to more borrowing to create more securitization. 2 Many banks did not consider the issue of bad loans as the risk was to be borne by the buyer of security.

Investment banks deviated from their main role of trading in risk and joined the mortgages and home loan on the other hand high street bank started trading in risk.

The problem with securitizing sub-prime mortgages is that it did not provide for systematic risk and the pricing did not take into account the presence of systematic risk not until people started to default on mortgage payment. When the problem associated with the system started to unravel then people started to loose trust and confidence in the system. Lending by bank and other financial institution slowed down and in some instance ceased.

There was a drastic decrease in asset value which led to many lenders to demand their money but on the other hand investment bank had not secured the retail funding and had little deposit which led to their collapse. Furthermore banks in their effort to rebuild their capital base suck money from the economy and are slow to give loans. As household and businesses depend on loan for effective operation then the credit crunch has resulted to a spiral of problems (shiller, 2008). How UAE was affected At first the UAE is affected through the falling oil prices.

Much of the economies are supported to a large extent by income from oil export and due to global financial crisis which has seen many nation slides into recession this has forced the price of oil to decrease due to low demand. The real estate sector has also been largely affected by the current crisis. 3 Banks have imposed rigid lending criteria which have led to less fund for real estate development in addition speculative investors took flight due to liquidity problem and this has further affected the sector.

As a result of the crisis interest rates have increased since banks view loans and mortgages as more risky which limit the available fund to companies and consumers. The impact of increase in interest rate is two fold. First it can fuel the risk of recession in UAE and drastic decrease in growth of the real estate market (hill, 2009). The other channel through which the UAE will be affected is the tourism industry. For instance in Dubai the income from tourism accounts for 17-22% of GDP and in a period of recession people cut expenditure on leisure activities such as tourism.

Therefore the tourist based economies will be some of the hardest hit during this period of recession. Furthermore when you loose a job in UAE your visa is cancelled and you are expected to leave within 30 days of visa cancellation. This has not only lead spending from unemployment to reduce but also to completely disappear. Finally earning from export will decrease due to lower purchasing power among the consumers in the global market. Action to be undertaken by UAE in order to recover from the crisis Interest rate need to be reduced to make more money available for real estate market and consumers.

This will increase aggregate demand which forces supplies to increase output. Supplies will in turn require more input in term of labour, material and capital thereby reducing unemployment and increasing economic growth. To improve on tourism then the UAE should lower prices, more value and better offers to attract 4 visitors with small budget. The visa rules also need to be changed to prevent outflow of local revenue and people. The UAE should make use of new technology to market and produce product that will compete favourably in the global market (Felton, 2008).

Precautionary measures The financial regulation needs strict control to ensure transparency and accountability. In addition the regulatory body that oversee the operation of banks need to be more vigilant to ensure that banks adhere to rules and all transactions are transparent. Furthermore the credit rating agencies need more regulation to prevent toxic asset being traded in the market. Finally the government should continuously asses the economic growth and take collective measures where necessary. 5 References: 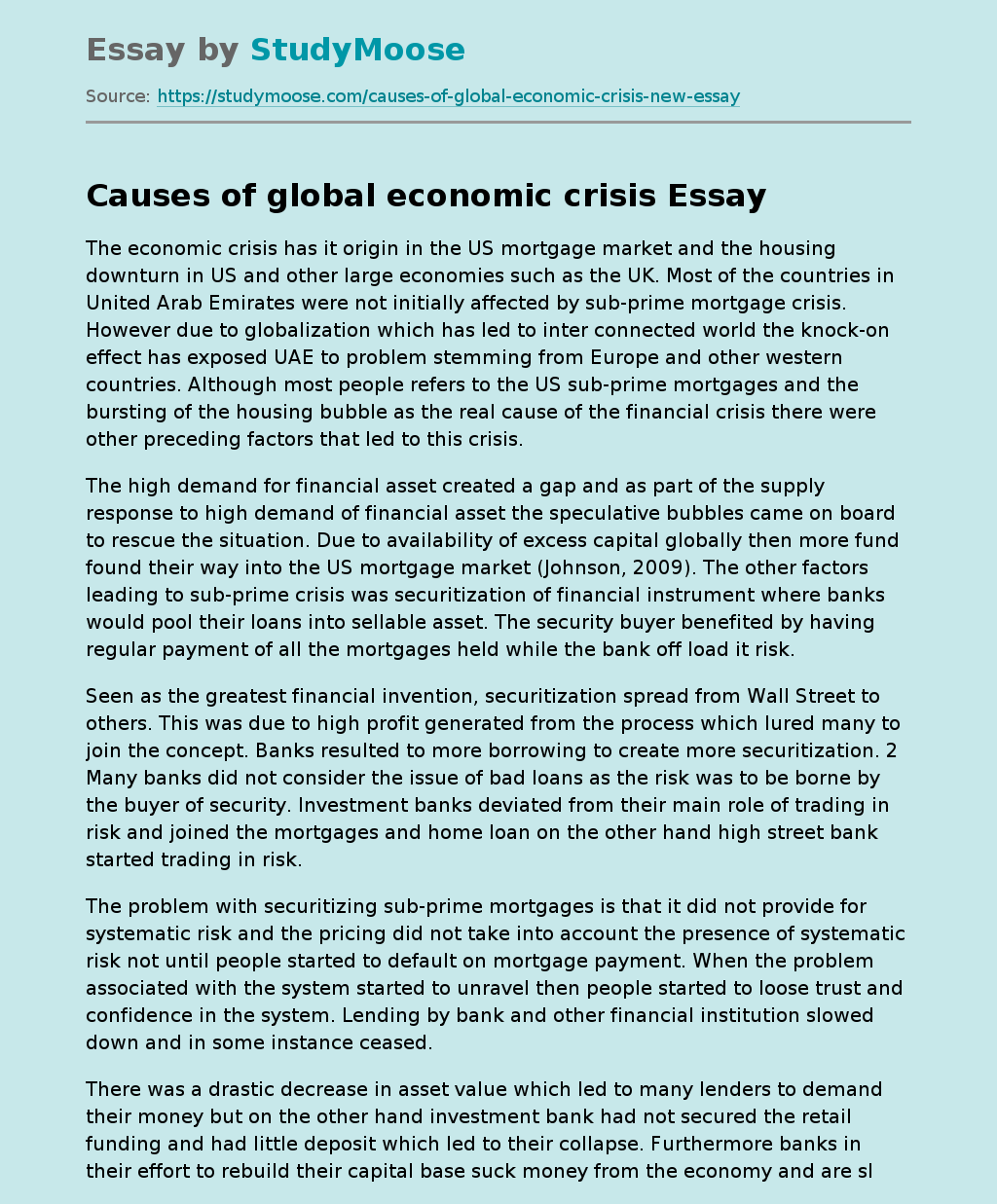