Causes And Effects of Prostitution

INTRODUCTION
Legally, Prostitution is the sale of sexual services. The services may consist of any sexual acts, including those which do not involve copulation. While payment may be any nonsexual consideration, most commonly it is the form of “money”. Prostitution is said to be one of the “oldest profession in the world”. Most people do the jobs they do only for the money, not because they actually enjoy “the work” enough to continue doing it even without a monetary reward. It is the giving or receiving of the body for sexual activity for hire but excludes sexual activity between spouses.

Don't use plagiarized sources. Get your custom essay on
“ Causes And Effects of Prostitution ”
Get custom paper
NEW! smart matching with writer

It is the performance for hire where there is an exchange of value, any of the following acts: Sexual intercourse; sodomy, or; manual or other bodily contact stimulation of the genitals of any person with the intent to arouse or gratify the sexual desires of the offender or another. ( Sanchez and Agpaoa) Most of the prostitutes come from the rank of the girls working in the hospitality industry.

Women in the industry are considered as an economic commodity and sexual merchanadise, which bring in profit. (Rosales) At present, women no longer dominate prostitution. There are also males who are engage in prostitution. As publisher in Panorama, call boys call on right behind the backs and fronts of law enforcement officers. Police are helpless against male prostitutes because of the absence of the law that prohibits bold shows. It was observed that the most of the call boys clientele are the gays and rich mathrons.

Like call girls, these people are offering their sexual devices for money. ( Reyes )

The first account of prostitution in the Bible is found in Genesis, where Judah – one of Jacob’s twelve sons, descended from Abraham – paid the bride price, in accordance with Israelite custom, for Tamar and gave her to his eldest son. Long story short, she eventually went to the second son, who refused to copulate with her. Through no fault of her own, Tamar was sent back to her relatives in shame as a poor investment, as she produced no children. Determined to prove that the fault lay with Judah’s sons, she approached his tents disguised and exchanged sex with Judah for a goat. Tamar became pregnant, and avoided harsh punishment for being a pregnant widow that shamed Judah and his sons by revealing keepsakes given to the prostitute employed by Judah. Through prostitution, Tamar proved that it was her husbands who failed in conception. As in Sumerian and Babylonian societies, there existed a hierarchy of prostitutes. The elitehetaerae – a term always denoting female prostitute entertainers – made substantially more money, and had to be freeborn; this meant that slave prostitutes were motivated to earn enough money so that they could purchase their freedom and thereby increase their income. However, the expenses of this upper class were also greater: they offered symbolic gifts to the gods and had to maintain beautiful bodies and homes. Besides reading, maintaining physical beauty consumed much of their time. The hetaerae also enjoyed a social influence that far exceeded that of the non-prostitute women: some became famous for their clientele, others for their beauty, and they and their interactions were often recorded in some manner.

The pornai, on the other hand, could be either male or female and were accessible to all classes of men. Prostitution in the Philippines is illegal, but widely prevalent. Penalties range up to life imprisonment for those involved in trafficking, which is covered by the Anti-Trafficking in Persons Act of 2003. Prostitution is often available through bars, karaoke bars (also known as KTVs), massage parlors, brothels (also known as casa), street walkers, and escort services. In 2013 it was estimated that there were up to 500,000 prostitutes in the Philippines. In her “Anti-Prostitution Act” (Senate Bill No. 2341), Senator Pia S. Cayetano cites the number of women being exploited in prostitution in the Philippines now ballooning to 800,000 Prostitution started around Clark air base since the early 1960s, when the base assumed importance due to the Vietnam war. During the 1970s, the main street of Olongapo had no less than 30 girlie bars catering to the needs of U.S.Navy troops visiting Subic Naval base. The city acquired the pseudonym “Sin city”. The closure of the U.S. bases in these two places did not change the scenario much – it only changed the clientele. Fields avenue near Clark (Angeles) continued to grow as a center of the sex tourism industry, under the umbrella of “entertainment” and “hospitality industry”. The girlie bars at Olongapo were closed down in a major drive by the then governor Mrs. Jane Gordon, however, they only shifted to the neighbouring town of Barrio Baretto which contains a series of at least forty bars which act as prostitution centers.

Prostitution caters to local customers and foreigners. Media attention tends to focus on those areas catering to sex tourism, primarily through bars staffed by bargirls. Cities where there is a high incidence of prostitution are Angeles City, Olongapo, Subic Bay, Legazpi, Albay, and Pasay City, with the customers usually foreign businessmen from East Asian and Western nations. Prostitution in Olongapo City and Angeles City was highly prominent during the time of the U.S. military Subic Bay Naval Base and Clark Air Base, respectively. When Mount Pinatubo, a volcano, erupted in 1991, it destroyed most of Clark Air Base and the United States closed it down in 1992. Some of the associated prostitution trade closed with it, but when the mayor of Manila, Alfredo Lim, closed down the sex industry area of Ermita in Manila during his first term starting in 1992, many of the businesses moved to Angeles, finding a new customer base among sex tourists. Other tourist areas such as Cebu have also developed a high-profile prostitution industry. Studies estimate that a large number (40-60%) of tourists visit the Philippines for sex tourism.Online dating sites have a large role to play in encouraging this trend. Some girls join the prostitution industry after they become single unwed mothers. The reasons for this vary between the unpopularity of condoms in the Philippines due to a strong Catholic church opposing it Poor / non-existent sex education, lack of a Sex awareness legislation and a feeling of machismo among Filipino males. This normally consists of girls in the 17 to 19 years age bracket (Sex with a girls below 18 is a punishable crime in the Philippines, however it is not uncommon).

Specially,This study will seek answers to the following questions:

1.What is the profile of the respondents in City of San Jose Del Monte Bulacan in terms of the following?
1.1 Gender
1.2 Age
1.3 Civil Status
2.What are the perception of participants on the causes and effects of prostitution existing in SJDM, Bulacan?
2.1 Poverty
2.2 Environment
3.What do you think is the biggest effect of prostitution in the society?
4.What will be the effects of having sexual intercourse with a prostitute to the person who has a disease?
4.1 Acquired Immune Deficiency Syndrome (AIDS)
4.2 Gonorrhea (GONOCOCUS OF NEISER)
5.Why individuals are indulge to this work?
5.1 Family
5.2 Peers
5.3 Environment

The importance of this study could not be under estimated for it means saving pprecious lives, young dreams and idealism; and setting
the future of the country. This research is significant to the following.

To the Women. The respondent are the center of the research; therefore this study will benefit them in order to diminish Prostitution. To the Men. For them to be more aware on the problems women are expose when it comes to prostitution topic. To the Researchers. Knowing the cause of Prostitution will help them to dig deeper into the effect of this social problem. To the Youth.For them to have a basis and to help them to realize the importance of self-confidence. To the Law Makers. For them to have basis in enforcing laws relating on Prostitution. To the Parents. Parents must realize how important the source of encouragement to the youths to become a Prostitute. The result of this study will make them aware on the causes and effects if they engage their child to Prostitution. To the Government Officials. This study will serve as a wake-up call to some local officials who might be negligent on their duties and responsibilities to their constitute. This will be the right time to help the family with financial problems to put-up programs on income-generating so that they will not force of work. To the Future Researchers. For them to have a subject to explore on Prostitution.

SCOPE AND DELIMITATION OF THE STUDY

This study will focus on the cause and effect of prostitution at City of San Jose Del Monte, Bulacan. Specifically, the participants will come from the residence of Tungkong Mangga, Sapang Palay and Muzon.

The limitation of the study will be on the factors that may contribute on the Causes and Effects of Prostitution on the society.

PROSTITUTION. The work of a prostitution, the act of having sex in exchange for money. PROSTITUTE. To use in a way that is not appropriate or respectable and especially to earn money. PARENT. A person who is a father or mother, a person who has a child. POVERTY. The state of one who lacks a usual or socially acceptance amount of money or materials possessions. HUMAN
RIGHTS. Rights , as freedom from unlawful imprisonment, torture, and execution. Regarded as belonging fundamentally to all person. EXPLOITATION. An act or instant of exploiting.

ABUSE. A corrupt practice or custom, improper or excessive use or treatment. Physical maltreatment. YOUTH. The time of life when someone is young. A teenage boy/girl or young man/woman. WOMEN. An adult female human being.

MAN. An adult male human being
TOURISM. The activity of traveling to a place for pleasure.

Causes And Effects of Prostitution. (2016, May 15). Retrieved from https://studymoose.com/causes-and-effects-of-prostitution-essay 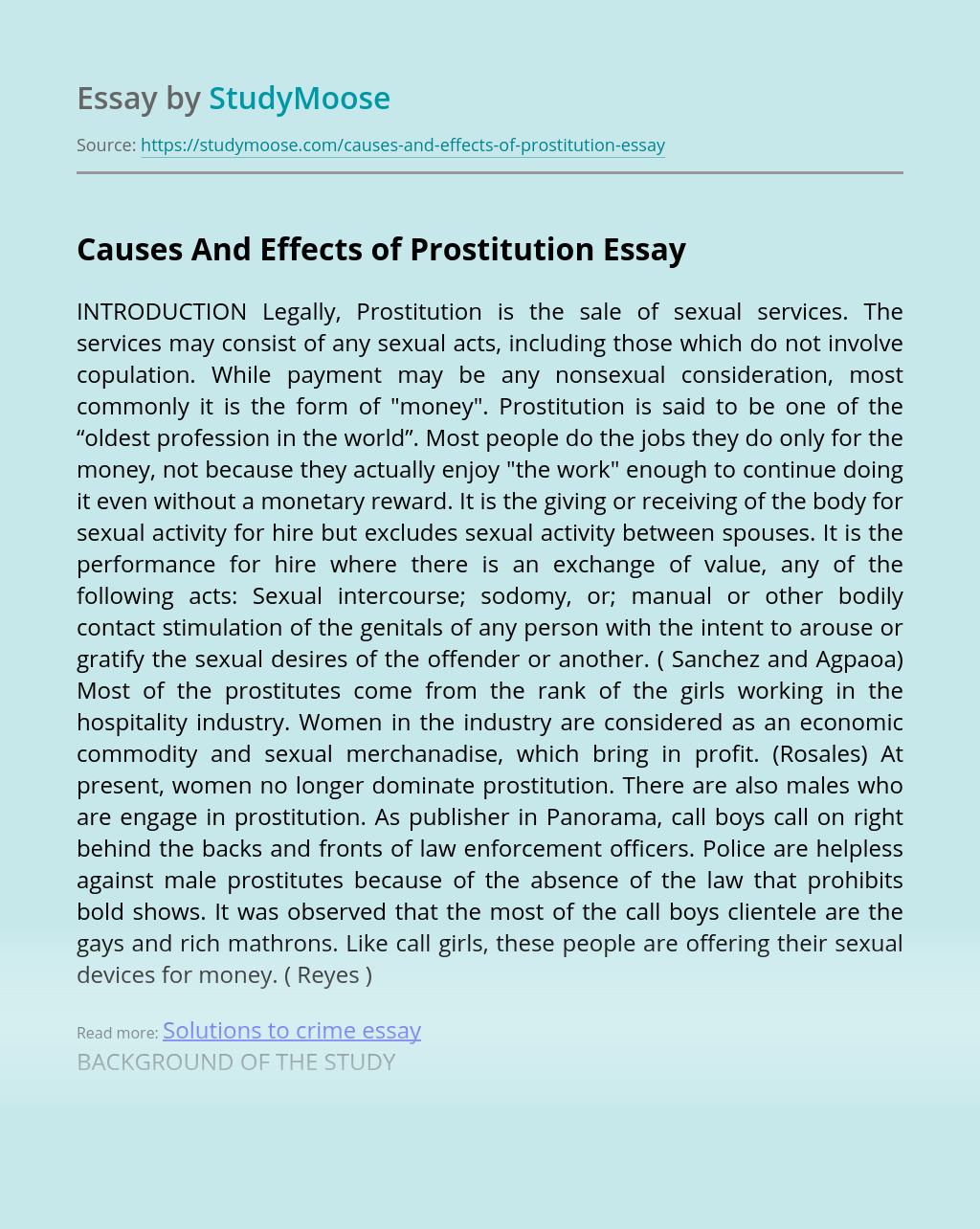