Causes and Consequences of the Reformation

There were several causes of the Reformation. Some of them were short-term causes and others were long-term causes. One of the long-term causes of the Reformation was that many people thought that the Church was not following the Bible. For example, many people were unhappy with the idea of indulgences. Indulgences were gifts that people gave to the Church so their sins would be forgiven. In 1517 Luther nailed his Ninety-Five Theses to the door of a church in Wittenberg, Germany. They spoke against the theory of indulgences.

Turn in your highest-quality paper
Get a qualified writer to help you with
“ Causes and Consequences of the Reformation ”
Get high-quality paper
NEW! AI matching with writer

Another cause of the Reformation was that the Church was having some major problems at the time, other than many people trying to break away from it.

For example, the Great Schism. The Great Schism greatly reduced the Church?s popularity when there was so much confusion over who was Pope. In 1378 the Cardinals in Rome elected Prignano to be Pope, but they soon chose Robert of Geneva to be Pope. Robert called himself Clement VIII and left Rome to Avingnon. Much chaos followed because the Pope was not home to solve problems with Protestants, etc.

A third long-term cause was that the Church owned lots of land.

This was an economic reason. In Germany, for example, the Church owned about one-third of all the land, but it did not pay taxes on it. So the other landowners were forced to pay much higher taxes. To add to that, the Church had the power to collect its own taxes. This made it seem to the people of the German states that much of the money went out of their country and into Rome. In response to this, many European rulers now had a good reason to break away from the Church and collect taxes on the Church?s land. In 1524 German peasants rebelled because of such high taxes. At least 100,000 lost their lives when the revolt was put down.

Yet a fourth short-term cause of the Reformation was that ideas began to spread quicker. For example, Johannes Gutenberg invented the printing press. He made the first printed book in Europe. As more people began to read and understand the Bible, they began to see what the Church was doing wrong. Writers were now able to publish their books and sell them for much less than hand-written books. Many more people owned books now. This is how ideas began to spread. Another way that ideas spread was through traveling students, artists, and writers. As they traveled around Europe, they took their ideas with them.

There were also consequences of the Reformation. Some of them were short-term consequences and some were also long-term consequences. One of the long-term consequences of the Reformation was that many people broke away from the Catholic Church. For example, when Luther came, many people broke away from the Church and became Lutherans. They believed in his ideas that the Catholic Church was nonreligious and thought it fair to break away. Another group of Protestants in Europe was the Anabaptists. This group of people in Switzerland followed Ulrich Zwingli. This group of people was much like the Lutherans, but they believed that people did not have to be forced to go to Church. Other people broke away and became Calvinists, following John Calvin and his idea of predestination. Calvinism was also much like Lutheranism, but Calvin believed that God had already set a fate or destiny for people. In France, Calvinists were called Huguenots.

Another consequence of the Reformation was that many rulers, like Holy Roman Emperor Charles V, tried to stop the Protestants. Charles V was not unsuccessful, though. In 1555, he and the German princes signed a treaty called the Peace of Augsburg. This agreement forced Charles V to recognize the Lutheran Church. He could no longer have any affect on the local religion. In France there was a giant dispute between the Catholics and the Huguenots. The French rulers made an attempt to end the violence in 1572 with a marriage between the rulers of the two opposing groups, but they failed.

Finally, in 1598 King Henry IV issued the Edict of Nantes, allowing the Huguenots to continue their practices peacefully and ending the violence. Another example of this consequence is when Zwingli tried to establish his Anabaptist church in Switzerland he was attacked. The leaders of Switzerland ended the conflict in 1531 and allowed each local government to choose the religion of their canton themselves. Through all of these attempts to stop the Protestants, the Catholic Church lost a big part of its influence and money, and the national governments gained more money and power.

A third consequence of the Reformation was that the Catholic Church was finally forced to reform itself. This was a huge change for the Church. They appeased both the reformers and the conservatives, emphasized good deeds, gave people more free will, banned books, put the Pope in charge, and revived the inquisition. Although the Church lost lots of money during the Reformation, peace finally followed.

Causes and Consequences of the Reformation. (2016, Jun 26). Retrieved from https://studymoose.com/causes-and-consequences-of-the-reformation-essay 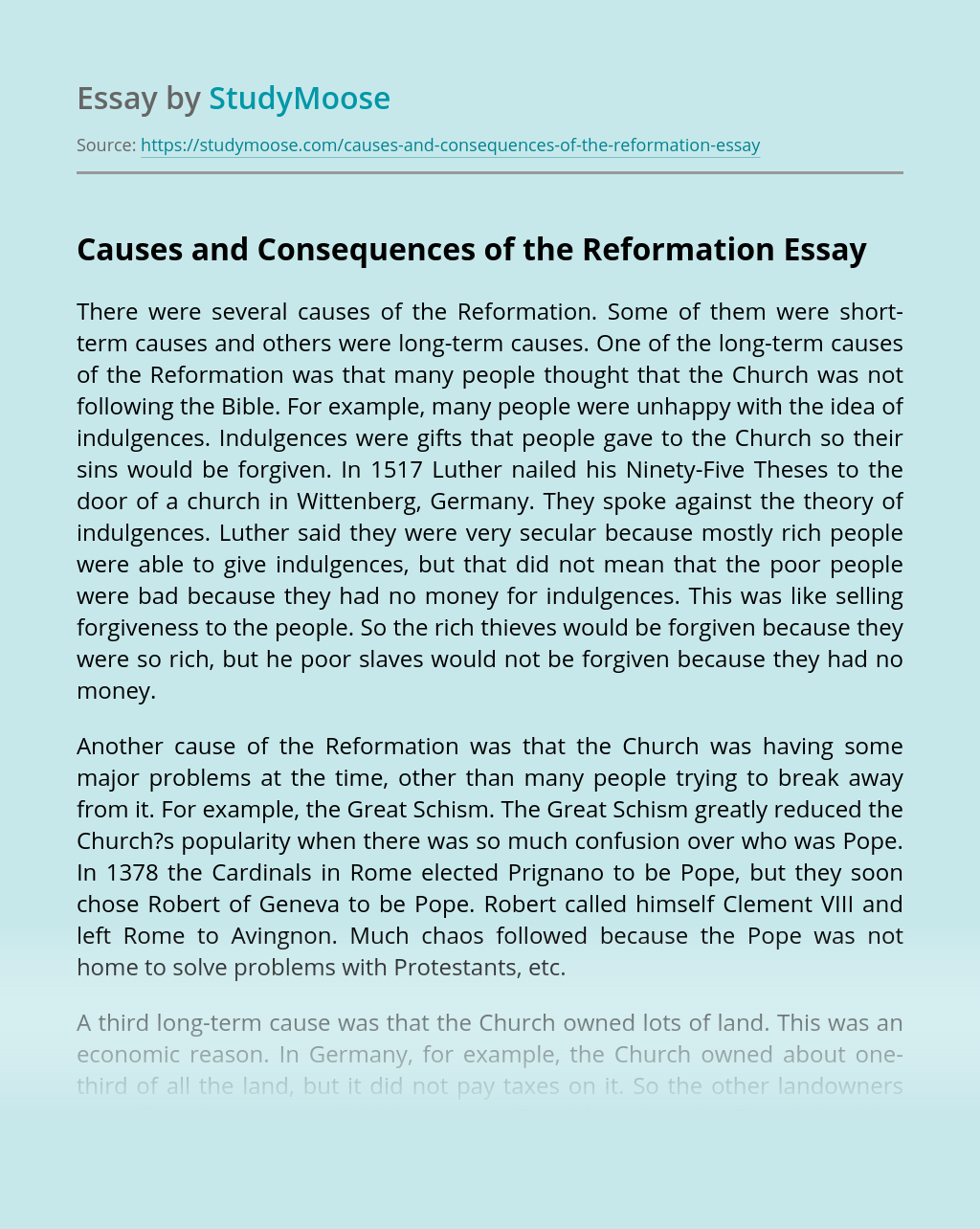 Turn in your highest-quality paper
Get a qualified writer to help you with
“ Causes and Consequences of the Reformation ”
Get high-quality paper
Helping students since 2015
Stay Safe, Stay Original