How does cat in the rain use and deviate from the traditional codes, functions, roles and structure of folk tale morphology?

Morphology means the study of forms, their component parts and their relationship to each other and the whole in 1928 Vladimir Propp wrote ‘morphology of the folk tale’. This involved Propp studying a group of fairy tales and then breaking them down into functions, a function can be described by “function is understood as an act of a character, defined from the point of view of its significance for the course of the action” Propp then came up with seven characters these are:

– Dispatcher: sends hero on his mission

– False Hero: claims to be hero but is unmasked

In Propp’s functions it starts with an ‘initial situation’ this means the members of the family or hero are introduced.

Don't use plagiarized sources. Get your custom essay on
“ How does cat in the rain use and deviate from the traditional codes, functions, roles and structure of folk tale morphology? ”
Get custom paper
NEW! smart matching with writer

This happens at the start of ‘cat in the rain’. “There were only two Americans stopping at the hotel”.

The readers are now introduced to the family or a potential hero. When it says “only two” this could mean they are hiding and alone.

The story begins with a description of the surroundings. At first the text begins to seem positive, “there were big palms and green benches in the public garden”. This could mean that this is the description in summer or spring; this could also mean that it is a nice place to be and a romantic get-away.

Then it carries on describing the surroundings in the rain.

This creates an atmosphere that is sad, cold and unfriendly. This is proven by Hemmingway using words like “empty” and “the motorcars were gone”. A war monument is also mentioned, this could mean importance but as it is raining the importance of it is being dampened. The war monument is mentioned three times, like could mean that there is going to be conflict.

When the woman sees the cat she wanted it instantly. This could connect to two things. Her motherly instincts or her acts like a child.

Her connecting to the mother is because she has no children of her own and wants to feel like a woman. “I get so tired of looking like a boy”. The kitty could symbolise a baby some to love and care for, as she wants to protect something that is innocent and vulnerable.

The child side of this is she feels like she needs to protect and cat and only children usually want to protect the animals that are out in the rain. She uses child like words as well which could mean that she hasn’t actually grown up herself. “I wanted a kitty” She also uses the word kitty instead of cat; children usually tend to refer to cats using the words kitty. So the proairetic code for this would be: Why did she want the cat? Why did she feel the need to have the cat?

The Symbolic code for this could be that she is searching for herself and to have something to care for and love could make her grow from a child to a woman. To have that cat she would slowly notice the women inside her. Here she might realise ‘mirror stage’ when the child realises that they are separate from the mother and the rest of the world at this point the child becomes an individual. To have the cat she may realise that she is her own women and she is separate from her mother and her husband. Only when she works out who she is though, only then can she move forward with life.

The wife meets the patron downstairs while she is going to get the cat. The woman likes the patron. The padrone treats her nicely and with respect. “She liked the way he wanted to serve her. She liked the way he felt about being a hotel-keeper, she liked his old, heavy face and big hands”. The patron is seen as the ‘helper’ in this story. The padrone makes her feel more grown up and treats her more like a lady then a child.

“The padrone made her feel very small and at the same time very important” This is two parts of her personality. The child like side of her feels intimidated because of this grown-up important man standing in front of her and the motherly/adult side of her feels like he is putting her first, showing that he cares about her and she feels flattered.

The padrone then sends a maid with an umbrella so that the woman doesn’t get wet. This shows that that padrone is a helper to the woman.

When the woman comes back to the hotel room the husband is still reading. “I wanted it so much; I don’t know why I wanted it so much. I wanted that poor kitty” The woman wants the cat because she wants something to care for, to feel responsible for, and to make her feel grown up.

The husband could also be a false hero in the story. This could be because maybe the husband enjoys having his wife being like a child because he can have her under control and if she becomes a women she will want more power.

The female sign means love and goddess. The sign also looks like a mirror and in the story she looks at a hand mirror. “She went over and sat in front of the mirror of the dressing table looking at herself with the hand glass” With her looking at her profile could this be that she is a goddess or is she a nobody.

At the end of the story the women gets the cat. “In the doorway stood the maid, she held a big tortoiseshell cat pressed tight against her and swung down her body” This could mean that the women is finally realising that she is becoming a women. The padrone had sent it to her so in the end the helper has provided the hero with the magical agent.

How does cat in the rain use and deviate from the traditional codes, functions, roles and structure of folk tale morphology?. (2020, Jun 01). Retrieved from https://studymoose.com/cat-rain-use-deviate-traditional-codes-functions-roles-structure-folk-tale-morphology-new-essay 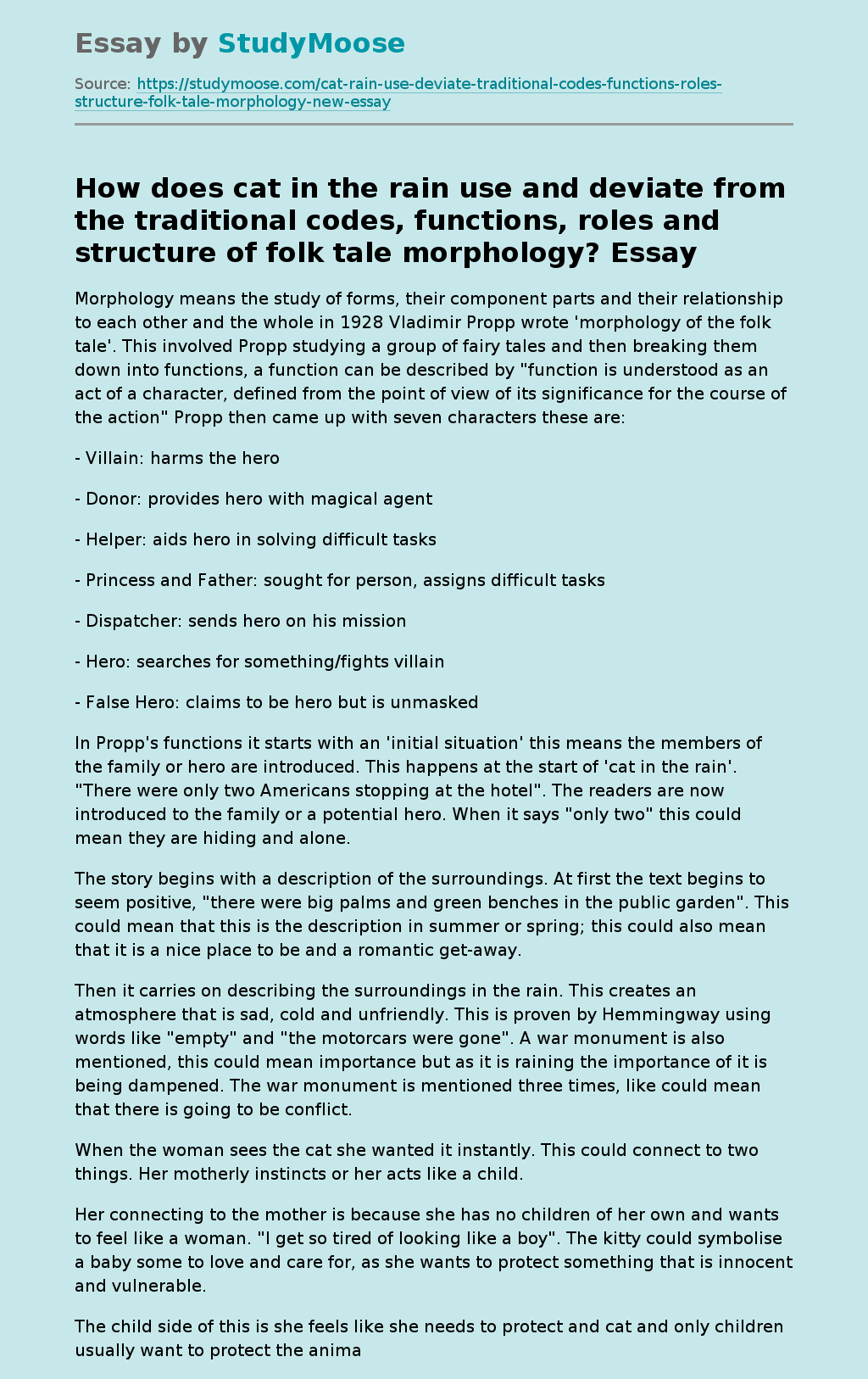